July at last! It is truly my favorite month of the year. Granted, the weather here in Kansas has been a bit wet and wacky, including a series of small tornadoes that hopped down an arterial street during the night of June 8th. Thank goodness the only fatalities were power poles and big old trees.

What makes July so special? First and foremost is the Fourth of July, and when you live on the parade route for a sizable parade, it is a great way to begin a day of family, friends, BBQ, and pool party. When my girls were young we would pack a picnic basket and head out to find the perfect place to sit, eat supper and watch the fireworks.

Picnics played a major role when I was young, even if it was nothing more than my Granny packing a couple of sandwiches and a thermos of iced tea into her wonderful picnic basket, spreading a blanket under the mimosa tree in the backyard, and the two of us sitting down to eat lunch.

Granny’s picnic basket was purchased with Green Stamps. It was an oval wicker basket, and inside it held lavender-colored Melmac plates, cups, Bakelite handled cutlery, and there was still plenty of room to pack some food. That picnic basket saw many years of use. 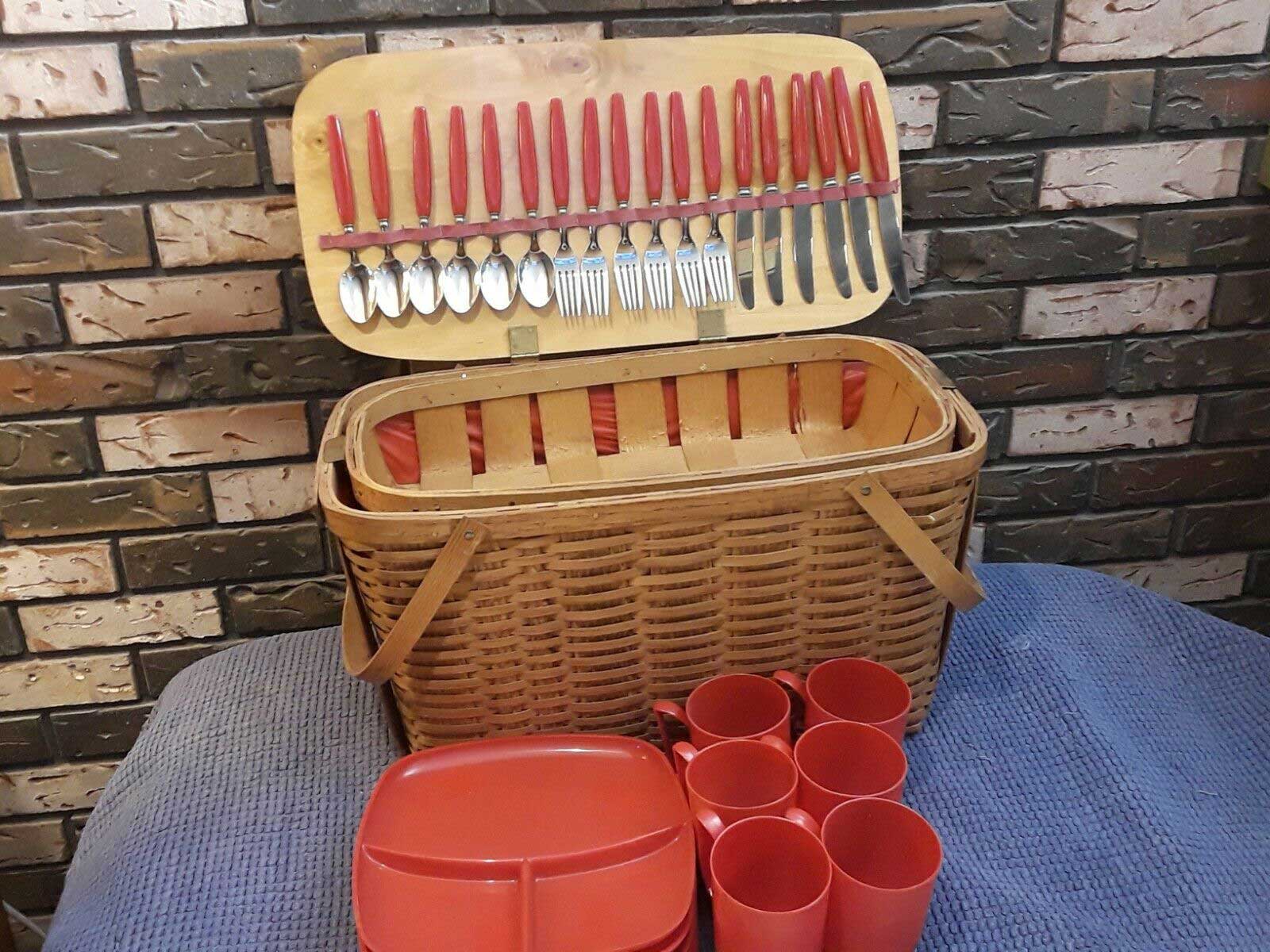 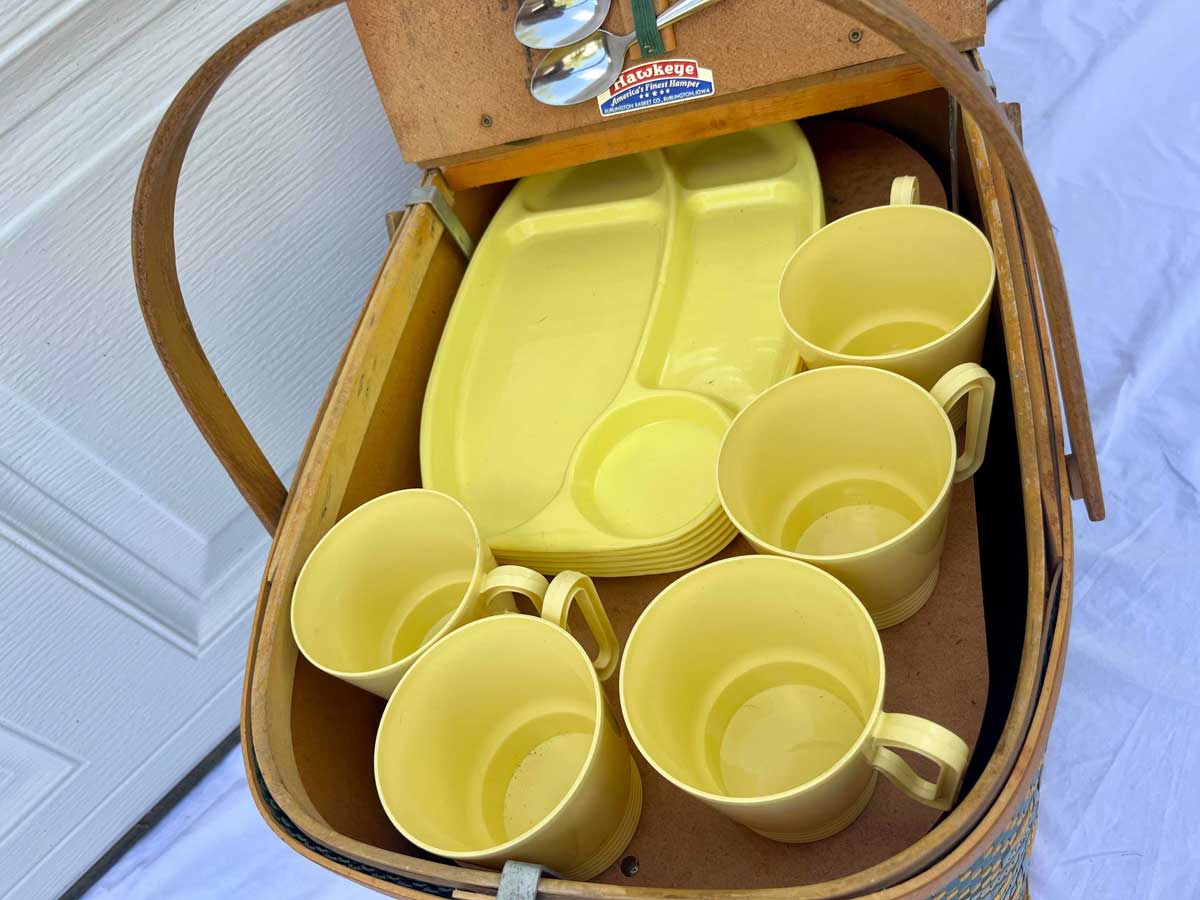 Plastic has undergone a variety of changes since the Middle Ages when it was made from bone to make window panes. There was Parkesine, invented in 1855, and it is considered the first man-made plastic.

In 1893, Galalith, made from milk and a few chemicals, came into being. It was popular in making costume jewelry, buttons, and other small items. The year 1869 brought Celluloid, which eventually become the first financially successful plastic product. The world’s first fully synthetic plastic was Bakelite, invented in 1907. There were a few more evolutions and then during World War II along came a thermoset plastic that could be heated and molded into affordable, mass-produced dinnerware. This wonder plastic was called Melamine. It was more stable than Bakelite and Celluloid, meaning that it would not burst into flames if placed near heat.

Melamine was sent to the troops, schools, and hospitals. After the war, families were spending much more time outdoors and of course, they did not want to bring the fine china out so they used Melamine or Melmac as it had been termed by the American Cyanamid Co., and the rest is history. Melmac was made in any color that you can think of. Even Russell Wright got in on the action. Other names you see are Texas Ware, Boontonware, Raffia Ware, Mar-Crest, Jerywil, and others.

Melamine or Melmac was perfect for picnic baskets such as the one my Granny had and you can still find vintage picnic baskets filled with the miracle plastic dinnerware at a reasonable price. There is also the opposite end of the picnic basket spectrum, the deluxe package with crystal glassware, silver cutlery, and china dishes. Some can even be found with a small stove and coffee or tea pots. The fancy picnic basket setups were more than likely not available at the Green Stamp store and while you do see some that were made in the USA most come from the UK or other areas of Europe.

I hope that this article inspires you to get a picnic basket, a blanket, and go somewhere peaceful with someone you love and dine in the great outdoors with minimal fuss. If you have little people in your life, now is a good time to start a new tradition. My memories of my Granny and me are just as vivid fifty plus years after the fact as they were when I was young. Come to think of it, that picnic basket went with us everytime we traveled out of town to visit family.

Prices for a picnic basket with Melmac dinnerware can be found online for $50 or less. Prices for the deluxe picnic “boxes” sell for several hundred dollars up to $6,000 depending upon the contents.

Melmac, even the new pieces, cannot be put in the microwave, and if you are going to put it in the dishwasher, use a detergent that does not contain bleach as it will fade the color over time.

Please let me know if there is a topic that you would like to learn more about. I aim to please. 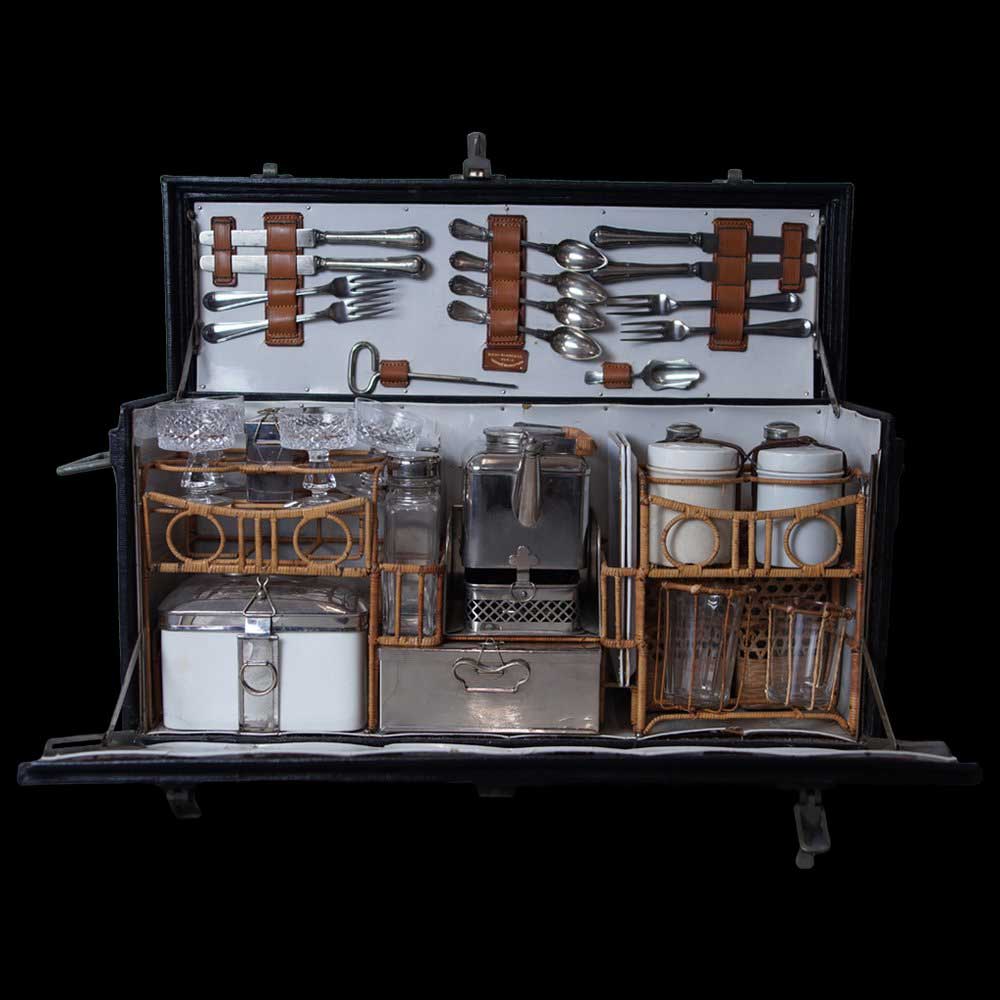 Circa 1900 British-made picnic basket with stove

Circa 1900 British-made picnic basket with stove

June 2022Michelle Knows Antiques Vase has ties to famed explorer Ponce de Leonby Michelle Staley I love doing this type of appraisal. I have to dig into the history of a location and sleuth about to find the truth. Please keep in mind that I don’t often publish a paid...

END_OF_DOCUMENT_TOKEN_TO_BE_REPLACED

April 2022Michelle Knows Antiques Serving bowls originated from German maker in Franceby Michelle Staley This serving bowl and platter were made by Charles Ahrenfeldt, a German porcelain decorator while working in the Limoges region of France. (Image courtesy of the...

END_OF_DOCUMENT_TOKEN_TO_BE_REPLACED

February 2022 Michelle Knows Antiques Auction find may turn out to be a treasure... or not by Michelle Staley Well, folks, it has happened again. Someone purchased an item at a sale for very little money and later found that they owned a treasure. In 2016 a gentleman...

END_OF_DOCUMENT_TOKEN_TO_BE_REPLACED

January 2022 Michelle Knows Antiques Giveaways helped promote businesses in the 19th & 20th centuries by Michelle Staley Welcome to 2022! Welcome to 2022! I hope that the new year finds you well and thriving. Recently a friend and I were talking about all of the...

END_OF_DOCUMENT_TOKEN_TO_BE_REPLACED

December 2021 Michelle Knows Antiques Cupboard painted by mid-century folk art favorite by Michelle Staley   ​Question: I inherited this cabinet with three canisters and three plates that are 9 inches in diameter. I don’t know anything about it other than it...

END_OF_DOCUMENT_TOKEN_TO_BE_REPLACED

November 2021Michelle Knows AntiquesThe Curse of the Crying Boyby Michelle Staley  It’s fall, so I would like to start with story that has been making the “haunted” or “cursed” circuit for many years: The curse of “The Crying Boy.” In September 1985, a British...

END_OF_DOCUMENT_TOKEN_TO_BE_REPLACED

Image courtesy of Michelle StaleyOctober 2021Michelle Knows AntiquesSupplies remind us of back-to-school days - Part IIby Michelle Staley  Several years ago I attended an estate sale and found an abundance of older office supplies and it was half price day. I...

END_OF_DOCUMENT_TOKEN_TO_BE_REPLACED

Supplies remind us of back-to-school days – Part I

Image courtesy of https://onthesamepageelt.wordpress.comSeptember 2021Michelle Knows AntiquesIn the majority of states, the kids are back in school. This year feels like it has passed in warp speed. My “kids” are adults now but I began thinking about some of the...