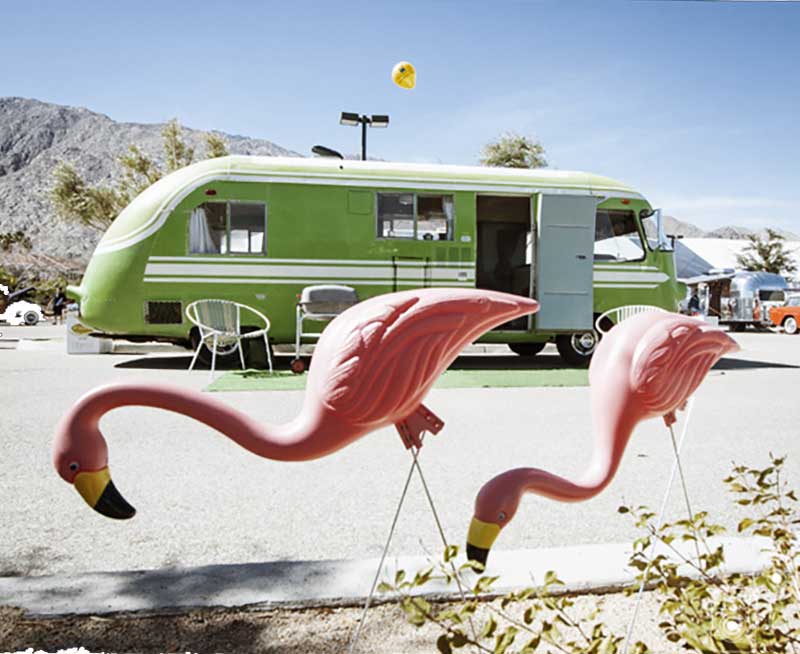 Your home away from home Vintage campers ready for summer adventures

Your home away from home

As temperatures grow warmer and nature calls out to you for yet another summer adventure, many longtime camping enthusiasts are gassing up their vintage campers and hitting the road. The camper had been around since was invented in the 1930s as modes of transportation began an era of steady improvement. Although production of the camper slowed during World War II (the materials needed to be conserved for the war effort), campers exploded in popularity in the years immediately following the war’s end in 1945, as suburbs sprang up around the country and soldiers returned home to start their family. Families who yearned for road trips enjoyed how cost-effective these campers were, and how they allowed travelers to bring their modern conveniences from home and drive right past roadside motels and travel lodges that dotted the landscape. “Although camper travel meant pitching on road sides and traveling for long hours, it proved to be very cost-effective and a much more personal journey than on a train or plane,” according to the website classic-car-history.com. The plywood, aluminum, and fiberglass trailers bore names like DeVille, Shasta and Airstream, standing as a status symbol for middle-class Americans in the post-war years. The camper has been called by many names over the years, but no matter what you call it, it serves the same purpose. “Well, historically, they were all the same thing. Simply put, trailers. Even the industry was unsure if there were any differences,” Tom Heintz writes for Tin Can Tourists, a website for vintage trailer enthusiasts. “I have seen trailers as short as 16 feet called mobile homes and trailers as long as 35 feet called travel trailers by their own manufacturers in the 1950s and ‘60s.” 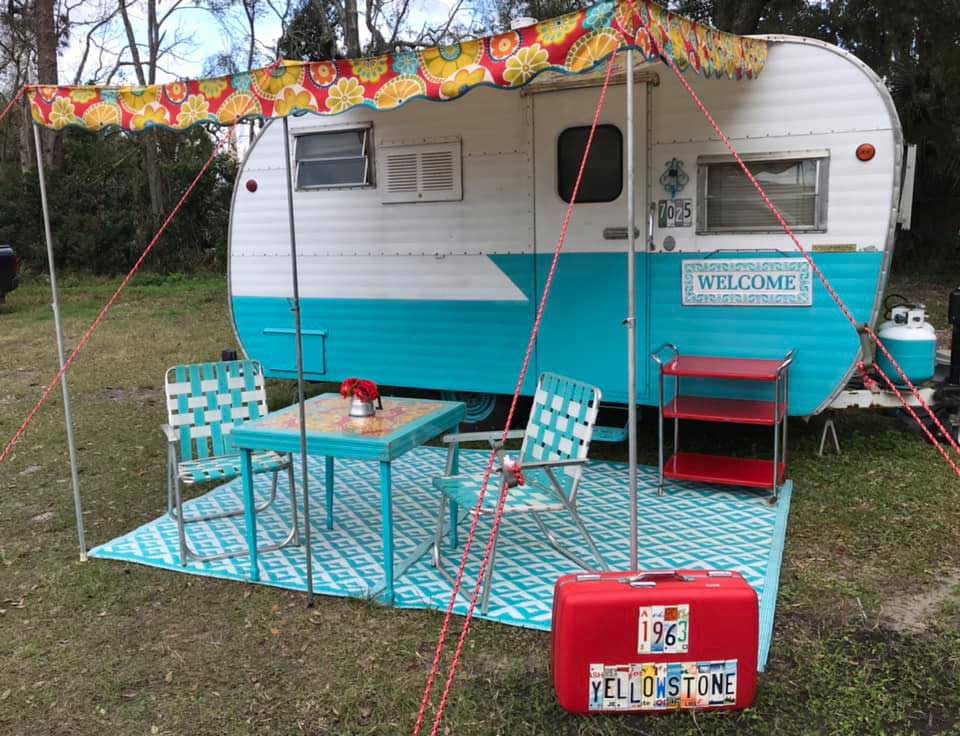 This 1963 Yellowstone camper is a fine exapmle of a Glamper Camper project. (Image courtesy of pinterest)

One of the more distinctive styles of vintage camper is the teardrop trailer, usually stretching out a mere 4 to 6 feet in width and 8-10 feet in length. Designed for only one or two campers, these trailers were sleek in design, their roofs made of curved metal and featuring pop-out back windows, according to the website. They remained popular for being compact, but declined in popularity throughout the 1950s as campers expressed a desire for more space for their growing family. The modern-day “travel trailer,” or RV, and its many iterations proved to be more attractive to campers in groups. Older models didn’t have plumbing, but they did have features like wood-burning stoves designed to both cook food and heat the camper. The later vintage models, with a kitchen, a bathroom, and a sleeping facility, offered a way for families to camp out in style and with all of the modern conveniences of home in tow (some luxurious models included air conditioning, TVs, a water heater and quartz countertops as well). Though travel trailers had been around since the late 19th century, they, too, rose sharply in popularity in the mid-20th century as families grew and people had more disposable income. RV parks began to spring up as campers enjoyed long-term time in nature. The decade of the 1950s saw added improvements in RV and camper technology, including lightweight construction techniques; more powerful gas and diesel engines were added which made RVs bigger and faster, according to The Caravan and Motohome Club. 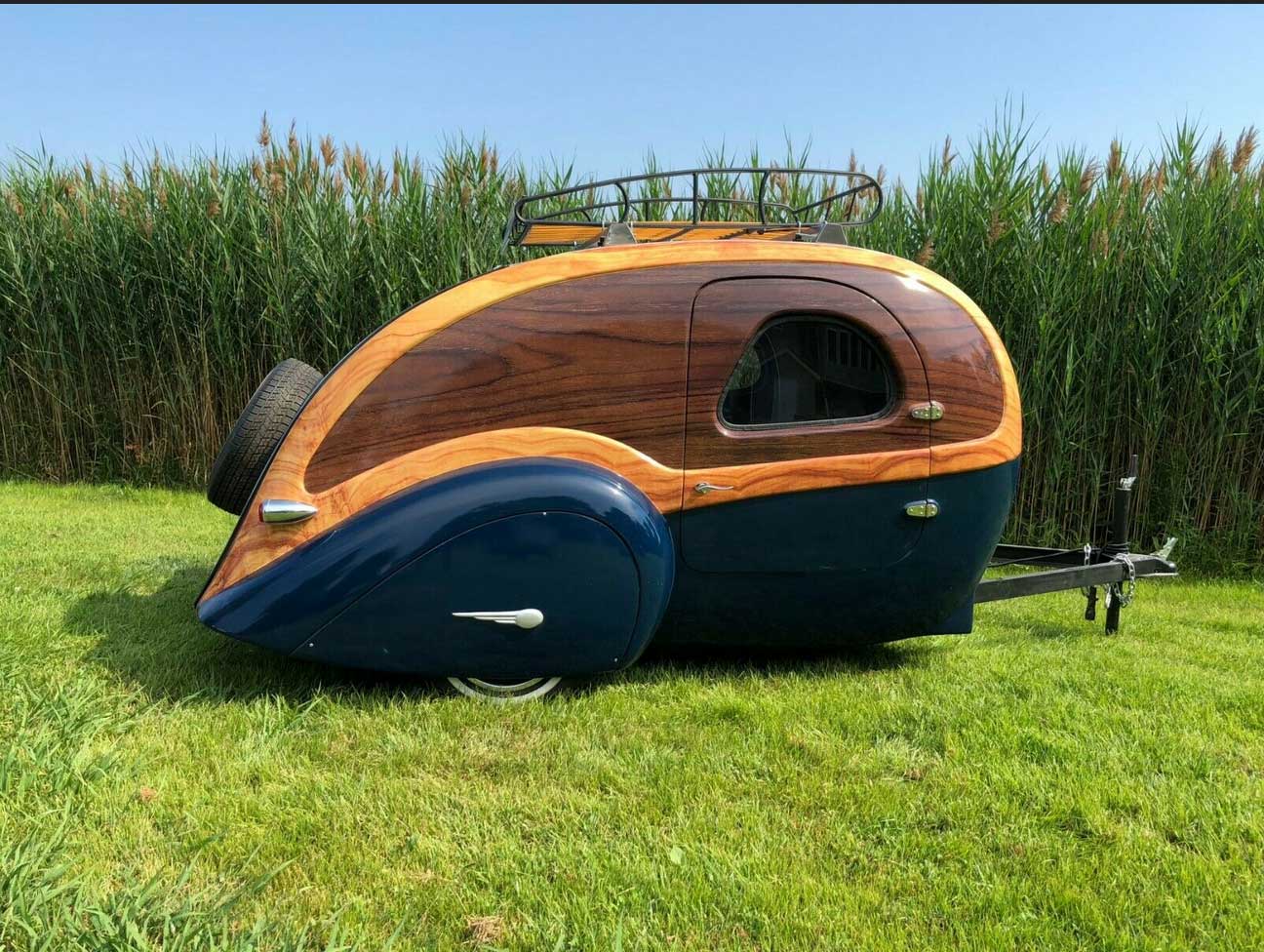 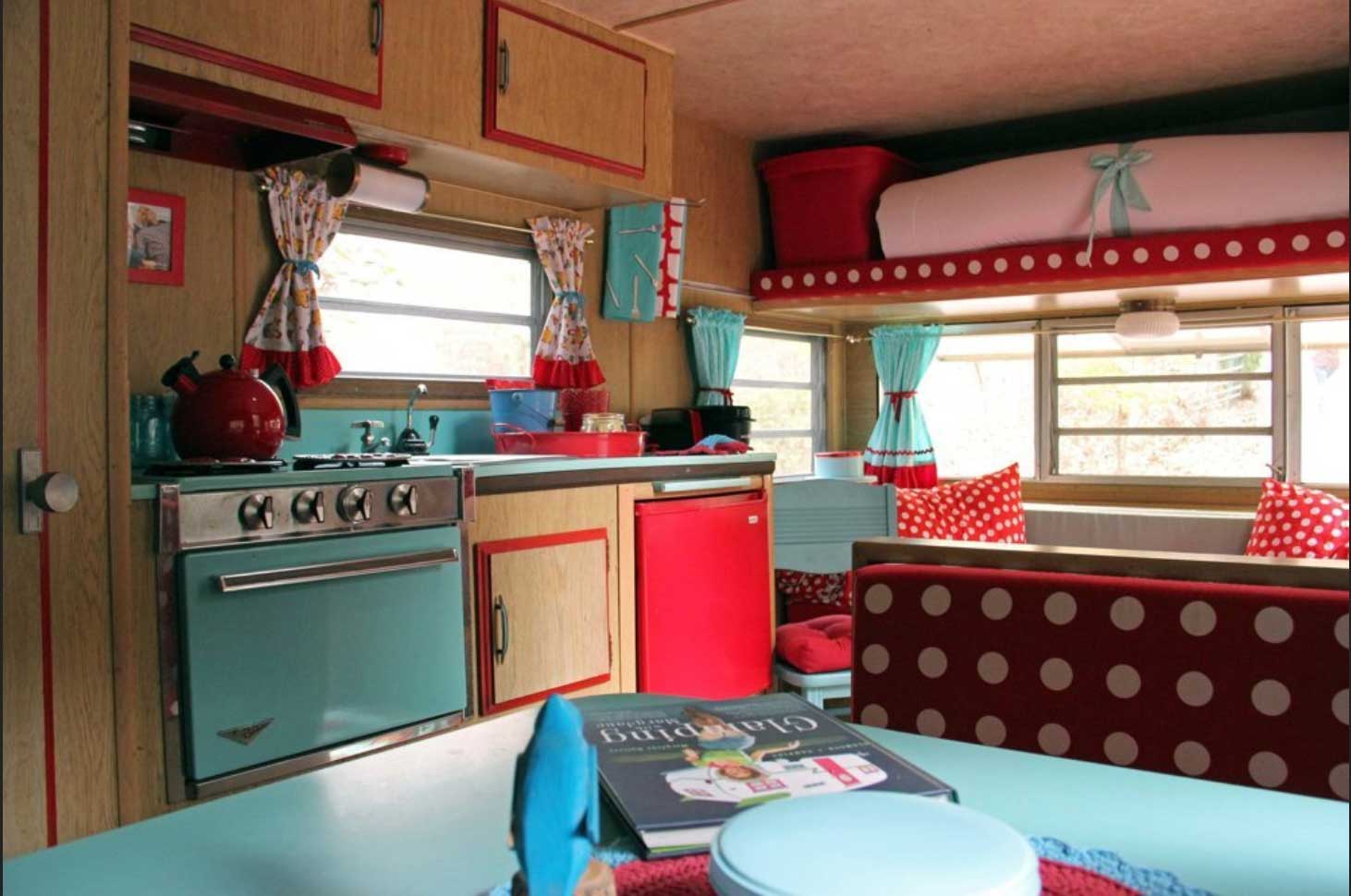 Interior of their 1970s camper trailer

These owners amped up the adorable factor on the interior of their 1970s camper trailer. (image courtesy of countryliving.com)

Living a life off the grid

Of course, there are people who toss aside life in a conventional apartment or house and instead opt to live in their camper or RV full time. A retired person who makes the choice to live in an RV as his or her primary residence is referred to in Australia as a “grey nomad.” According to a November 2018 article in The Washington Post, an estimated 1 million people live full-time in their RV. From the article: “We’re a family of four redefining what the American Dream means. It’s happiness, not a four-bedroom house with a two-car garage,” said Robert Meinhofer, 45, who lives in an RV with wife Jessica and their two children. Another couple, Steven and Joyce Seid, originally from Wichita, KS, traverses the country in their RV during the warmer months of the year. Joyce has decorated the interior with big, beautiful sunflowers, a colorful reminder of Kansas. “This is a great life,” Steven said in the Washington Post article. “We meet the nicest people.” Despite the trend of retirees deciding to live in RVs full-time, the RV Industry Association says that half of new RV sales are going to buyers younger than 45, and nearly 11 million households own at least one RV.

Though modern campers and RVs continue their rise in popularity, the Tin Can Tourists group was founded in 1998 and still has various regional rallies throughout the U.S. In cyberspace, Heintz and the group’s other members post photos of elongated travel trailers, some as long as 50 feet. They also share the original owners’ manuals for their camper or trailer, as well as advertisements and other related ephemera. “My family also has a very long history of pulling such large trailers as full-timers from the 1940s to the 1970s,” Heintz writes. “I still own the pink and white 1958 Skyline (8’x45’) that my parents purchased brand-new in late 1957.” 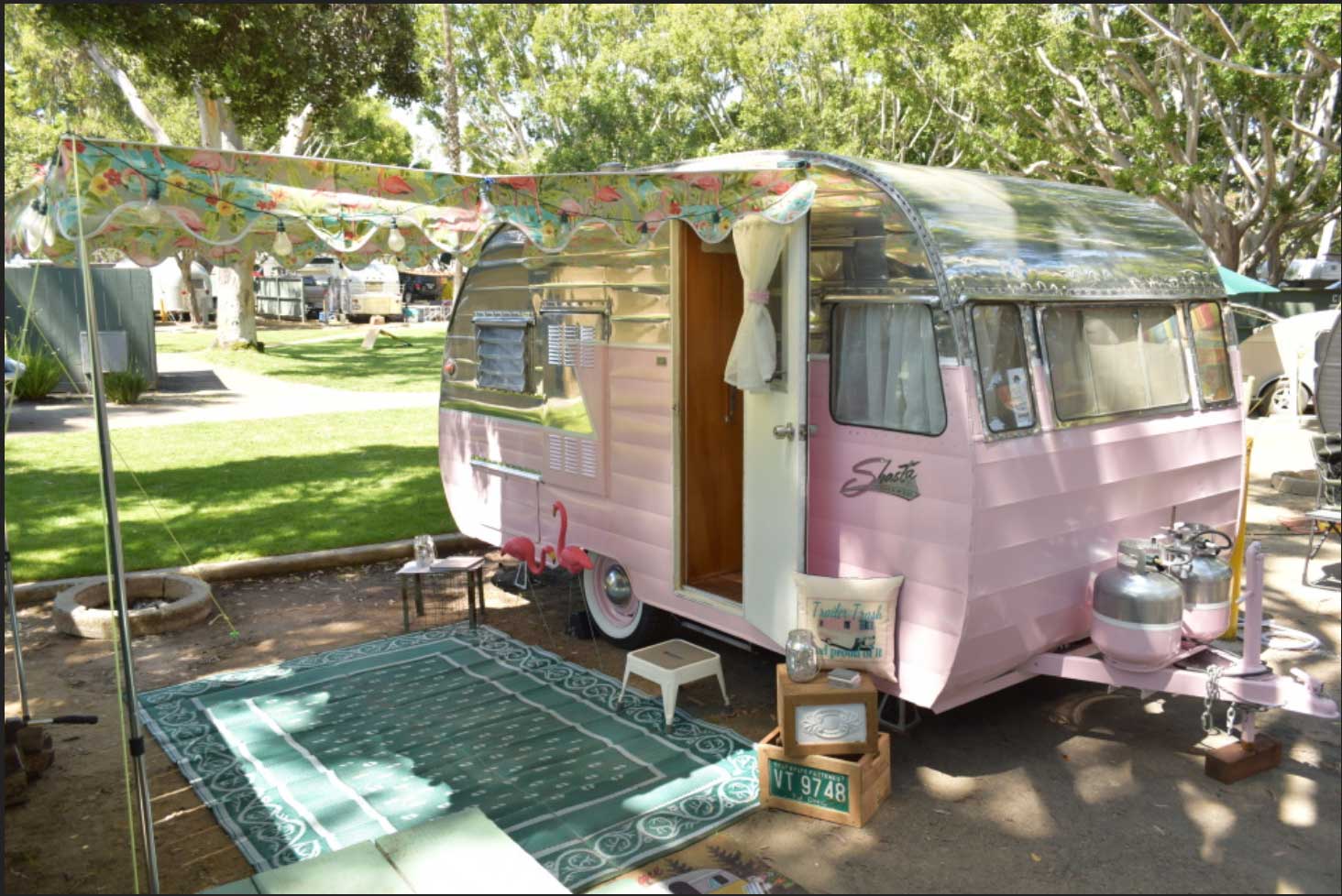 Shasta, originally one of the biggest names in the camper industry, advertised its campers in a way to bring families together in the great outdoors. (Image courtesy of vintagecampertrailers.com) 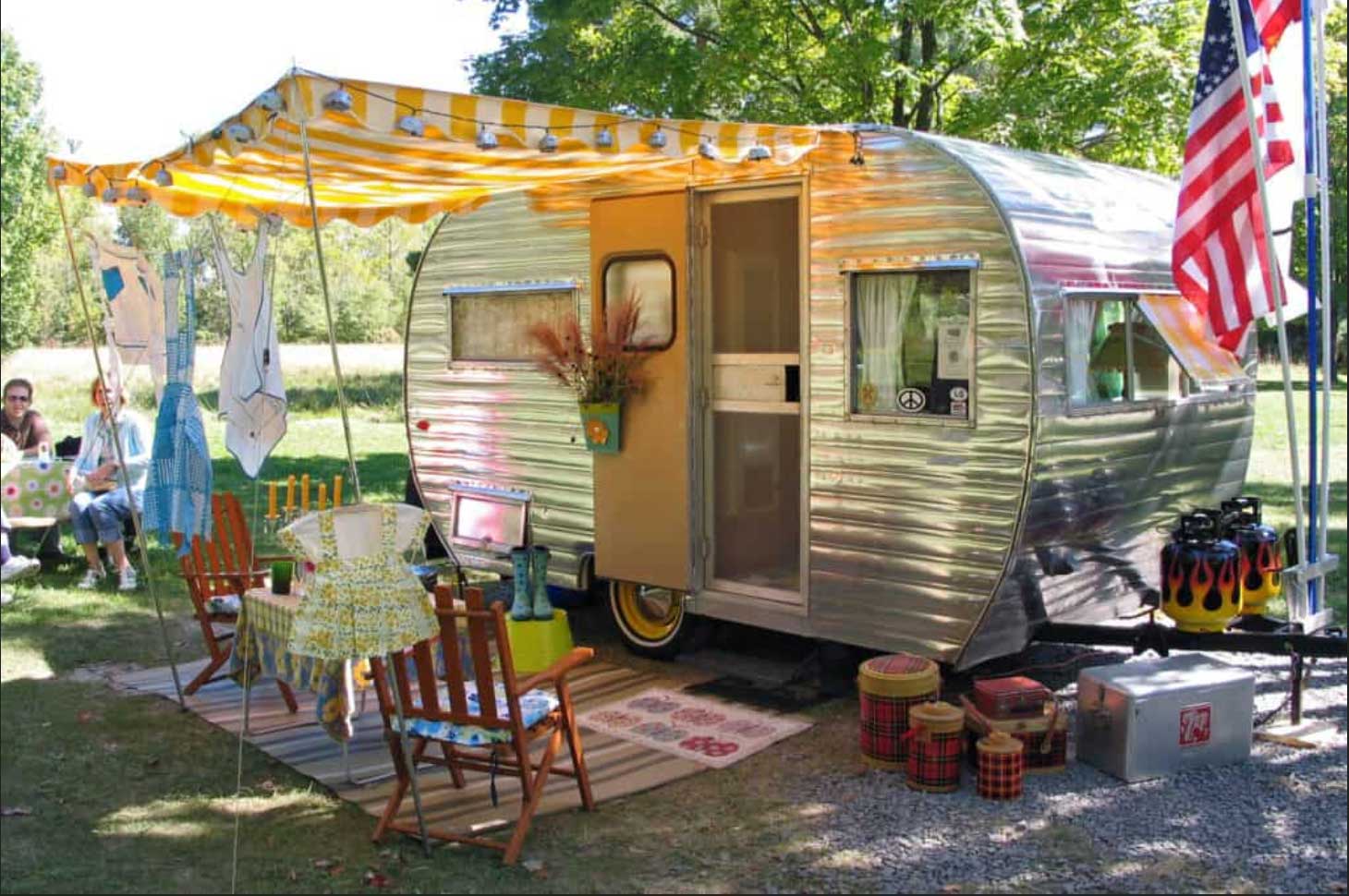 This shining example of a restored camper trailer was featured in Camper Report magazine. (Image courtesy of camperreport.com)

The Tin Can Tourists website also features a classified ad section, where sellers can advertise vintage trailers for sale. The latest offerings in the classifieds section include a 1968 Road Runner ($18,200), a 1961 Shasta Airflyte 16SC vintage trailer ($15,000), and a 1952 16-foot Pleasurecraft ($14,500). If those beauties are a bit out of your price range, you can at least see many on display this summer in our coverage region. In Leasburg, MO, the 2022 Missouri Loves Company Vintage Camper Rally will take place June 2-5 at the Ozark Outdoors Resort (for more information, call 573-245-6837). This is the first year for this particular rally. In Arkansas, the 72 West Vintage Camper Show (at 11507 West Highway 72 in Centerton) will be held June 11 and will include a contest, with entrants vying for best interior, best exterior, and best in show trophies (call 479-206-2491 for more information). 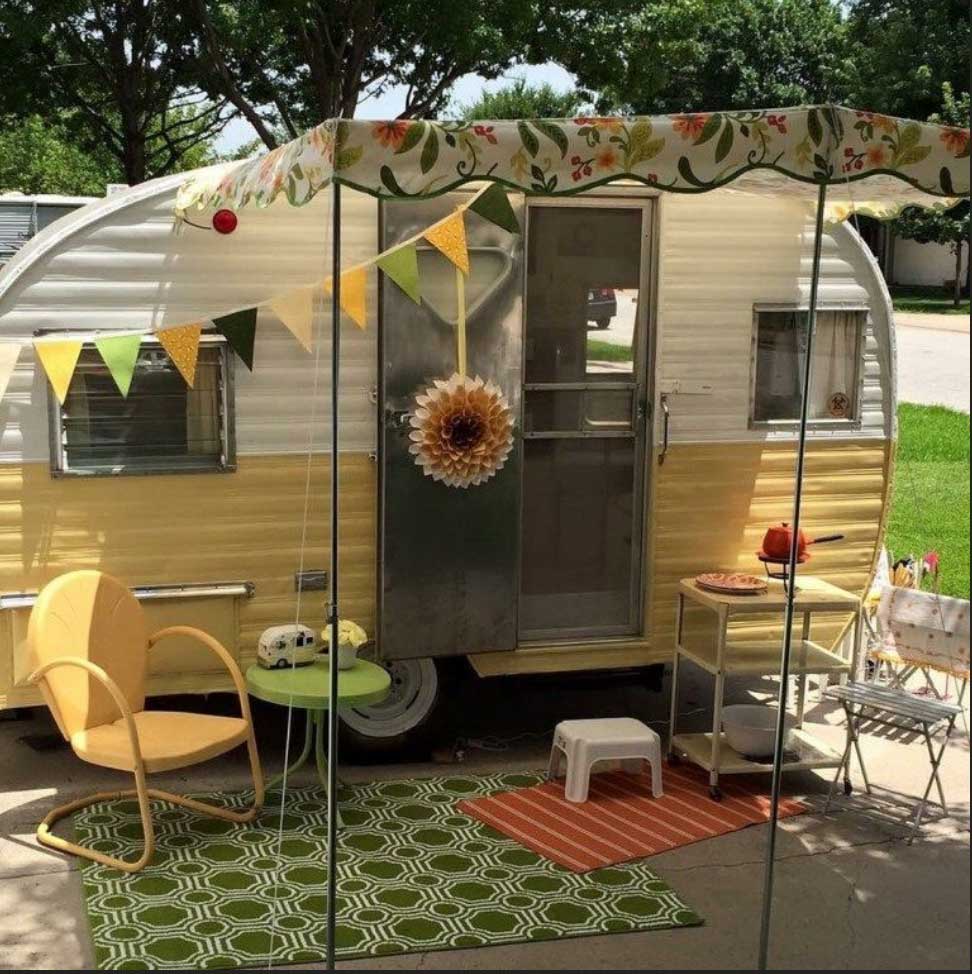 Campers proudly share their campers and restoration projects with others on Facebook. (Image courtesy of Vintage Camper Trailers FB group)

Just like any home, whether it’s tethered to a foundation or on wheels, some of the more common repairs and preventative maintenance for vintage trailers will include asbestos removal. Moisture and condensation also pose dual problems to maintaining a clean mobile living space, with water vapor specifically created by the drying of clothes and the cooking of food having the potential to wreak havoc on the camper’s interior. Tin Can Tourists recommends proper ventilation of one’s camper, and doing everything you can to lower the humidity inside. Tin Can Enthusiasts identifies asbestos as a potentially deadly problem for anyone restoring a vintage camper. “There are numerous items that can contain asbestos in vintage trailers,” according to the group’s website. “Some of these materials include insulation, vinyl tile, and brake linings. If you have a vintage RV, there are several car parts that could contain asbestos as well. Some parts such as the hood liner, various gaskets and clutch plates could have been made with asbestos.” 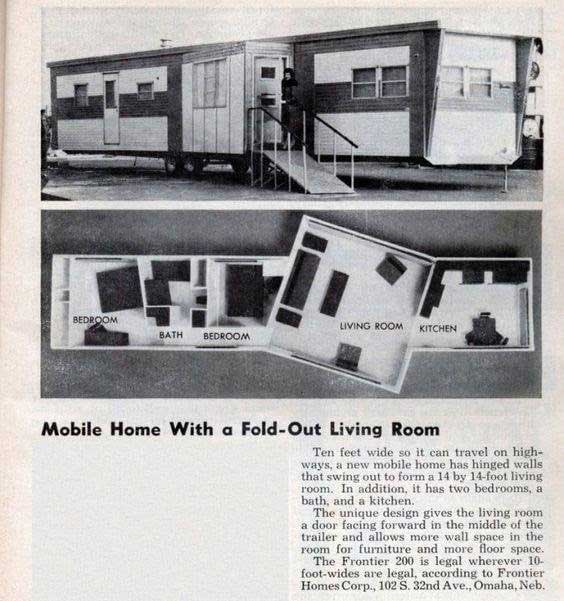 Advertisement for a 1961 Frontier Trailer, which featured a “fold-out living room.” (Image courtesy of Heintz Designs)

No matter the type of vintage camper or the decade in which it was manufactured, the important thing is to get out this summer and enjoy yourself with your own personal style. Vintage camper owners know their aluminum treasure will always attract onlookers with plenty of questions, comments and exclamations. “Vintage trailers are an excellent way to connect to the past while enjoying the great outdoors,” the Tin Can Tourists blog states. “One might be drawn to vintage trailers because of memories camping with their family in an Airstream or traveling to see the national parks, toting a trailer behind the family station wagon. Vintage travel trailers are packed so full of charm and classic features that often evoke nostalgia. No matter the reason, that vintage, polished aluminum Airstream is certain to turn heads cruising into a state park for the weekend.” For more information on vintage campers and the history of travel trailers, or to join the organization itself, visit the Tin Can Toursists’ website at www.tincantourists.com. 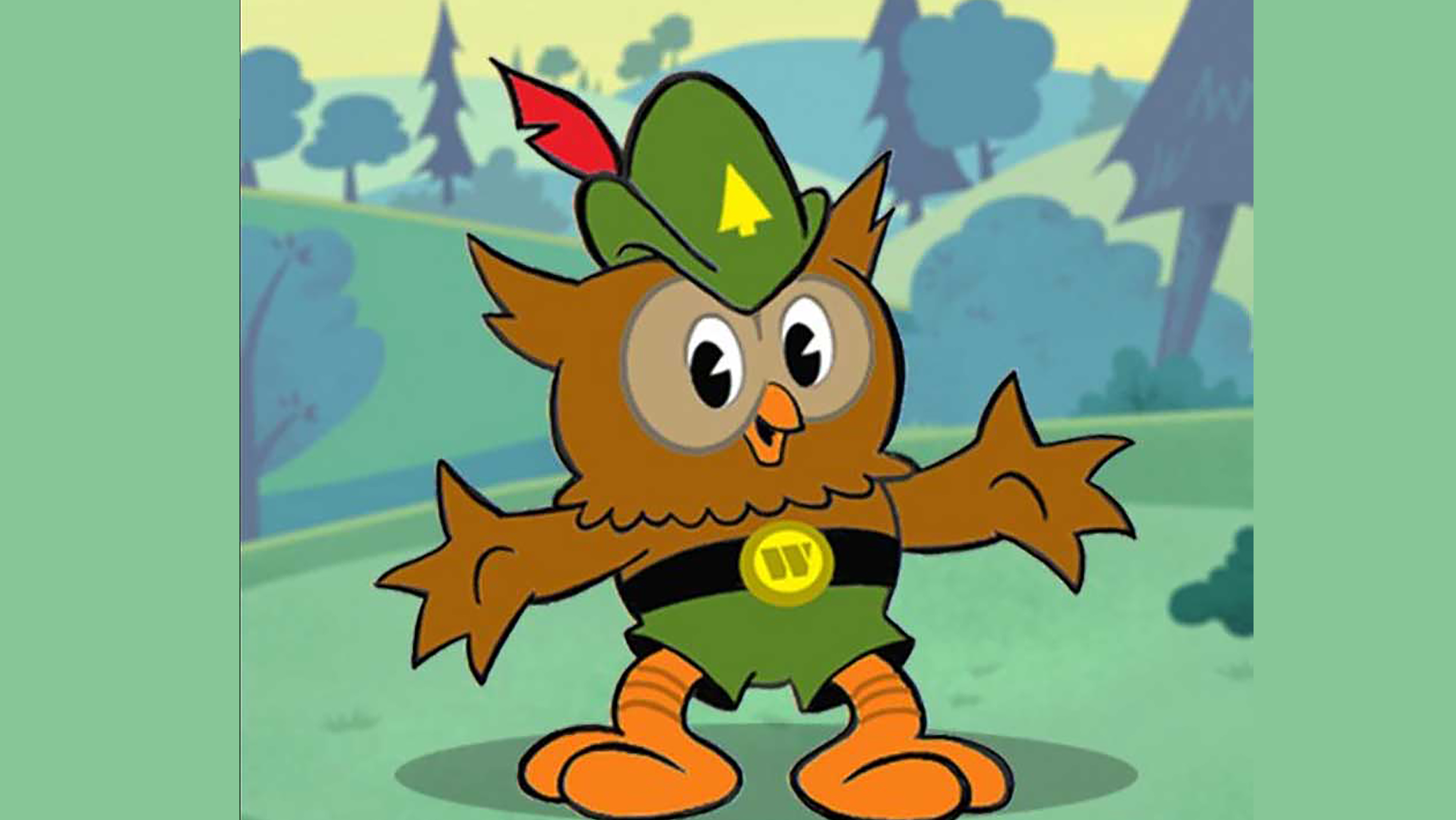 April 2022Cover Story America the Beautiful Ad campaigns deter littering, encourage preservation of country’s natural beautyby Corbin CrableIt’s hard to believe that what we know as recycling today was largely unfamiliar to Americans just a few decades ago. You likely... 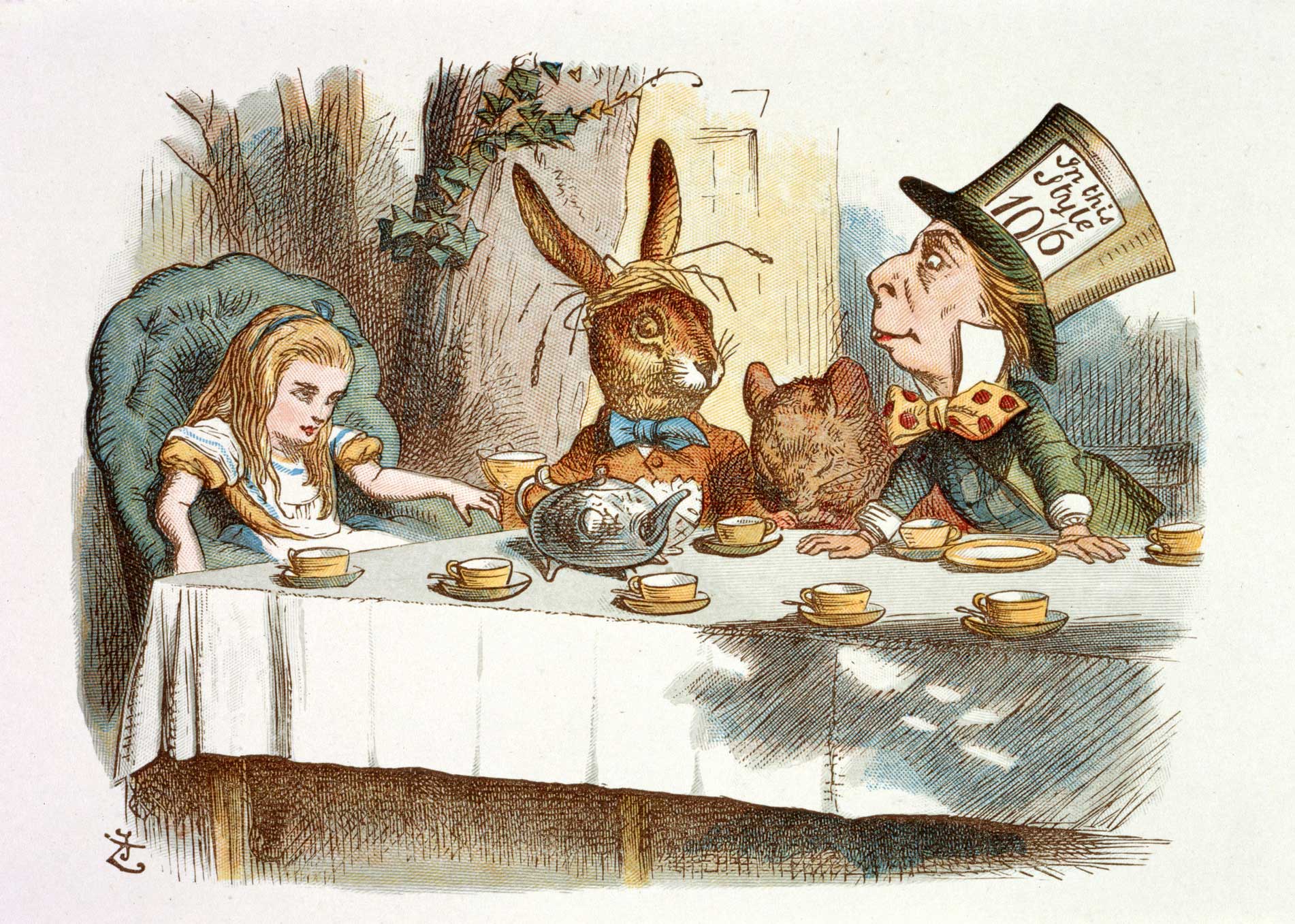 Magic between the pages Children’s literature enjoys a storied history

March 2022Cover Story Magic between the pages Children’s literature enjoys a storied history by Corbin CrableYou remember them fondly from your childhood – you joined them on their adventures in the fantasy worlds they inhabited, and they sparked your imagination, as... 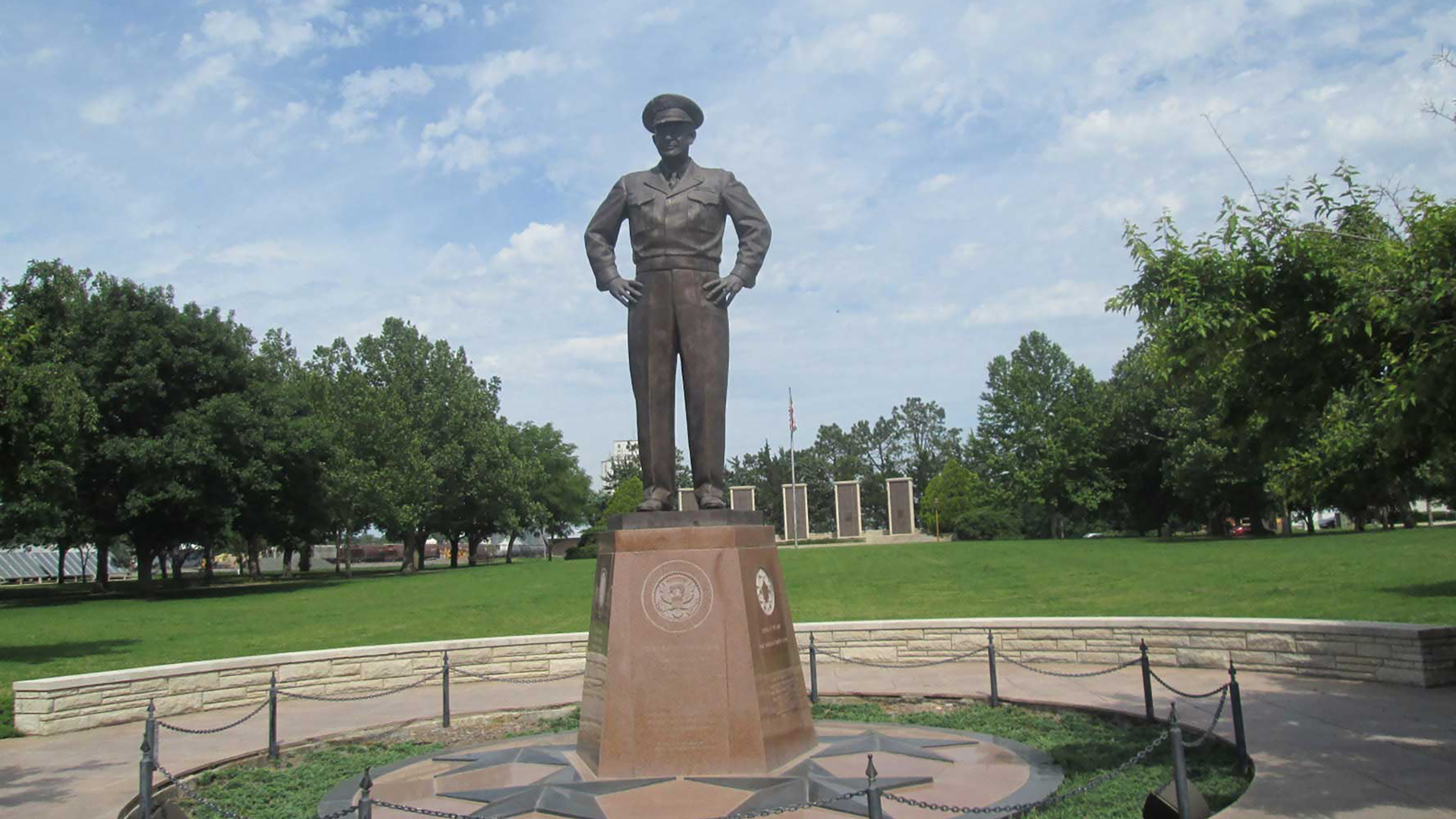 February 2022Cover Story Hail to the Chief Presidential libraries seek to inform, preserve leaders’ legacyby Corbin CrablePresidents’ Day This Presidents’ Day, stick to your New Year’s resolution of taking the time to learn something new and take advantage of a visit... 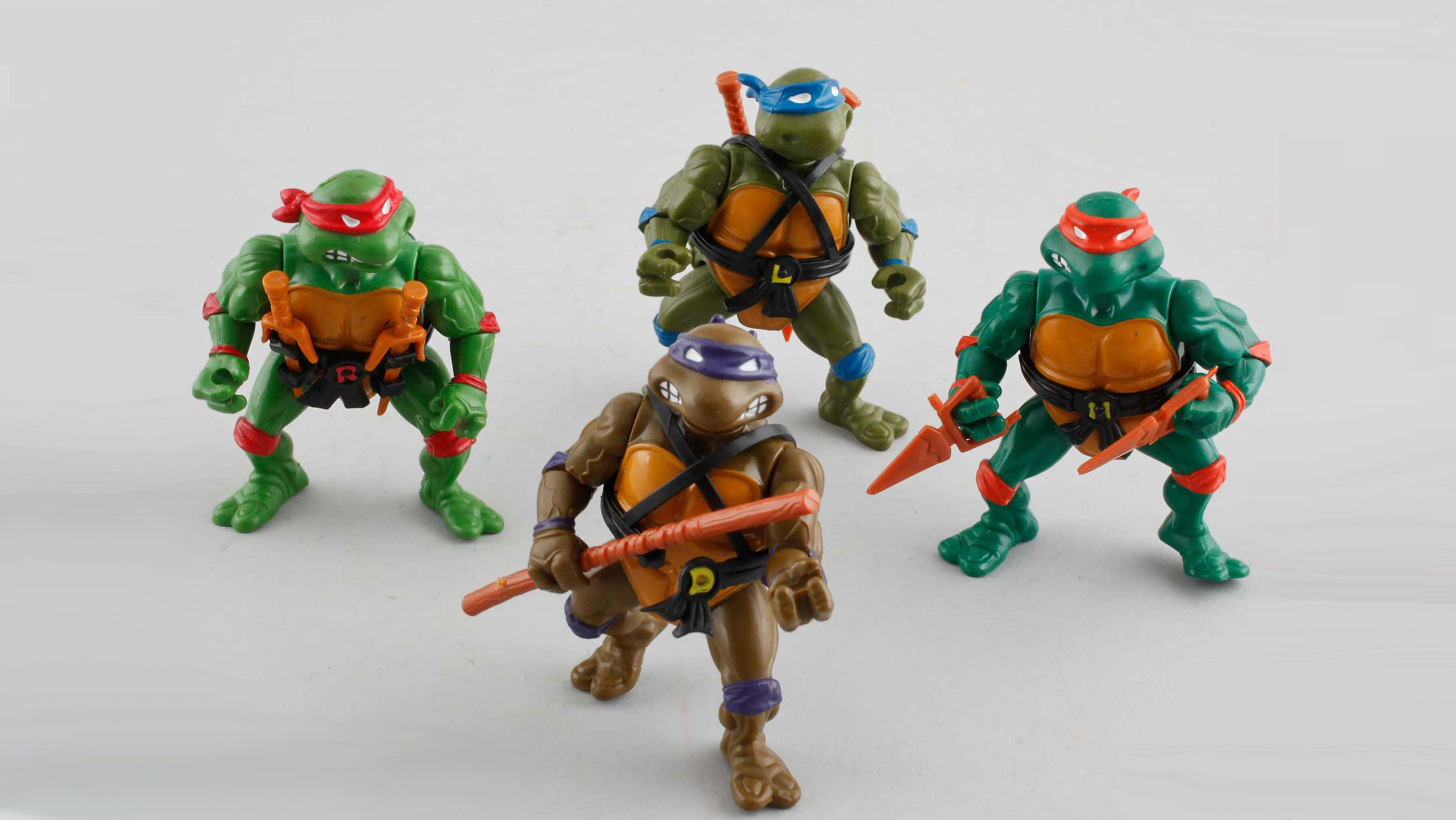 January 2022 Cover Story Like, totally rad!: Gen X collectibles - remain popular, plentiful by Corbin Crable Generation X like I am For those of us of a certain age, the power of nostalgia remains a strong draw when we consider the pop culture influences of our... 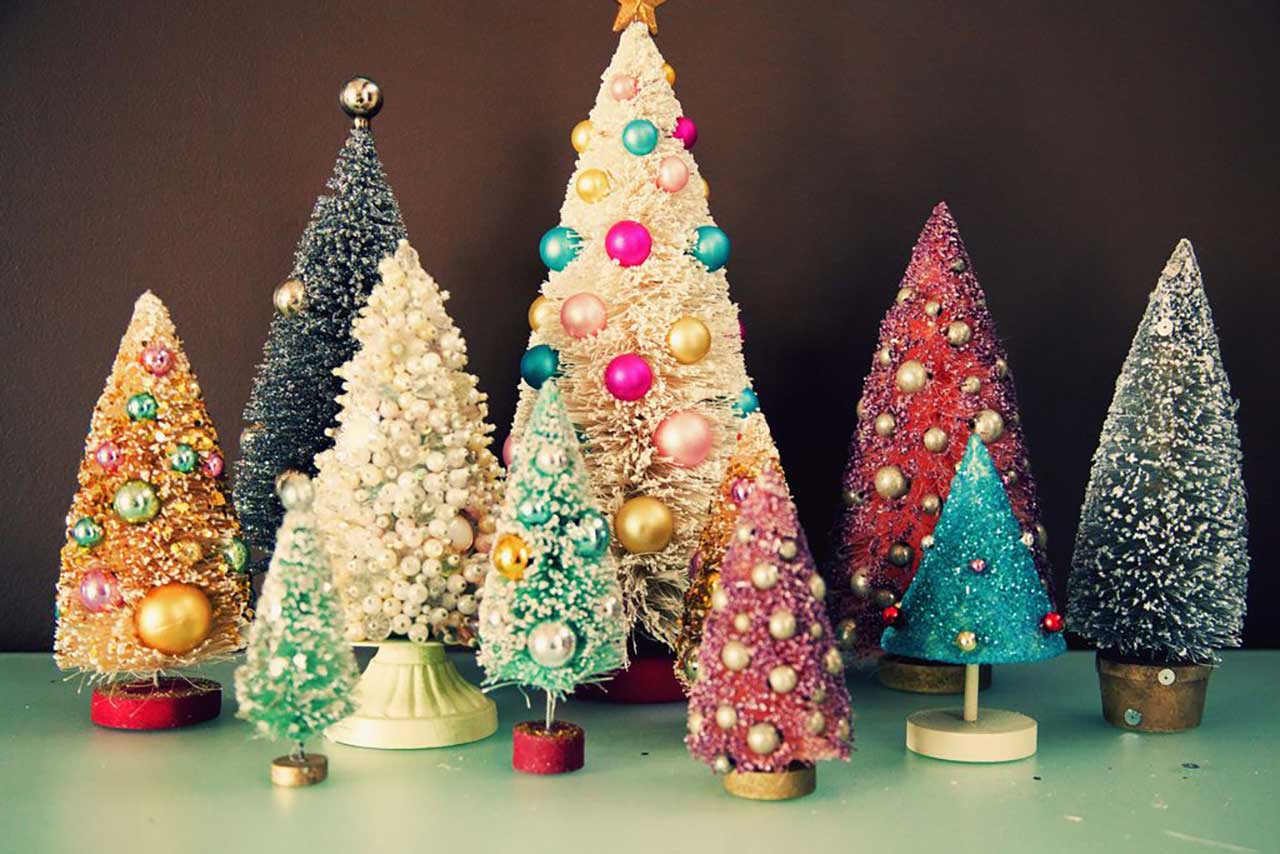 ‘Tis the Season for Gifting

December 2021 Cover Story ‘Tis the Season for Gifting by Corbin Crable   Affordable Gifts for the Antique Lover The holidays, traditionally a time of reflection on days gone by as a new year approaches, hold plenty of opportunities to gift little pieces of the... 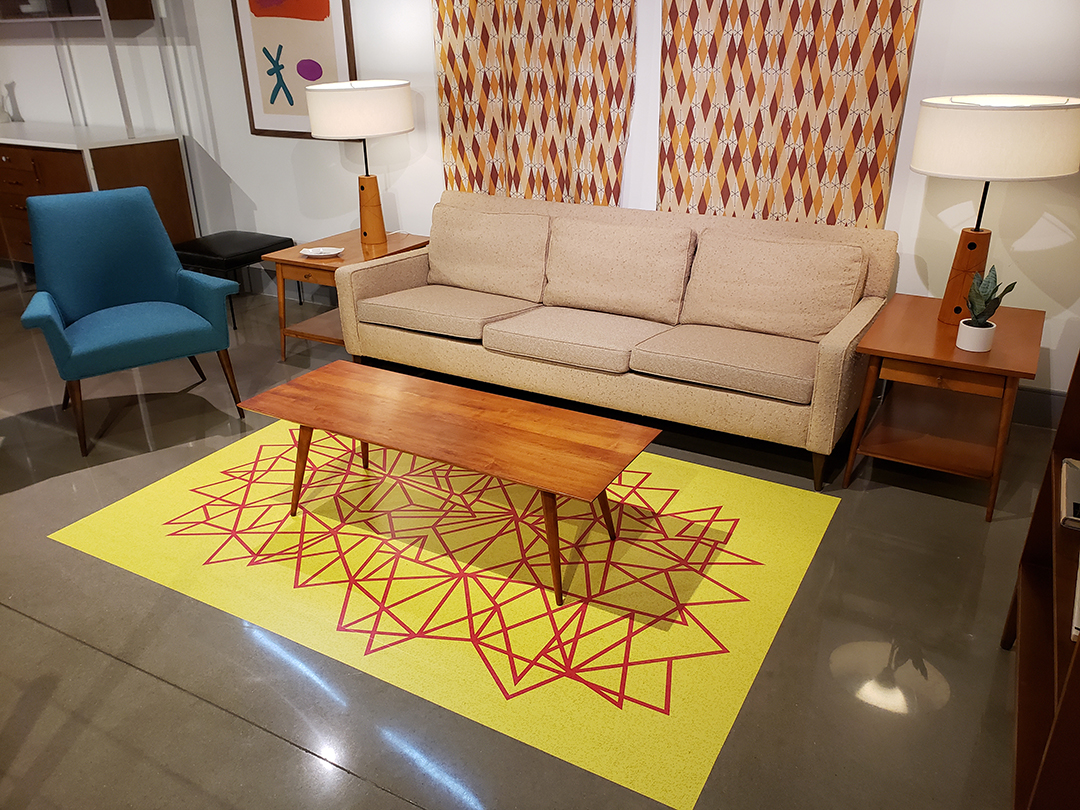 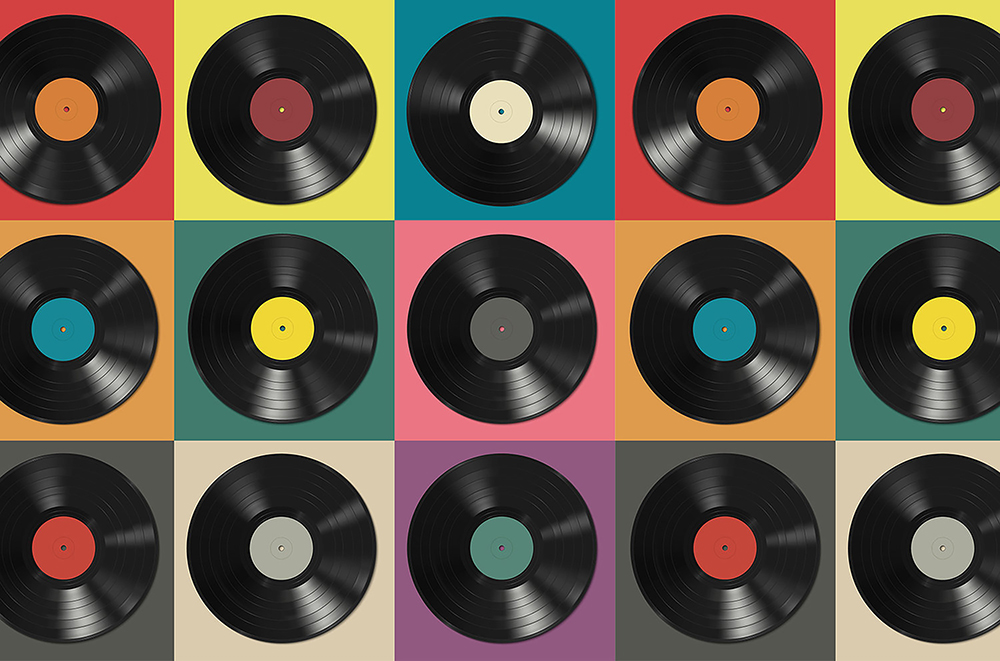