In 1996, when I began researching for my book, “Collecting Quilts,” I quickly realized that research is a must. Would you recognize a Kapa, Crazy quilt, or a Trapunto quilt if you came across one at a rummage or estate sale? What about an Amish quilt? These are but a few of the many names that describe the techniques used in quilt-making. With prices for some of the more unusual antique and vintage quilts ranging over $1,000, it is worth the time spent to research the many books and museum collections on the subject. Consider the once-humble “Crazy quilt.” For many years examples never made it to major auction houses. Not so today if the designs and materials contain historical or unusual motifs.

Historically, one of the earliest forms of quilting that began in 14th-century Italy found its way to America by the 18th century. This technique was used here from 1800 through the Civil War. Two layers of cloth were stitched together with a design. A signature of a family member made them more important. Popular motifs were flowers and vines; when used with batting stuffing in the largest design, areas it had a “quilted” look. Popular motifs were flowers and vines. 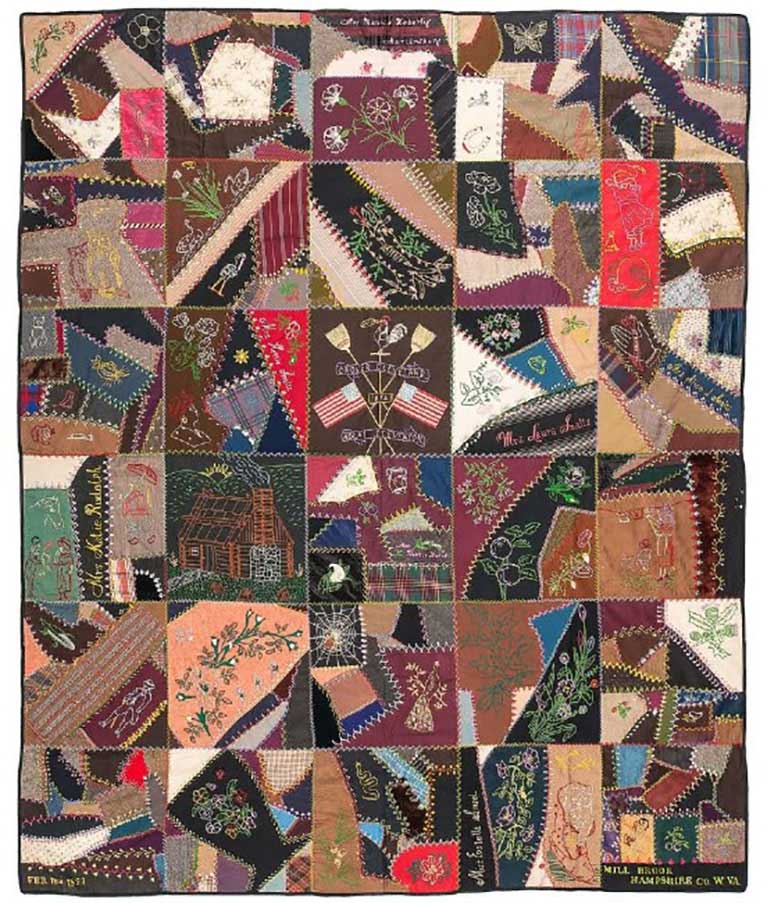 Album quilts are among the most expensive and rare. The name “album” was taken from the then-popular hobby of putting mementos into scrapbooks. The album quilt used the same idea as cloth squares. Each of the squares had a central motif such as an animal or flowering tree. Other objects for the squares used identifiable buildings, religious motifs, and overall geometric forms. What also makes them so special is the intricate piecing and appliqué work. For album bridal quilts, the stitches were almost invisible. Each square was supposedly made by a different friend of the bride and autographed by the maker in India ink.

Crazy quilts are a good example of unusual quilt names. They were based on the fact that they originally had no fixed design when first made in the American Colonies. As cloth became more available in the Colonies, the Crazy quilt became a thing of the past. In the 1870s, when the Crazy quilt technique was revived, it was totally different and used such fabrics as velvet, cotton, wool, and silk as well as plush, satin and linen. The name was also changed to “Crazy Patch Quilt.” Each colorful block was hand-sewn onto a backing of coarsely woven material. Once sewn together, they were connected by fancy stitches in variously colored threads. Advertisements or pictures printed on satin and woven silk political badges were made, as well as embroidered flowers, insects, and names.

Amish quilts are defined by their use of large geometric designs and dark backgrounds, as are Mennonite quilts. Printed fabrics were rarely used. Amish crib quilts can be expensive not only because not many were made, but few have survived.

Log Cabin quilts are easily recognized since part of their designs always resembles the logs once stacked in pioneer homes. As such, they are symbolic of the actual log cabins. The center square is usually red, representing the placement of a fireplace or hearth. They were popular in the late 19th century.

Show quilts can also be Crazy or Log Cabin quilts. They were made in those styles, but strictly for display and of silk. Popular patterns such as the “Star of Bethlehem” was created as silk show quilts.

Hawaiian (Kapa) quilts are a spinoff from missionaries’ patchwork quilts. They were made of two whole pieces of material and appliquéd in a free-style island motif, usually a single color on white. Pattern designs included breadfruit, turtles, ferns, crescent moon, and baskets of flowers.

Patriotic or Freedom quilts always surfaced in times of war or surrounding some historical such as the 1876 Centennial. They used such symbols as the Stars and Stripes, American heroes, and statesmen. The most popular symbol was the American bald eagle.

Many quilters commemorating the 1976 Bicentennial use the eagle as their primary motif. They are popular with contemporary collectors.

May 2022 ANTIQUE DETECTIVE Mustache sentiment cups make trendy bargains by Anne Gilbert Take a look -- Mustaches and beards are seen everywhere! It couldn’t be a better time to give a second glance to gifting or collecting antique and vintage mustache sentiment cups....

END_OF_DOCUMENT_TOKEN_TO_BE_REPLACED

April 2022 ANTIQUE DETECTIVE The history of animal cracker containers and other tins by Anne Gilbert   Chances are that you or someone in your family have eaten animal crackers and loved every bite. Perhaps you are even a collector of the tin boxes they came in....

END_OF_DOCUMENT_TOKEN_TO_BE_REPLACED

March 2022ANTIQUE DETECTIVECollectible old pewter came in many formsby Anne Gilbert  You might be surprised to learn that many items of 17th and 18th centuries still come up for sale at modest prices. Also, there are many collectors around the world, including...

END_OF_DOCUMENT_TOKEN_TO_BE_REPLACED

February 2022ANTIQUE DETECTIVETrendy autograph collecting needs careful researchby Anne Gilbert  While many once- popular collectibles are languishing, nothing seems to stop autograph collectors from spending big bucks. The question is, are their purchases...

END_OF_DOCUMENT_TOKEN_TO_BE_REPLACED

December 2021ANTIQUE DETECTIVEOld laundry items are popular collectiblesby Anne Gilbert  Would you pay $149 for a wood-and-glass washboard made in the 1940s? How about a 1920s old clothes wringer priced at $114? Such items are finding their way into restaurants...