Paintings and prints of family ancestors, whether they are American, Chinese, English, or from another country, continue to be popular collectibles. They can be formal or folk-art style, done in oil, watercolor, or pastels. Prints are also currently popular at bargain prices. Price can be determined if they are signed, unsigned, or attributed to the artist.

The portraits done by American itinerant artists, known as “folk artists” or “naive” painters, can also be priced for thousands of dollars. They worked usually in the Northeast, moving from place to place. Many began their livelihood painting furniture and signs.
Folk art painters of the 18th and early 19th centuries created their own stylistic techniques that help identify many of their unsigned pieces.

Johnson is one of the few documented African-American portrait folk artists in the late 18th to early 19th centuries. After he received his freedom, he was listed as a portrait painter or limner in Baltimore city directories beginning in 1796. Remaining examples are of white people. His painting of “The Westwood Children” is part of the National Gallery collection. Eighty-three of his paintings are recorded.

While many American women did folk art paintings at that time, their subjects were usually family and friends. They are mostly undocumented. An exception is Mary B. Tucker (1824-1898). She began doing watercolor profile portraits at age 16. 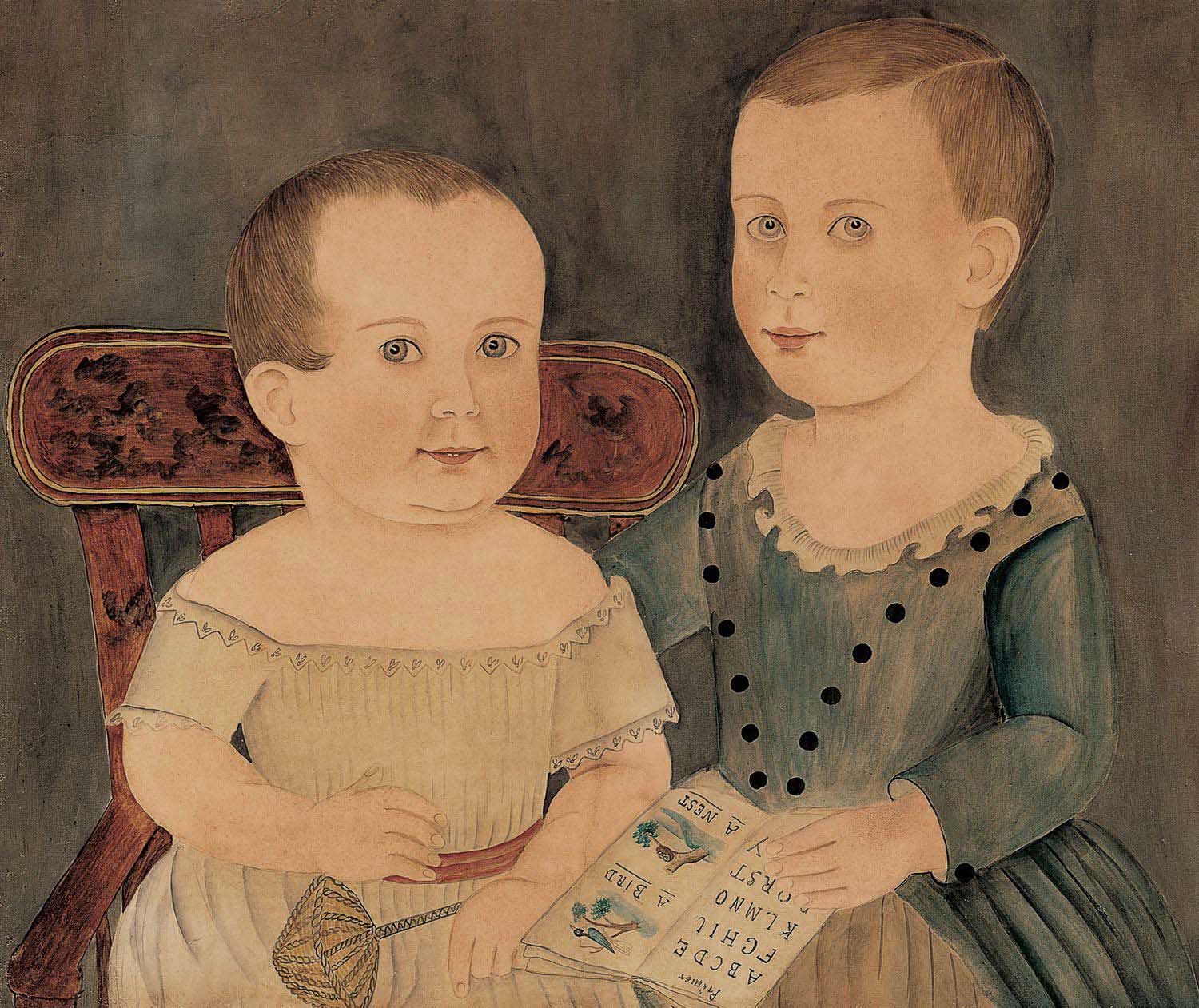 Learning the ABCs, graphite, and watercolour

One major difference in formal and folk portraits is the concentration on faces. Bodies, arms, and hands seem misshapen in the folk portraits. Backgrounds for the most part were draperies, solid colors, or window-framed landscapes.  The portraits created in the naïve style were a status symbol even in the 18th and early 19th centuries when done for the upper and merchant American classes. During the 1876 Philadelphia Centennial, thousands of “Colonial ancestor portraits” were created in oil and watercolors. Fast forward to the 1976 Bicentennial, when once again folk art portraits became popular and collectible. The result was a lot of faking as well as “fixing.” Many fakes were made and sold as “in the manner of” or attributed to William Matthew Prior. Age cracks were painted on in a dark color with a fine brush. A new product even came out that added a crackled look.

Sometimes signatures were added to an old painting. Warts and crossed eyes were removed. Charming pets such as dogs and were added to increase the value. They still are being passed off as authentic. Get a certificate of authenticity before paying big bucks.
Prints of the most popular folk art portraits are bargain-priced — some as low as $25.

Artists are still working in the folk art style if you would like family portraits done in that style.