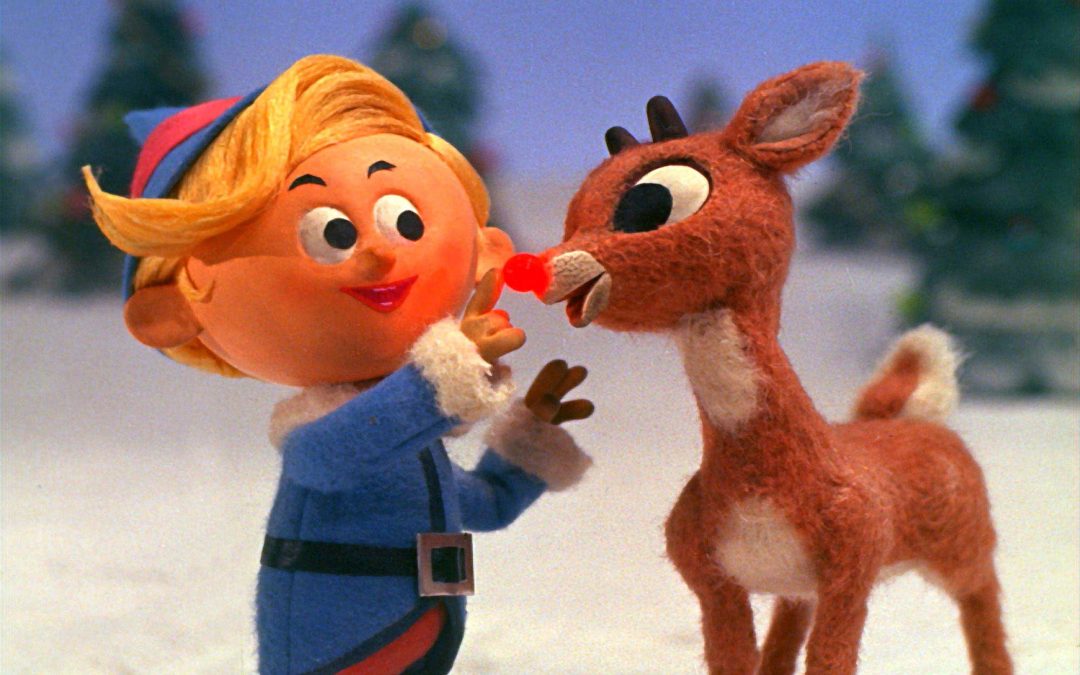 The holiday season is a time for nostalgia, savoring warm memories created with friends and family – and often, red-nosed reindeer, abominable snowmen, and an elf here or there.

Christmas TV specials are as old as the medium of TV itself, and everyone has his or her favorite.

Many of the specials that Baby Boomers and older members of Generation X will remember from their childhood were produced by Rankin/Bass Animated Entertainment, who cornered the market in stop motion animation. Think Rudolph the Red-Nosed Reindeer, Frosty the Snowman, The Year Without a Santa Claus – well, you get the idea. In stop motion animation, inanimate objects are moved slightly between photographed frames in order to give the object an appearance of motion. Rankin/Bass TV specials gave us some of our most beloved Christmas characters come to life, all thanks to this effect, which the company called, “Animagic.”

Rudolph the Red-Nosed Reindeer is among the earliest televised Christmas specials, having been telecast every year since 1964. Telling the well-known story of Rudolph’s embracing of his glowing red nose after being labeled an outcast by his peers, Rudolph was voiced by Canadian voice actress Billie Mae Richards, while American musician and actor Burl Ives lent his voice to the narrator of the special (the doll crafted for the character was made specifically to resemble Ives).

While Rudolph’s story had a happy ending, most of the original puppets used in the 1964 production did not. Most of the original puppets were not properly stored and deteriorated as the years passed; of the surviving puppets, two – one Rudolph and one Santa – were taken onto the TV program Antiques Roadshow and were appraised at a value of between $8,000 and $10,000. According to the Associated Press, in 2020, the pieces sold at auction for $368,000, and later donated to the Center for Puppetry Arts in Atlanta.

Cementing its place in pop culture history, in 2014, the U.S. Postal Service commissioned a postage stamp of Rudolph. 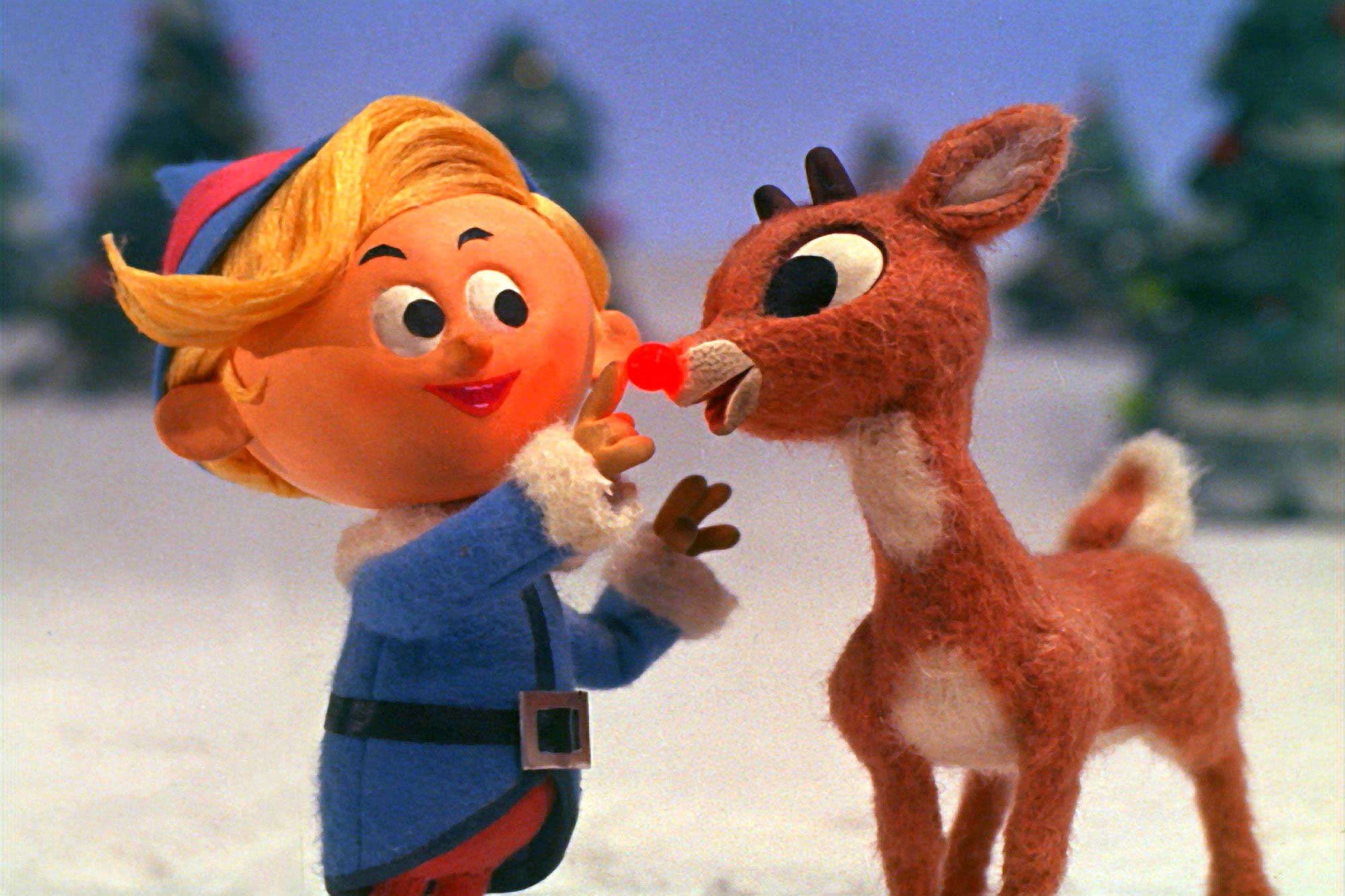 When the special finally aired in 1964, it became such a hit that it has been rebroadcast every year since, making it the longest-running Christmas special in history. courtesy of Wikipedia

Commissioned and sponsored by the Coca-Cola Co., A Charlie Brown Christmas was special for many reasons – chief among them, it was the first Peanuts TV special to feature Charles M. Schulz’s beloved characters, who had delighted readers on the comics page of their local newspaper since 1950.

The TV special was also unique in that non-actor children voiced Charlie Brown, Linus, Lucy and their pals, with the youngest, only 6 years old and unable to read, having to been fed her lines one sentence at a time (shockingly enough, the voice recordings were completed in just one day). A California-based children’s choir lent their voices to “Christmas Time is Here” and “Hark! The Herald Angels Sing” at the beginning and end of the program, respectively.

The program’s jazz soundtrack, composed by Vince Guaraldi, has sold millions of copies worldwide. A Charlie Brown Christmas has since become synonymous with appreciating one’s blessings during an increasingly commercialized holiday season, with no better symbol than the small sapling tree he finds in a Christmas tree lot.

Against the expectations of the show’s producers, the program was an instant hit, airing on CBS on Dec. 9, 1965, to an estimated 14.5 million viewers. The next year, it would win an Emmy Award for Outstanding Children’s Program.

“A Charlie Brown Christmas” has remained one of the most popular family programs of the holiday season for more than 50 years; one of the animators, said it was the best special he’ll ever make – This show is going to run for a hundred years,” marveled Ed Levitt upon its release and glowing reception. In 2012, the program was added to the Library of Congress’ National Recording Registry in 2012 as a “culturally, historically”: important sound recording. 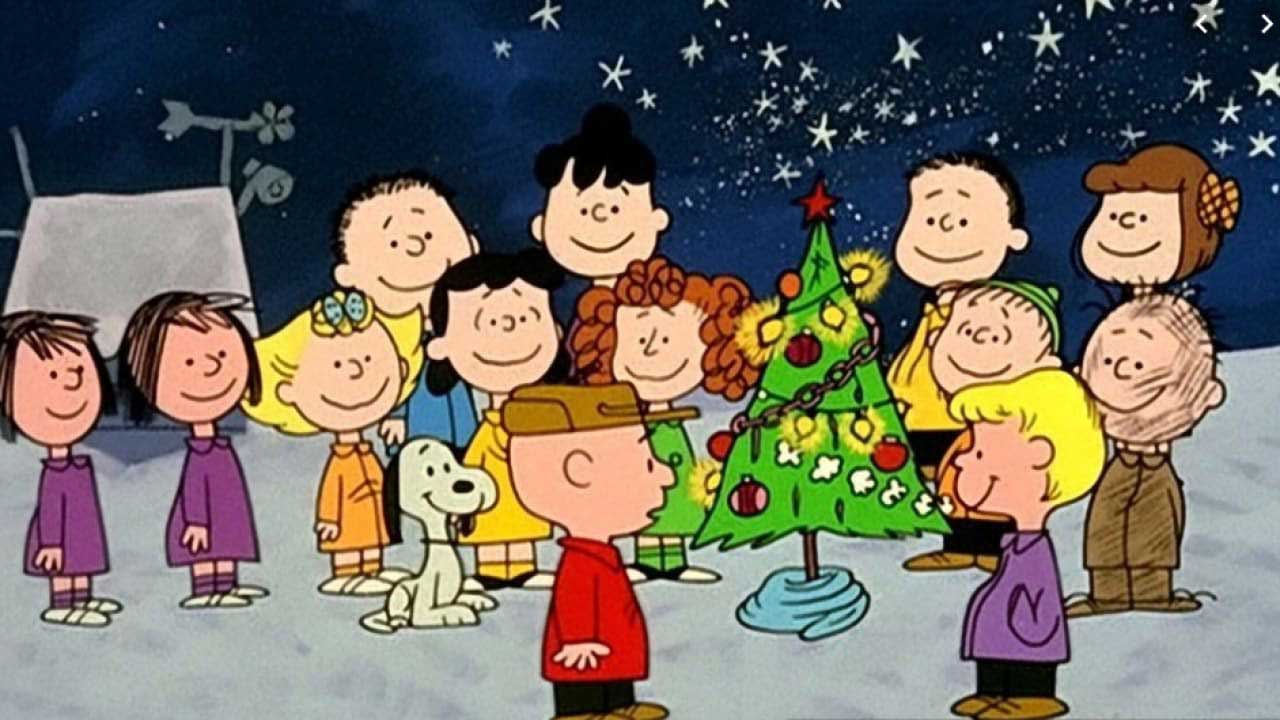 In A Charlie Brown Christmas, the program’s title character learns the true meaning of Christmas.
(Image courtesy of Getty Images) 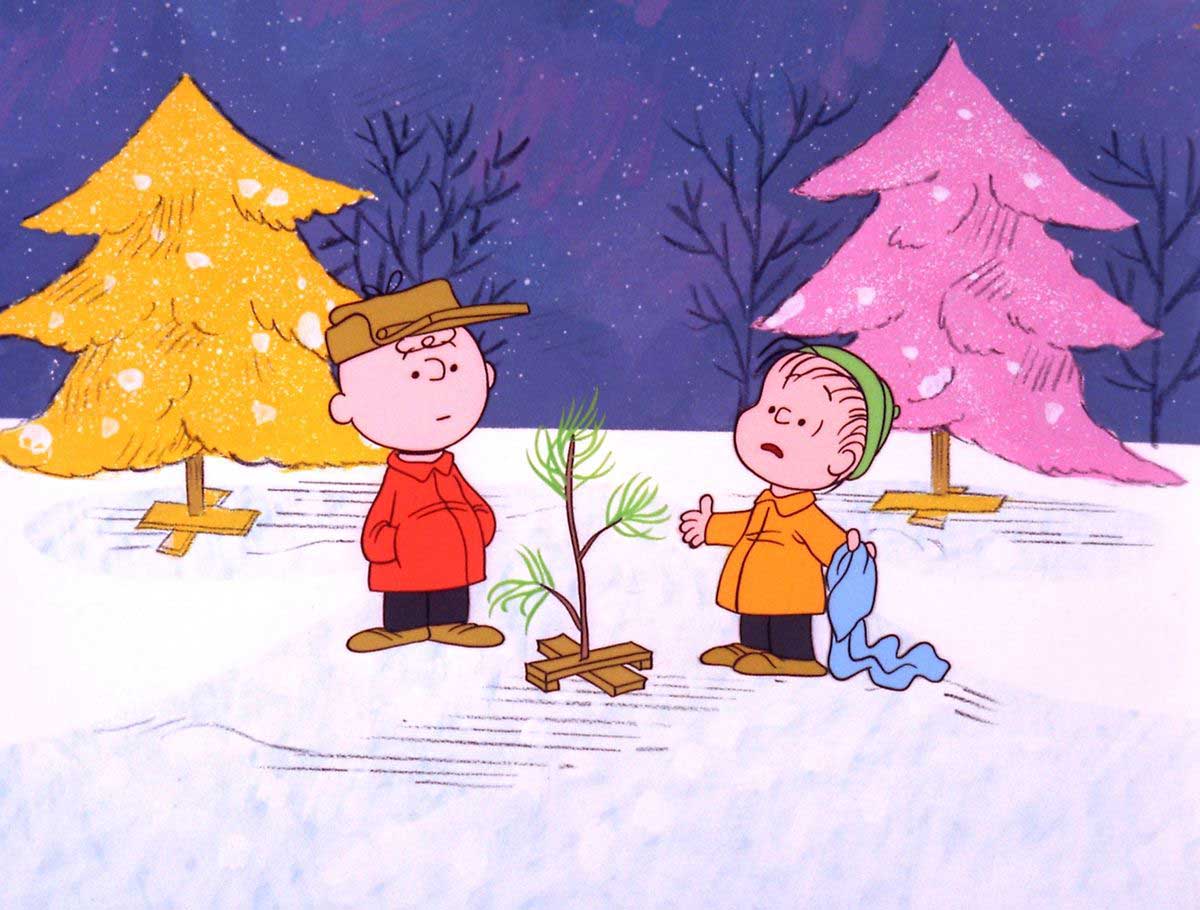 Unlike his friends, Charlie Brown sees big potential in a small Christmas tree. The tree portrayed in A Charlie Brown Christmas
has been sold as a novelty decoration. (Image courtesy of Getty Images)

How the Grinch Stole Christmas (1966)

For the animated special, according to Toonopedia, animators spent more than a year penning thousands of cells, background drawings, and character drawings. Jones himself said he animated the diminutive, soft-spoken Cindy Lou Who (voiced by June Foray, best known as the voice of Rocky the squirrel in Rocky and Bullwinkle) to somewhat resemble the Grinch, while Max, the Grinch’s perpetually suffering canine henchman, was designed with Porky Pig’s character in the Duck Dodgers cartoons in mind.

How the Grinch Stole Christmas made its debut on Dec. 18, 1966, amid a spate of other animated holiday specials, following on the heels of other animated Christmas specials released during the mid-1960s (and, not coincidentally, the birth of color television).

Continuing the tradition of the inclusion of employing big names with big voices, Boris Karloff headlined the small list of voice actors, with Karloff pulling double duty as both the Grinch and the Narrator. Audiences from the previous generation would remember Karloff in his iconic role as Frankenstein’s Monster in the 1931 horror classic Frankenstein. Many viewers mistakenly believe that Karloff also sang the special’s “You’re a Mean One, Mister Grinch,” but that designation goes to vocalist Thurl Ravenscroft. If Ravenscroft’s deep bass voice sounds familiar, that’s because audiences knew him as the voice of Tony the Tiger for Kellogg’s Frosted Flakes cereal. Ravenscroft voiced Tony for an entire five decades. 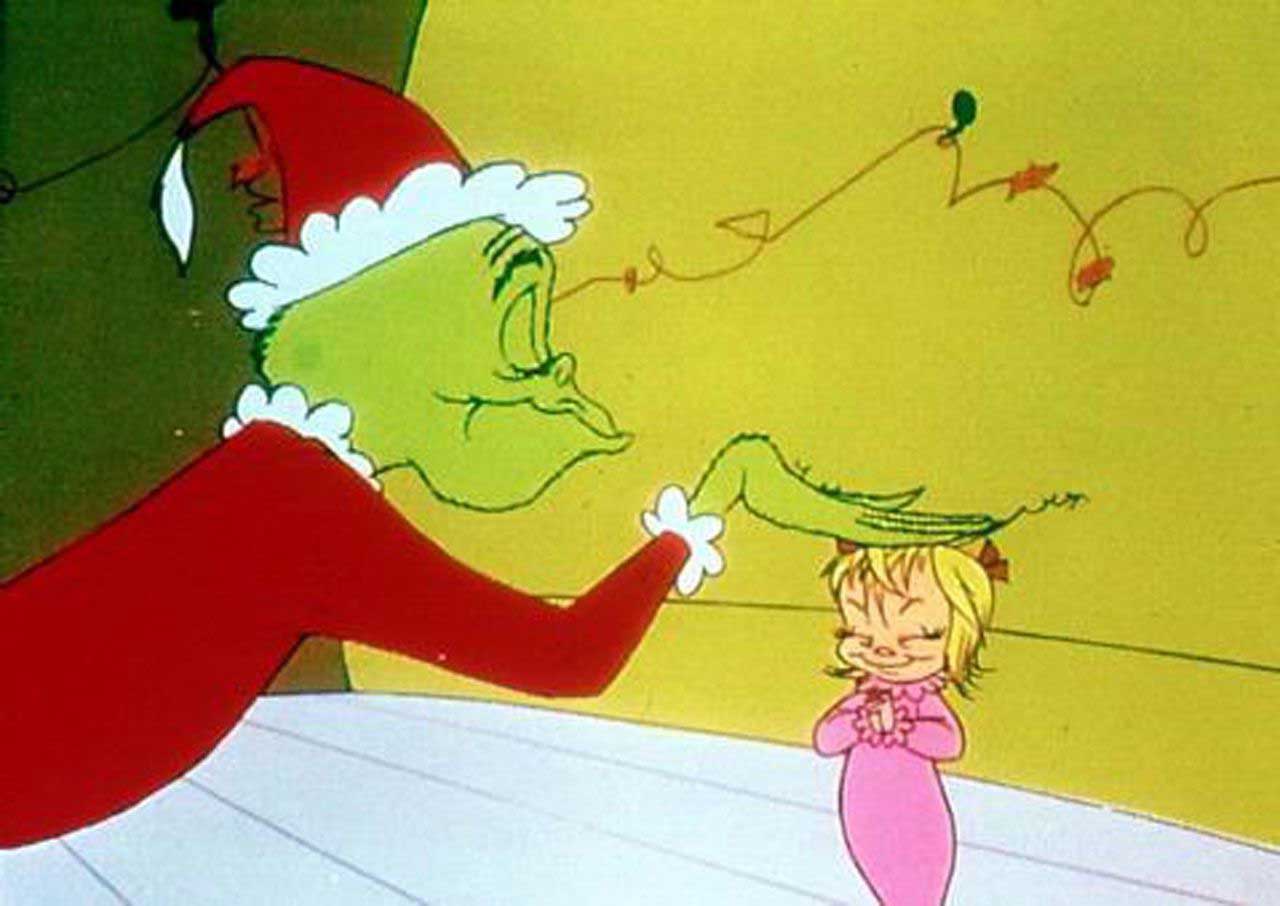 Grinch and Cindy Lou Who

He’s a mean one, and the Grinch may have fooled darling little Cindy Lou Who…. 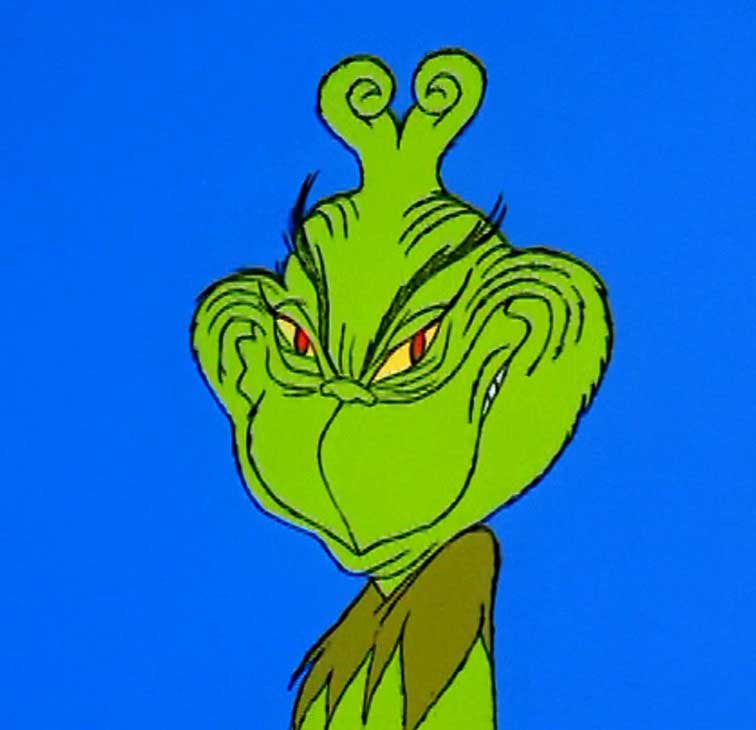 ….but he doesn’t fool the viewer. (Images courtesy of Warner Bros.) 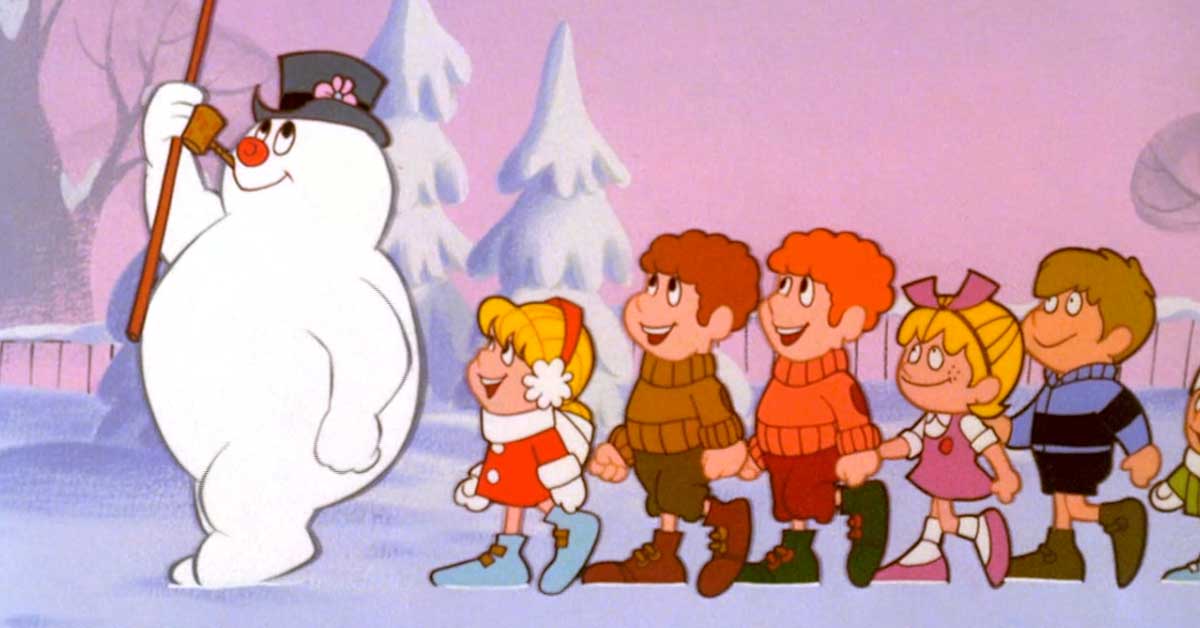 Coming off the success of Rudolph the Red-Nosed Reindeer, Frosty the Snowman led the way for Christmas TV programming
in 1969. (Image courtesy of Rankin/Bass)

Another Rankin/Bass production, Frosty again told the story of a beloved character made popular in a Christmas song, and, like Rudolph before it, employed the voice of another famous actor, Jimmy Durante, as the narrator of the story. June Foray, best known as the voice of Rocky the squirrel in Rocky and Bullwinkle, voiced the human protagonist and Frosty’s companion, Karen. Unlike Rudolph, Frosty was done in traditional, 2D animation.

Durante was no stranger to the Frosty mythos, having recorded the song in 1950. The animated tale about the snowman come to life was an instant hit, giving rise to multiple sequels, including Frosty’s Winter Wonderland (1976), Rudolph and Frosty’s Christmas in July (1979), Frosty Returns (1992), and the straight-to-video The Legend of Frosty the Snowman (2005). 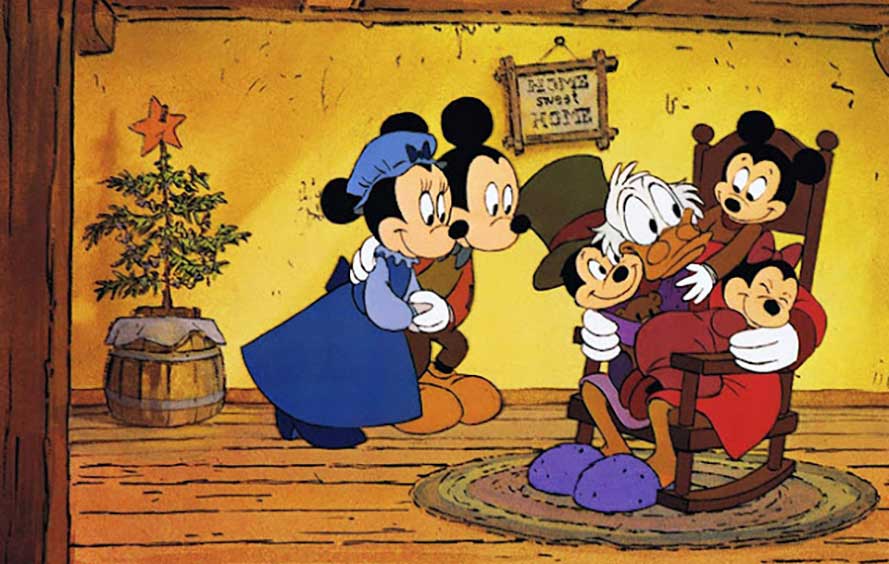 Like the Dickens original story, Mickey’s Christmas Carol redeems Scrooge at the end – a Christmas
miracle. (Image courtesy of CBS)

Those younger Generation Xers likely will recall one of Disney’s best-loved contributions to the animated half-hourlong Christmas specials, Mickey’s Christmas Carol, an adaptation of the classic Charles Dickens tale as told by Mickey Mouse and pals. With Mickey Mouse as Bob Cratchit, Scrooge McDuck appropriately enough, as Ebenezer Scrooge; and Goofy as Jacob Marley, the special was the first original Mickey Mouse theatrical cartoon in three decades (Mickey hadn’t been featured on the silver screen in an original production since 1953). The only original voice actor in the film was Clarence Nash, who lent his voice to Fred (Scrooge’s nephew), portrayed by Donald Duck.

Mickey’s Christmas Carol received mostly positive reviews upon its release on Dec. 16, 1983, showing in theaters directly before a re-release of the full-length 1977 Disney animated film The Rescuers. Those naysayers who gave the program negative reviews were soon put to rest, however, when it was nominated for an Academy Award for Best Animated Short Film the following year.

Although your family likely had one or perhaps all of these Christmas specials in your home video library, they can also be viewed on most streaming services as well. So pop some popcorn and get your TV ready for a journey back to the Christmases of your childhood.