“Seven Stars is a romantic-sounding name, but the quilt really deserves this lofty title. It’s a beauty,” Ruby McKim wrote in “101 Patchwork Patterns” in 1931. Start with a star and you cannot go wrong. Add six more and you have the recipe for the classic Southern pattern: Seven Sisters. In line with this year’s goal to learn something new and challenge yourself, this is the perfect design for you to try.

It is an intricate and visually engaging block composed of seven stars grouped in a staggered set to create a hexagon or a circle design. It is generally made with seven diamond stars pieced into a hexagon shape with diamonds or hexagons between the stars. A rarer group has seven diamond stars or sometimes flower shapes that are pieced into circles and then usually set into square blocks. With myriad ways to construct the blocks, set them, and then color them, “Seven Stars” may really refer to the infinite number of versions one can create of this versatile block.

The pattern has a rich and intriguing history. The stories span centuries from starry night skies full of mythical Greek goddesses, and tales of Confederate star flags, to the simply descriptive since the block, is composed of seven stars. Mystery surrounds the pattern’s origins and the meanings behind the names.

Heavenly Inspiration. The Mississippi Quilt Project documented a “fondness for the star pattern known as ‘Seven Sisters,’ a name taken from the cluster of stars in the constellation of Taurus with the astronomical name of ‘the Pleiades.’ Some oldtimers thought you could predict the weather according to the number of ‘sisters’ you could see on any given night, and that may have contributed to its popularity among Mississippi quilters.” The Greek myth of the seven daughters of the Titan God Atlas, trapped in the heavens, has been around for thousands of years. Seven sisters who have become stars applies equally to both main block names. 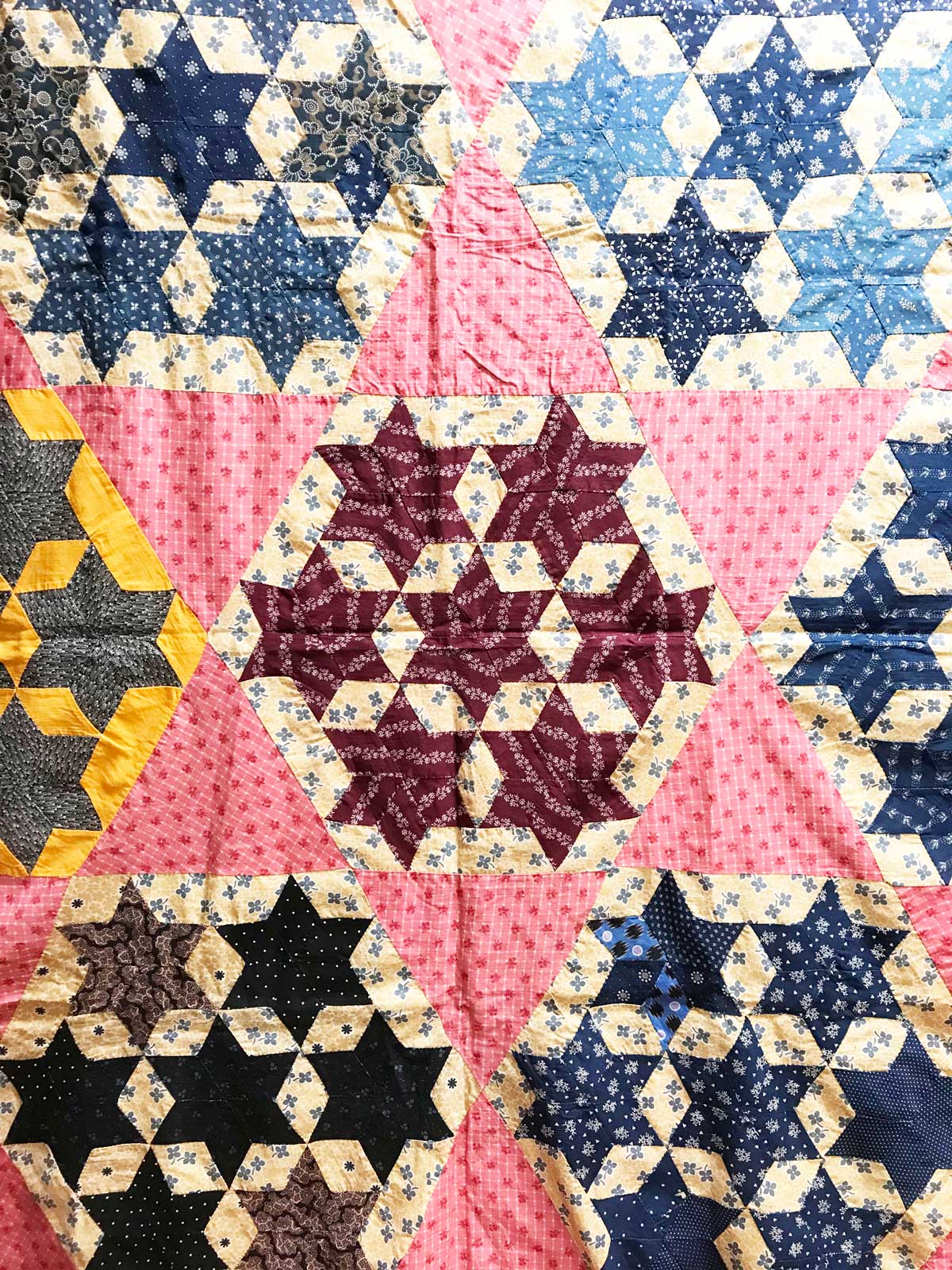 Detail of Seven Sisters quilt top, circa 1900, from the Starley Antique Quilt Collection. (Image courtesy of the author)

Seven Star Confederate flag – A Southern origin for the Seven Stars name is related to the Civil War and the seven stars on the first Confederate flag. The stars represented the first seven states to secede from the Union. There were seven-star flags and other textiles made then, so it is possible some people selected the pattern to reflect their political positions, or to “vote with their needles.” That flag was used for less than three months in 1861, but the powerful symbolism likely inspired quilters to recreate it with this pattern.

While Seven Sisters is the most recognized name, the pattern was originally published as Seven Stars in the 1895 Ladies Art Company catalog.

The descriptive Seven Stars in a Cluster, Capper’s Weekly, 1928 followed as well as Seven Stars, Kansas City Star, 1931. In 1933, the Seven Sister’s name appeared in Nancy Cabot’s column. Other names from this period include Boutonniere, Building Blocks, Star Bouquet, and Rolling Star.

Whatever the name, it is a challenging pattern. Hexagon versions tend to be hand-pieced often with the use of the English paper piecing technique which employs diamond-shaped paper templates. Each star section is created with six diamonds. It is also a great pattern to practice regular hand piecing for the inset seams. Why not try a block for a beautiful little star pillow? A perfect present for your sister or any star in your life.