Though the technology had been around since the 1950s, the ‘Me’ Decade of the 1970s finally saw video game consoles introduced to American households, and Generation X – those born between 1965 and 1980 – had found an addictive new pastime, much to their parents’ chagrin.

The precursors to video games were created in the 1950s by British inventors – the very first game, called OXO, was simply a game of tic-tac-toe, played on an analog computer and oscilloscope screen. Professor A.S. Douglas created the game for his doctoral dissertation at the University of Cambridge.

In the early 1960s, the evolution of video games moved to space as the Cold War’s space race between the U.S. and Russia heated up. Again, an academic made the next great contribution to the relatively new invention – a professor at MIT developed Spacewar, a space-combat game developed for the PDP (Programmed-Data-Processor), a computer used mostly at colleges.

It would be nearly several years later that the smaller, multi-player game consoles that we recognize today hit stores. Technology developer Ralph Baer of Sanders Associates licensed his own version, referred to simply as “the Brown Box” and later as “The Odyssey,” to Magnavox in 1967. Baer is often referred to as “the Father of Video Games,” according to History.com.

The first electronic game company name you’re likely to recognize – Atari – took its inspiration for its classic game Pong (which hit store shelves in 1975) from one of Magnavox’s original 28 games. The electronics giant took Atari to court for copyright infringement. Atari eventually settled out of court, while Magnavox would go on to file many more similar lawsuits over the course of the next two decades.

None of this mattered to video game enthusiasts of the 1970s, however, as Pong became a pop culture icon and the Atari brand enjoyed a great deal of growth throughout the mid- and late 1970s. For older members of Generation X, the Atari consoles would mark their first foray into the escapist world of video games.

“I was born at the perfect time to grow up as games grew up,” writes blogger Carolyn Petit of Game Spot, “and (Atari) is where my love of gaming began.”

At the same time, the industry in general marked many milestones in the invention and release of games and products recognizable even to younger players today. Those include the release of Space Invaders, Donkey Kong (released by Nintendo), and the U.S. release of the popular Japanese game Pac-Man.

The oversaturation of video games led to a major North American market crash in the early; 1980s, leading to several video game companies filing for bankruptcy. The crash lasted only until 1985, when Japan’s Nintendo Entertain-ment System (NES) came to the U.S., offering improved sound, colors and graphics.

The original NES console was an immediate hit and remains so, Petit writes.

“Even those who aren’t old enough to remember these games from their heyday understand what Nintendo is, since it’s a force that has continued to loom large in gaming in the decades since,” she writes. 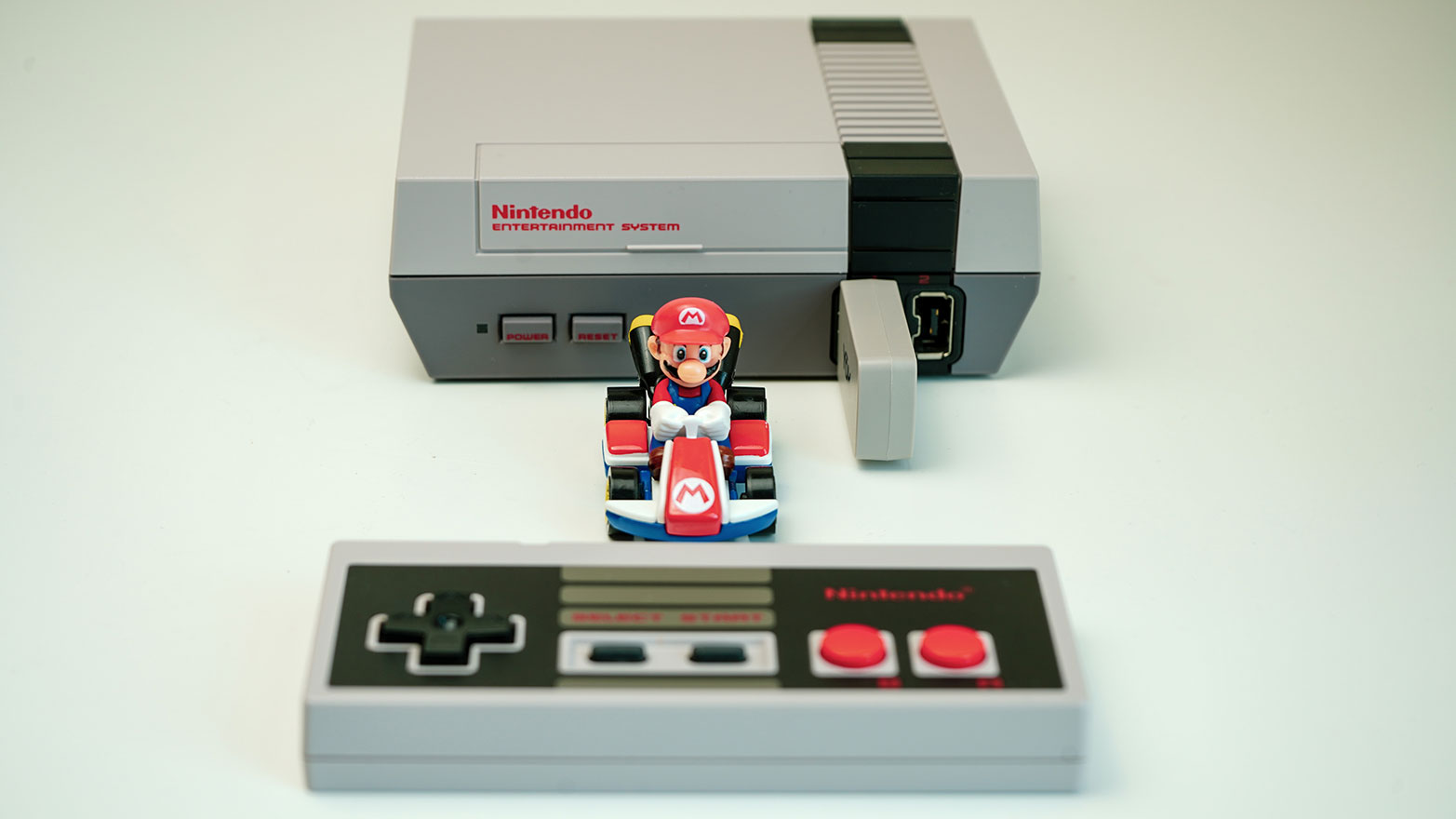 The game Super Mario Bros. became synonymous with the original Nintendo Entertainment System in the 1980s. (Image courtesy of Legends of Localization)

Nintendo’s continued power to create feelings of longing and nostalgia in Generation Xers remains strong to this day, she adds.

“Talk to people about games like Super Mario Bros., The Legend of Zelda, and Metroid, and they still light up with excitement, appreciating the tremendous importance of these games in the grand scheme of gaming’s evolution as a medium,” Petit says.

Nintendo followed its original console up with the first hand-held console, the Game Boy, in 1989.

The decade of the ‘80s ended as a “console war” between Nintendo and newcomer Sega, which released the Genesis in 1989n as a response to Nintendo’s NES. Nintendo responded in 1991 by releasing its Super Nintendo NES, and with it, improved graphics, sound and richer games. In general.

Concerns over the ever-increasing violence in video games reached a fevered pitch in the 1990s, with an eventual organization called the Entertainment Software Rating Board being convened to rate the violence and adult situations in video games so parents could make a better-educated decision when purchasing games for their children. Even those in the political realm joined in the fight against video-game violence, with Second Lady Tipper Gore, wife of Bill Clinton’s Vice President Al Gore, leading the very public charge for a rating system.

As the new century approached, games on CD instead of cartridge were released, and video game consumers demanded better bang for their buck, Sega raced to best entertainment giant Sony as it sought to break out into the market.

Giant strides in computer technology made these more aggressive moves. Eventually, Sony’s Playstation would win the format war, with a price tag of $100 less than Sega’s Saturn console, which was released that same year. In response, Nintendo released its 64-bit system, Nintendo 64.

Fast forward to today, and the Playstation and its many iterations remain the gold standard in the video game industry. However, those who were there in gaming’s early days know that for them, there is no time like the past.
“Playing retro games,” Chris Schranck, a 33-year-old gamer who grew up playing Super Mario Bros. in Missouri, tells Wired, “you’re happy to be feeling like a kid again. As an adult, you have all these responsibilities and anxieties, and if you can just find a way to forget about that, even just for 15 minutes, it can help. I think if you can find something, anything, that can help you feel good, that’s a good thing. Retro games evoke these happy memories. Being a kid, opening up that new game or console on Christmas. How it looks, the beautiful pixel art. It’s the nostalgia, and remembering being young again.”