It’s fall, so I would like to start with story that has been making the “haunted” or “cursed” circuit for many years: The curse of “The Crying Boy.”

In September 1985, a British tabloid carried the headline, “Blazing Curse of the Crying Boy.” The story published under this headline was the tale of a distraught South Yorkshire family whose home of 27 years had been gutted by a mysterious fire.
Bizarrely, the victims were blaming the incident on a ‘cursed’ painting of a crying boy. The brother of the homeowner, a firefighter, claimed this wasn’t the first time this had occurred. He said he had witnessed many fires in which everything was ruined except for the Crying Boy painting. The response to the article was insane. Within a day, hundreds of readers reached out to the newspaper claiming to be cursed by the painting.

The alleged mysterious fire was caused by the family’s son, who was frying french fries in a skillet on the stove and the grease caught fire.

The odd part of this story is that the house was completely destroyed with the exception of the print of the crying boy. This was something the local firemen had witnessed before. The brother of the homeowner had told the family to remove the print when he first saw it hanging in the house; sadly, they did not heed his advice. 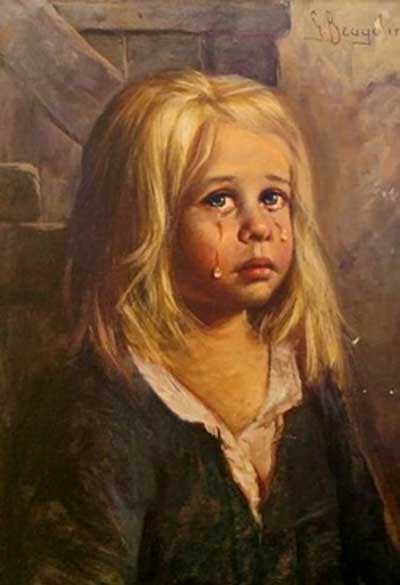 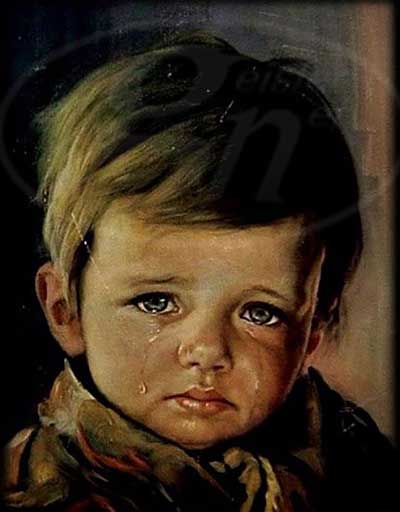 A Crying Boy painting by Italian artist Giovanni Bragolini (1911-1981), one in a series of paintings meant to pay tribute to the orphans of World War II in the UK. (photo courtesy of the author)

To squash the “curse,” the tabloid told everyone to mail their prints to the paper and they would destroy them. On Oct. 31, 1985, the UK saw a massive bonfire of crying boy and girl prints. Yes, they all burned, even though it took three attempts to do so.
Over the decades, the story has come to the forefront fueled by a YouTube video or ghost hunting TV show. What I find interesting is the artist. It all began in the 1950s. A Spanish artist named Giovanni Bragolini (1911-1981) made a series of paintings that depicted a young child crying. He sold those paintings to tourists as a reminder of the orphans of World War II. Oddly enough, people in England, especially young couples, grew fond of these paintings. Mass prints of the paintings were sold across the country. It is estimated that 50,000 were sold just in the UK.

It turns out that Giovanni Bragolin was a pseudonym used by Spanish painter Bruno Amadio, who was also known as Franchot Serville. The artist died in 1981, and no one has been able to trace him to verify his story. The prints are often signed G. Bragolin and nothing is known about the original paintings from which the prints were made. Scary stuff here kids. During the same time, several artists were painting similar crying child works and the same “curse” seems to apply to those as well.

I have owned and sold a number of these precious crying children and am very happy to report, knock on wood, that the only fire my home has been involved in was the direct result of me walking away from a burning candle sitting on a desk covered in paperwork and a small fan running in the background. There were no crying children prints in the house at the time.
I own several “haunted” items from my huge antique shop, so if you have a crying child print that you want to get rid of, I will gladly take it off of your hands.

All prices given are for sale in a private sale, antique shop or other resale outlet. Price is also dependent upon the geographic area in which you are selling. Auction value, selling to a dealer or pawn shop prices are about ½ or less of resale value.