Q: I purchased this pair of heavy metal male and female heads at a local thrift store and would like to know about them and how much they might sell for. They are each about 6 inches tall and are extremely detailed. Thank you so much.

A: These are amazing! They are referred to as Benin Bronzes. The Benin Bronzes come from Benin City, the historic capital of the Kingdom of Benin, a major city state in West Africa. Benin City became part of the British Empire from 1897 to 1960 and is now located within the Federal Republic of Nigeria.

The modern city of Benin (in the Edo State) is the home of the current ruler of the Kingdom of Benin, Ewuare II, was crowned the Oba (king), of Benin in 2016. The role of the Oba is more ceremonial than political. The Edo State is one of the 36 states in Nigeria.
The Benin Kingdom was active between the 11th century AD and 1897. The Benin bronze casters started crafting bronze figures and plaques before the 13th century. The bronze works are known collectively as Benin art and are an extraordinary example of African art. The busts were made to honor kings and queens both past and present, dignitaries, and other people of importance. They traded with the Portuguese for copper and bronze and in return crafted bronze works that represented Portuguese life and lifestyle.

The Kingdom of Benin was doing quite well toward the end of the 19th century. They had managed to remain an independent kingdom while other areas were taken over by Britain. Britain was in a constant battle to control this area of Africa. Benin and surrounding areas also had a wealth of natural resources that appealed not only to Africa but also Britain. In February 1897 the Kingdom of Benin was invaded by British forces, warships from several areas and Britain, forces came at the Kingdom of Benin from every direction. This aggressive action is called the “Benin Punitive Expedition,” but it was a massacre with an unknown death toll.
The chaotic theft of royal and sacred artworks and other items by perhaps up to two hundred soldiers, sailors and administrators during the sacking of Benin City in the British naval expedition of 1897 is one of the most well-known examples of the widespread practice of military looting by European troops in the later 19th and early 20th centuries.

Through the Benin punitive expedition of 1897, the first bronze works from Africa were recorded. High-ranking British military also looted religious and important works obtained through this takeover. A British Museum is the current custodian of most of the looted art and bronzes. In the 1960s quite a few pieces that had been in private collections were auctioned off. Some of the pieces were sold to private collectors and others to museums around the world. Slowly the British Museum is collecting these looted items and has plans to return most to Nigeria.

Currently there are 160 different museums and institutions in possession of looted Benin Bronzes and to date only a few have plans on returning them. Germany is not only going to return everything that they have but are going to build a museum in which to house them. Most U.S. museums are returning looted items, including the Smithsonian. 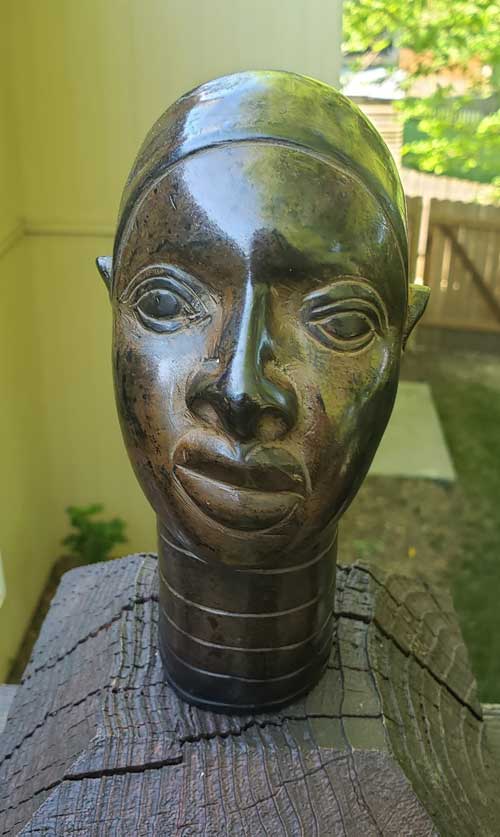 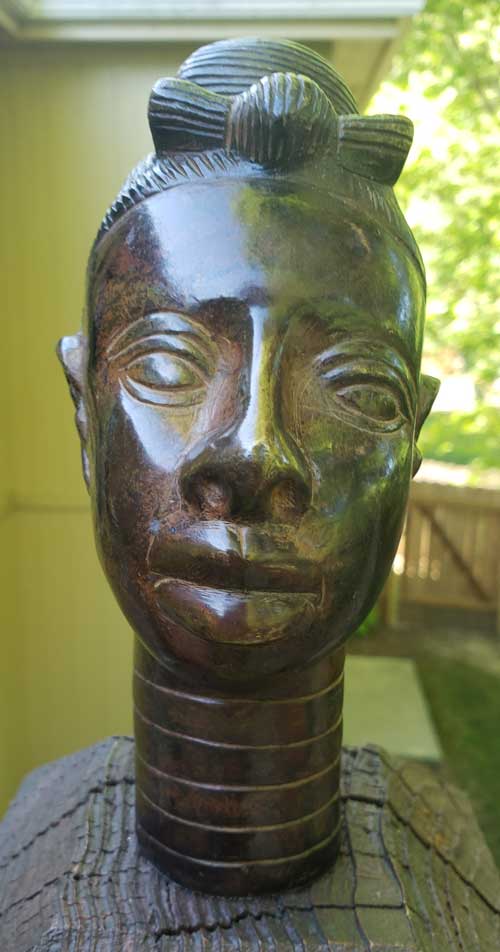 Owning and/or selling looted items including Native American items removed from sacred sites and graves is illegal. After I finished this appraisal I looked at Benin Bronzes on eBay and found quite a few that appeared to be old. I emailed the links to the British Museum and a few days later received a response that they had found several bronzes, one of great importance, from the looted stockpile. Please, if you own an item that you believe to be was obtained illegally or otherwise do your research. Such items need to be returned and conserved.

The Nigerian government has been in communication with the British Museum demanding that all acquired and looted relics be returned to them, these talks began in 2021. It will be interesting to see how this plays out.

On to your pair of busts. The original Benin Bronze busts are much taller starting at about 13” with some being 20+” tall. Benin Bronzes were constructed using the lost wax technique which is extremely time consuming and they did not leave any traces of a mold seam. On your pieces I can see the interior mold seam clearly and an effort was made to cover the exterior mold seam but it is still somewhat visible if you know what to look for. One final thing that I noticed is the thickness of the bust looking at the bottom, the originals are fairly thin and yours are quite a bit thicker.

Reproduction Benin Bronzes of kings and queens started being made again in the 1960s and the latest date that I could find was the 1980s. They still use the lost wax process but the heads are shorter and look to meet the criteria of the two that you have. These were/are sold in art galleries, a select few museums, in Nigeria and Africa. I feel that your pieces fall into the earlier time period, 1960s to early 1970s. The detailing is amazing as is the patina.

This sent me on an amazing historical quest for knowledge fraught with unnecessary violence and the resilient people of Nigeria. For this I thank you. This is the very reason I love my job.

THE OWNER WANTS TO SELL THE BRONZES. IF YOU ARE INTERESTED PLEASE EMAIL ME AT THE BELOW GMAIL ADDRESS AND I WILL GIVE YOU HER CONTACT INFORMATION.