On Sept. 16, 1934, my mother, Mabel Weyand, and her parents, Charles and Carrie Forrester, boarded a train at Medill, MO, for Chicago to attend the Century of Progress International Exposition, a spectacular fair that had begun the year before. The special round-trip fare, offered by the Santa Fe Railroad, was $5.45 per person

Mabel and her parents needed the low fare, as the Great Depression was in full swing in 1934. The Forresters lived in Kahoka, where Charlie was a rural mail carrier. My parents lived on a farm a few miles to the west, where my dad raised beef cattle along with corn, soybeans and other crops, but money was tight. To stretch their meager resources, my mother had been giving piano lessons to neighboring youngsters, and had recently begun raising chickens for extra “egg money.”

Before she and her parents left for the fair, Mabel wrote in her diary that she had canned many quarts of tomatoes and other vegetables. The well-stocked shelves in their basement would keep them virtually self-sufficient during the winter months ahead.

Besides the reduced train cost, they also would save money on lodgings in Chicago, as they would be staying at the home of one of my mother’s college friends on Wabash Avenue. My mother was familiar with the city, as she had lived there between Chautauqua gigs during the 1920s, working as an usher in a couple of theaters, and clerking in a department store.

The Century of Progress International Exposition commemorated Chicago’s centennial, and was a true World’s Fair, with international exhibits. Its theme was technological innovation, and major corporations exhibited the latest in rail and automotive travel and household conveniences. One of the highlights was the Sky Ride, a bridge that enabled fair-goers to travel from one side of the fair to another. When the exposition ended in November, attendance exceeded 48 million, making it the first World’s Fair to pay for itself. 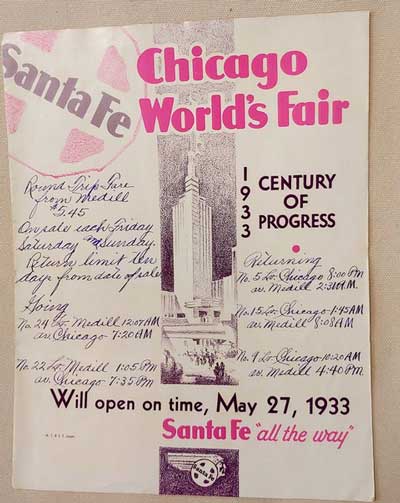 Cover of Santa Fe brochure with special rates and schedules

On the fifth day, Mabel reported they “saw the violin Heifetz took first lesson on in the Hall of States.” She called the Florida Building & Gardens “loveliest of them all.” They ate orange sherbet on a “rainy afternoon,” and visited the Hall of Science “between showers.”

They toured the Travel & Transport Building on the sixth day, and “saw Barney Oldfield on the proving ground,” then saw glass works and a model home. Later, they saw “Firestone Singing Fountains, Hungarian Bazaar,” and topped off the day with a fireworks show in the evening.

Sunday, they attended church at the Hyde Park United Church, and heard “fine music.” After having dinner with their hosts, they went back to the Exposition and saw the “Japanese Building of 1893 Fair restoration,” and ended the day “taking a walk” around their host’s neighborhood.

On the eighth day, Mabel said she “went downtown this morning on the surface car” and went shopping at Sears, Carson Pirie’s and the Davis Store.”
There was more shopping on the ninth day. She went downtown on the streetcar and bought some upholstery fabric at the basement store at Marshall Fields, then had lunch at the Crystal Buffet on the seventh floor. Later, she and her parents visited Lincoln Park.
On Sept. 26, the trio went to the Dearborn Station and boarded the 10:20 a.m. Santa Fe train for their return home, arriving late that afternoon. My dad met them at the station in Medill.
Then it was back to the farm for Mother. Along with regular housework, she resumed canning the bounty of vegetables from their large garden. And I have no doubt her piano pupils would hear many stories about the Century of Progress Exhibition. 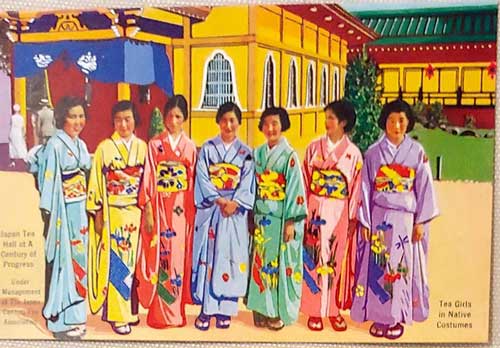 Mabel recorded impressions of the fair in her diary. On the first day, the group got tickets entitling them to see 22 concessions. She reported “enormous crowds (400,000 reported). Can hardly get around. We managed to see Belgian Village, Colonial Village, Swiss Village. Especially enjoyed the latter. We had tarts & coffee there, saw Swiss folk dancing. Took bus to Travel & Transport. Great crowds. Saw Sears bldg., (with) model home.”

The second day, they saw the Ford Building, Symphony Gardens, the Frigidaire Air-Conditioned House, General Motors Building, Chrysler Building & Gardens, Travel & Transport, Aluminum Pullman, Union Pacific Dream Line Train, Model Farm Home, and “Wings of a Century.” (John Ross Reed, who Mabel had traveled with in Chautauqua, directed the last exhibit, but she didn’t get to meet him at the event.) 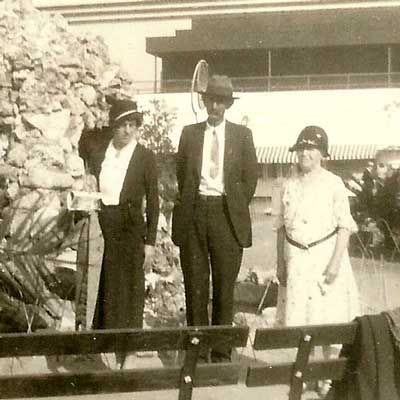 Ken’s mother and her parents at one of the exhibits

On the third day, they saw bread being baked at the Wonder Bakers exhibit in the Agriculture Building and took in the Frank Buck “Jungle Jim” show on the Midway. Then they visited the Dutch Village, followed by the Hall of States, where they saw a “350-pound fruitcake,” and attended a concert by the Mundy Jubilee Singers. They topped off the evening watching a fireworks show from the 12th Street Bridge, and on the way home saw a deep-sea diving demonstration.

The fourth day was highlighted by a visit to the Egyptian Bazaar & Village, and the Mexico Village. Much of their day was spent enjoying the “4 Acre Gardens,” where they ate lunch on the terrace, and “Dad & I took boat ride on the Lagoon.” They ate supper “under the Sky Ride near 23rd Street Bridge, and enjoyed the “lovely Gladiolus Gardens nearby,” and “fancy diving & water circus in Lagoon Theater.” 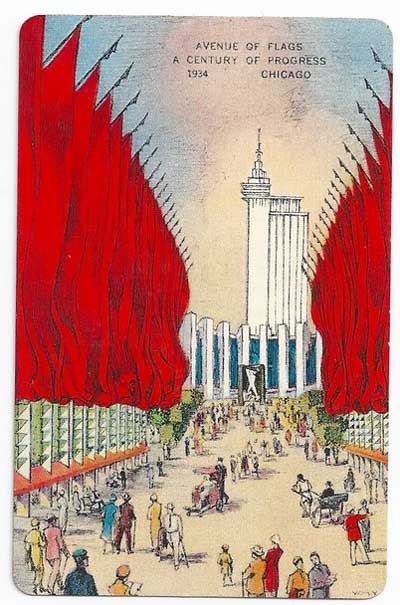 Avenue of Flags (from back of souvenir playing card)