Some vintage items bring back a lot of memories. In 1953, I had the good fortune of traveling in Europe with the director of the Apollo Boys Choir. As a 16-year-old Missouri farm kid, my “travel budget” was tiny, limited to cheap souvenirs and a few postcards I sent to my parents.

Of the “souvenirs,” I was attracted to a pair of terracotta sculptures at a crowded marketplace stall in Naples. A woman was selling a pair of beautifully-detailed, tan-colored figurines for less than $15. One showed an elderly woman with knitting tools. The other was a street musician with a guitar. I had never seen anything like them, and I parted with the last of my pocket money, and crossed my fingers I could get them home safely.

I recall the marketplace seller was a large woman, with masculine and work-worn hands. But she wrapped my treasures carefully in a length of tissue paper until they were shrouded like a cocoon, and stuffed them into a small cardboard box. Later I would pack the box into my small suitcase and hope for the best.

For the next three weeks, as our tour crossed Italy, Switzerland, the Netherlands, the United Kingdom, and returned to the U.S., I often watched baggage handlers throw my suitcase atop busses, and feared the worst. What would my parents think of a box of dusty and broken clay?

At the end of the trip, I opened the box, and unwrapped the layers of tissue, expecting the worst. But my figurines survived, and found their way to my house when my parents passed on.

They measure a little over five inches tall, and stand on small circular bases. The detail is incredible, a credit to the artisans who still do similar work in Catania, a city in eastern Sicily, near the toe of Italy’s “boot.” Similar figurines can be found on eBay and other internet sites, with prices generally in the $30 to $45 range. 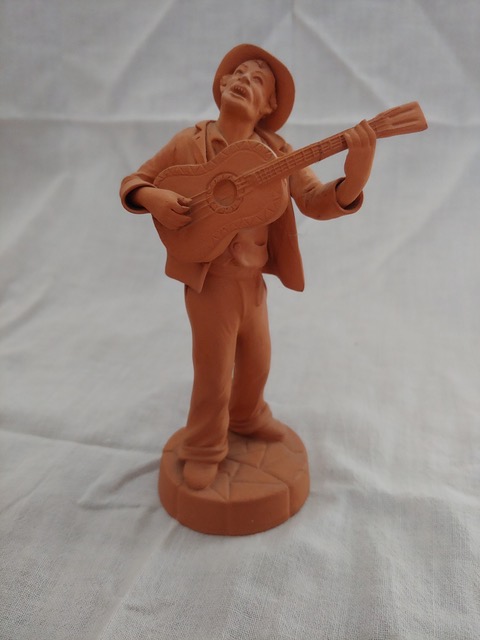 Street musician figurine captures everything but the music itself. 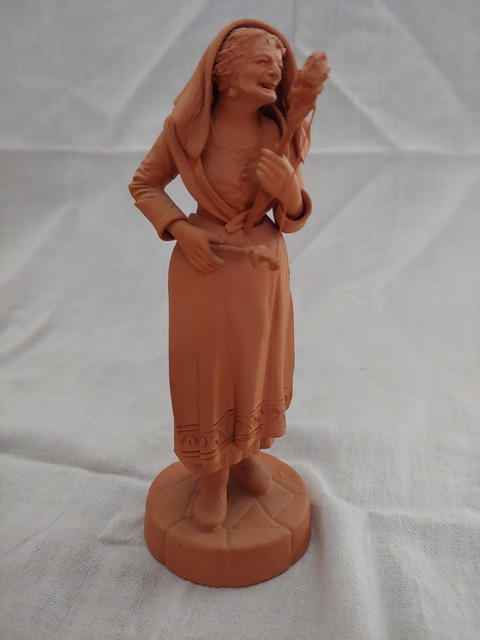