When I was a youngster, we would occasionally spend Sundays with my dad’s stepmother and his two sisters in Hamilton, IL, across the river from Keokuk, IA. I remember it was a bit boring for a pre-school-age kid, as there were no other children around. There were no toys, but I could keep busy looking at their collection of magazines – mostly Life and Look, as I recall.

Now and then, my aunts would bring out a jigsaw puzzle, one of their entertainments in those pre-TV years. The puzzles caught my four-year-old eye, as my elders magically made colorful pictures appear from a pile of various-shaped pieces. The one I recall was a reproduction of an old painting, “Adoption of Flag of the U.S.A.,” according to a handwritten note on the cover of the box. Made by the Tuco Workshops, my aunts’ puzzle had a 1933 copyright.

According to antique writer Harry Rinker, Tuco was a product name of the Upson Company in Lockport, NY, a maker of 3/16 inch wallboard. When the Great Depression hit, the company decided to take advantage of the jigsaw puzzle craze in the early 1930s and used its wallboard to make inexpensive puzzles that it sold through Kresge stores for 69 cents each. The puzzles were cut in wavy horizontal and vertical lines, meaning there were no interlocking tabs, and each piece was different.

My family’s “Adoption of the Flag” puzzle was well-used by the time I came on the scene. Two pieces had been lost, and one of my aunts had carefully recreated them, coloring in the missing scenes so carefully that the substitution was barely noticeable.

When my parents died and I acquired their things, I found that I was the owner of the old puzzle I had seen as a four-year-old. I put it in a closet and forgot about it for more than three decades, but recently I decided to try my hand at putting it together.

It was a challenge. Not only are all the pieces different, they don’t interlock, unlike modern puzzles. Many of the pieces have straight lines but aren’t necessarily border pieces, which added to the challenge. Worst of all, there was no picture to go by. I tried looking up examples of old Tuco puzzles, and found quite a few, but not the one that matched mine. A search for the painting, “Adoption of the Flag of the U.S.A.” yielded several versions, but none matched the image in my puzzle. (I later found a copy of it on WorthPoint.com.) 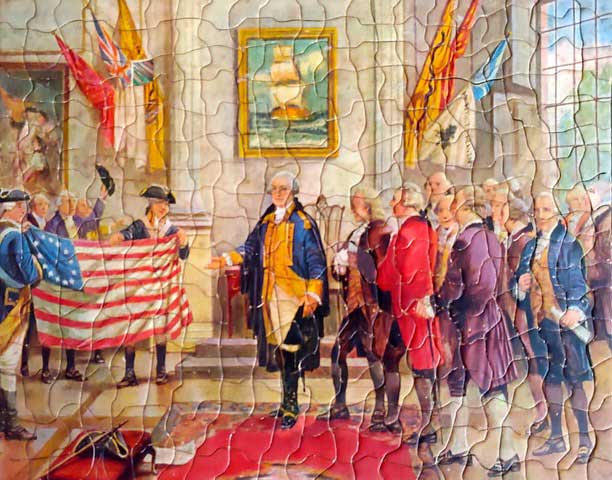 But I persevered, struggling to find border pieces, and found it easier to put together recognizable scenes, until the borders gradually took shape, and everything finally fell into place. I recognized two pieces that my aunts had reconstructed and discovered another piece was missing when the whole thing came together. But the piece, about ¾ of an inch square, was not that important to the finished picture.

The artist didn’t sign his work, and I still haven’t tracked down the original painting. But for most of a day, the puzzle’s 350-plus pieces brought it back to life on my dining room table, some 80 years after I had first discovered it.