Many of today’s youngsters take little interest in the toys of yesteryear. Devoid of today’s electronics and high-tech gadgetry, and handcrafted from basic materials like wood, cast iron or tin, the old toys depended on youthful energy and imagination for their appeal.

Typical of the toys in the World War II era was the simple top. Despite America’s efforts to conserve metal for the war effort, a few companies turned out tin toys during the war years, including tops. Without any internal spring or windup mechanism, the top relied on a metal bar at the top’s center, with a small wooden handle. The bar’s spiral shape caused the top to spin when the bar was pushed downward. Another mechanism produced a melodic sound when the top spun. Centrifugal force kept the top spinning (and singing) for several magical seconds.

One of the manufacturers of tops and other children’s toys in the 1940s was the Ohio Art Co., based in Bryan, Ohio. According to Wikipedia and the firm’s own literature, the company was founded in 1908 as a manufacturer of picture frames and remains active today. It claims to be one of the world’s leading metal lithographers, specializing in precision printing and metal fabrication for major consumer goods companies. Examples of its work can be seen on beverage trays, metal signs, and various product containers. 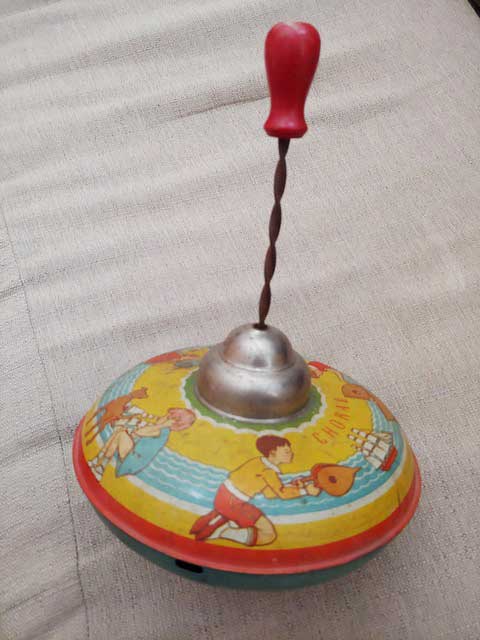 The old top doesn’t work like it once did but still reminds me of the simpler days of my childhood. (Ken Weyand photo)

My top is a bit smaller than some of Ohio Art’s featured tops, measuring 7 inches in diameter, and 6 inches high without the wooden handle. With the handle and spiral “push-rod” extended, the total height increases to about 11 inches. The upper part of the top’s body features four young children playing with various toys around a circular waterway. The word “CHORAL” is printed near the center, and “Ohio Art Co., Bryan, O, U.S.A.” can be found in smaller lettering.

Unfortunately, the top’s mechanism is no longer functional, but I can remember pumping the spiral rod as a youngster and hearing a musical sound as the top spun for several seconds. It was an in-house toy, serving as a consolation prize on rainy Saturdays when mud roads kept the family home and unable to venture out for a day of “trading” at the county seat.

It didn’t take the place of watching westerns and cartoons at the local theater or getting a milkshake and looking over comic books at the town’s pharmacy, but it was an interesting toy in its day.

Similar tops by Ohio Art Co. can be found on eBay and other online sellers, with prices ranging from $16 to $40, depending on size and condition. A variety of designs can be seen, all examples of the quality metal lithography that made the company successful.