“Bugaboo Bill and Other Wonders”

I came across an old book the other day that has me stumped. Was it part of the accumulation of “old stuff” my parents never threw away? Was it a favorite book of a grandparent or other long-gone relative? Or could I have picked it up at an antique store at some point, and forgotten about it?

Whatever its origins, “Bugaboo Bill and Other Wonders” is a treasure, full of fantasy, nonsense rhymes, moral lessons, and short instructive articles aimed at young readers. Although it is doubtful that children in today’s high-tech culture would appreciate it, the book probably delighted and informed many eager young readers in its day.

Published in 1888 by Hubbard Bros. Publishers in Philadelphia, the hardback book’s pages weren’t numbered. My book is in poor condition, with some loose pages and separations along the spine, so it’s impossible to tell exactly how many were there originally. But the book’s subject, “Bugaboo Bill the Giant and Other Wonders,” is represented in the lead article.

“Bugaboo” was an illustrated poem by Palmer Cox, a Canadian illustrator and author, best known for his cartoon books about the “Brownies,” described by Wikipedia as “mischievous but kind-hearted sprites.” Cox was born in 1840 in Granby, Quebec. 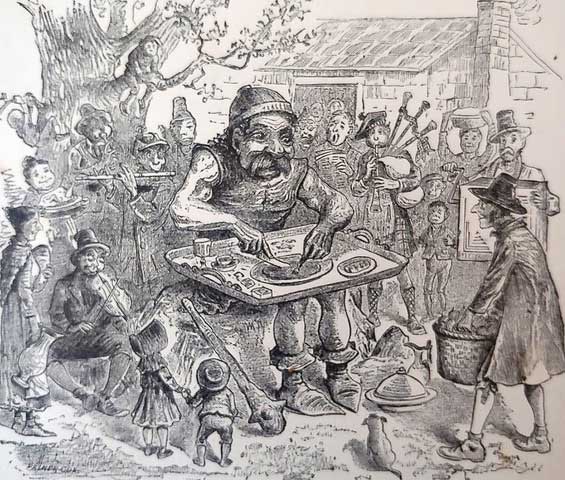 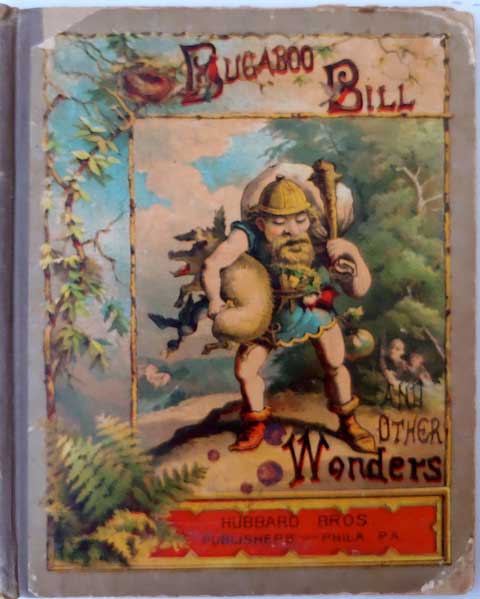 After working as a carpenter, car builder, and railroad conductor, he studied drawing and began contributing illustrated stories to various publications. His “Brownie” series began in 1878 and peaked in popularity in 1883 when it was reprinted in several publications, including The Ladies Home Journal. The Wikipedia piece stated that the series inspired the Eastman Company in 1900 to name their popular hand-held camera the “Brownie.”

Although the Hubbard book doesn’t include Brownies, the “Bugaboo Bill” feature offers an insight into Cox’s creative imagination. Other illustrated stories are typical of the period, and show how children of the 1800s were entertained and enlightened.

Hubbard Bros. was founded in 1868 as a subscription-publishing house. Later they published Bibles, early Palmer Cox books, and several Mark Twain titles. They also published several books for juvenile readers, including the one I acquired.

My great-grandfather, William Weyand, immigrated from Germany in 1840 and lived in the Philadelphia area. A German Methodist, he called himself a “missionary” in an early census, but supplemented his meager earnings selling books. It’s possible “Bugaboo Bill” may have been one he sent to my grandfather to share with his eight children, but I can only speculate.

Not sure if the book has much value in its present condition. But it makes me smile. I think I’ll keep it.