Before there was a state called Arkansas, the mountain community now known as Eureka Springs was already attracting visitors. Early in the 1800s, Indian tribes told of a “great healing spring” in the mountains 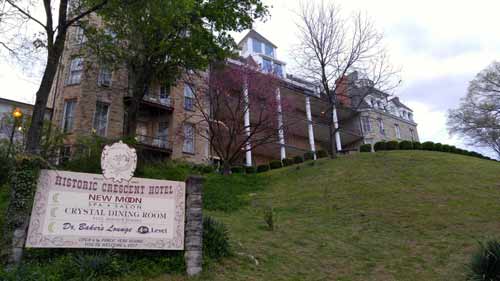 Early visitors were inspired by the story of a Sioux chieftain, who brought his young daughter to the spring known as “The Basin.” According to Sioux legends, the girl suffered with an eye disease that robbed her of her sight. But after she bathed her eyes in the “magical waters,” her eyesight began to return. The joyous event was reported far and wide.

In 1856, Dr. Alvah Jackson took his son, who also suffered from an eye ailment, to the spring, and the boy received a similar cure. Jackson set up a clinic, “Dr. Jackson’s Cave Hospital” near the spring to treat Civil War casualties. When the war ended, he did a thriving business selling his “Dr. Jackson’s Eye Water.”

In 1879, an influential friend of Dr. Jackson, Judge J.B. Saunders, visited Basin Spring and was cured of a “crippling disease.” The judge told his friends, and the rush to “take the waters” began, with travelers crowding around the spring in a bustling “tent city.”

The City of Eureka Springs was founded July 4, and new homes, stores and hotels began to sprout along the steep hillsides. By year’s end the population had grown to 10,000, becoming Arkansas’ fourth largest city.
Promoters called the waters a “precious elixir.” One ad declared, “Eureka Springs has a larger number of citizens above the age of eighty than towns of similar population. The water does it!”

A haven for eccentrics 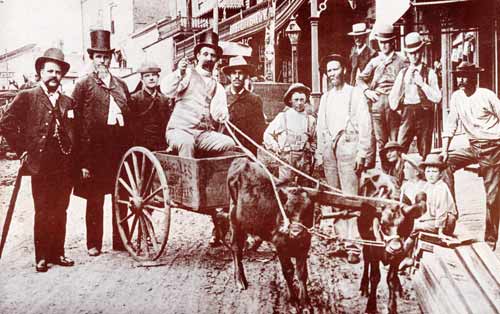 A 1995 illustrated calendar, published by the Bank of Eureka Springs, showed an 1885 photo of a man in his “bull cart.” The gentleman in the top hat is General Powell Clayton, called the “town builder extraordinaire.” (Ken Weyand collection)

Eureka Springs has always attracted non-conformists. Throughout its history it has been home to a variety of “characters” who have helped make the mountain town special.

Even in the 1880s it was acquiring a reputation as a haven for those who chose to be different. An illustrated calendar, celebrating a century of the town’s progress, included a photo of a man driving an unusual conveyance. Apparently unable to walk easily, he rode about town in a two-wheel cart pulled by a team of bull calves. Wheels were from a buggy; the cart was fashioned from a wooden Arbuckle’s Coffee crate.

Other “characters” included Lena Wilson, who used a horse-drawn cart to collect and recycle trash; and a couple of bearded old-timers who rode about the streets on mules.

Eureka Springs’ creative minds have produced many art galleries, unique shops, and cleverly designed houses that seem to defy gravity. Even the buildings and the narrow, steep roads that crisscross the town have their own quirky personalities. 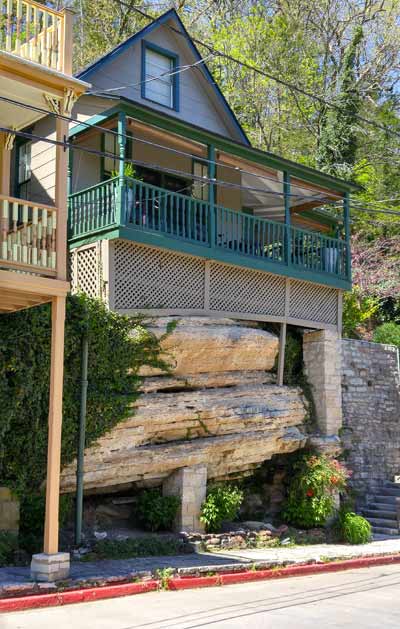 A creatively designed house in Eureka Springs, overcoming the obstacle of a large rock (photos by Ken Weyand)

A breakthrough came in 1882 with the completion of the Eureka Springs Railway, connecting Eureka Springs with Seligman, MO. By 1883, thousands of visitors were pouring into the city annually, many investing in new businesses and homes. During the next two years, Eureka Springs experienced a building boom in Victorian homes and businesses. Many structures can still be seen, lining Spring Street and clinging to steep hillsides. For many visitors, the architecture of Eureka Springs is itself a good reason to visit.

In 1885, construction began on a fashionable new hotel on a high promontory overlooking the city. The first stone structure in town, the Crescent Hotel would boast a hundred large rooms, all steam-heated, with electric lighting, a new attraction on its own. The lobby featured a massive marble fireplace, and the elevator was hydraulically operated. When it was completed the following year, the hotel was called the most elegant hostelry west of the Mississippi. 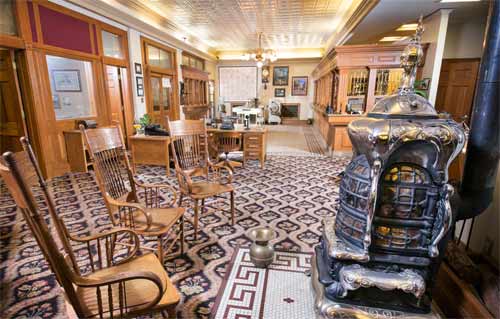 CORNERSTONE BANK – FORMERLY BANK OF EUREKA SPRINGS This thoroughly modern 1912 Bank carries on daily business in the midst of authentic furnishings from the Victorian period, many of which are original pieces. A free Museum with many old pictures, maps, artifacts, souvenirs that date way back to Eureka Springs? founding in July of 1879 which are being carefully preserved by the Bank.

More than 130 years after its construction, the Crescent Hotel is still the “Grand Old Lady of the Ozarks,” to quote Dr. D.R. Woolery, who chronicled the hotel’s history in a book with that name. Guests can use a shuttle between the Crescent and Basin Park Hotel. Other amenities include access to spa services, two restaurants, and dozens more. 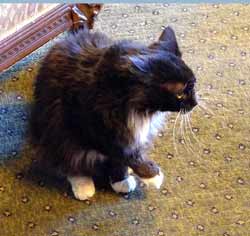 One of the “hotel cats” at the Crescent Hotel

Morris, a beloved cat that greeted guests for 21 years, passed away several years ago. A plaque in the lobby and grave marker in the garden honor his memory. Today, two large cats fill Morris’ role. Called “America’s most haunted hotel,” the Crescent harbors at least eight ghosts, some documented by Ghost Hunters, a popular TV show, and others reported by guests. Ghost tours are offered.

Eureka Springs visitors can choose between dozens of other hotels, and more than 100 restored Victorian galleries, restaurants and
shops. The Bank of Eureka Springs Historical Museum in the 1912 bank displays original furniture, vault door, and many historical artifacts inside the downtown location of Cornerstone Bank.

Their management has digitalized and preserved more than 4,000 old photos, one of which is shown in this article. The Eureka Springs Historical Museum, located in an 1889 building nearby, exhibits photos and artifacts from Eureka Springs and the surrounding area.

Visitors still “take the waters” from multiple springs in the town, which is on the National Register of Historic Places. Events are scheduled nearly every week. For details, visit www.iloveeurekasprings.com.