The high chair, a device for aiding in the feeding of very young children and infants, has been around for decades. As a separate piece of furniture marketed to parents, most historians agree the high chair dates to the late 19th century.

The chair in my family isn’t quite that old, but it’s close to the century mark. I think its last user was one of my children at the home of their grandparents, who kept the chair along with many other family relics.

My chair’s original owners were Walt and Beulah Miller, who lived a couple of miles from our farm in northeast Missouri. Walt’s father, Joseph, took my dad in when he became an orphan in 1900. Dad grew up in the Miller household, and when he married a “city girl” with limited cooking talents, Beulah helped her acquire many skills, including preparing dinner for hungry threshing crews, a formidable challenge. The two women became close friends, and continued helping each other, especially in the fall, when many farms hosted threshing and silo-filling crews.

When I was born in 1937, Beulah gave my mother the high chair she had used to feed her son, Waltman, when he was an infant. Since Waltman was born in 1923 and an only child, the chair probably dates to that year. 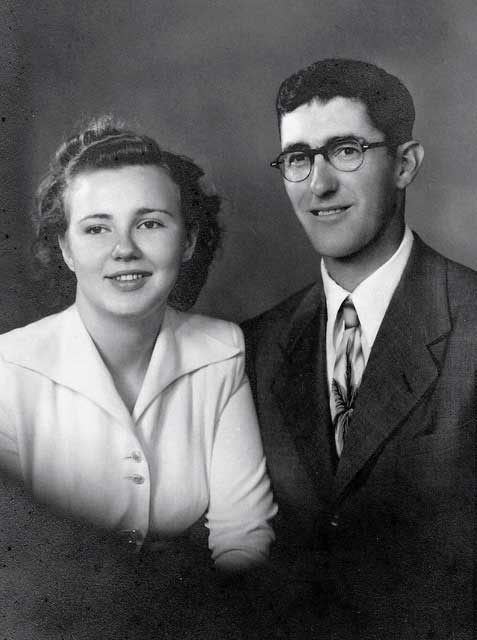 Waltman Miller, shown with his bride, Twila, in their wedding photo. Waltman served in the Korean War, ran an agricultural chemical business, and operated the family’s farm near our home, where he and Twila raised eight children. (photo from Ken Weyand collection) 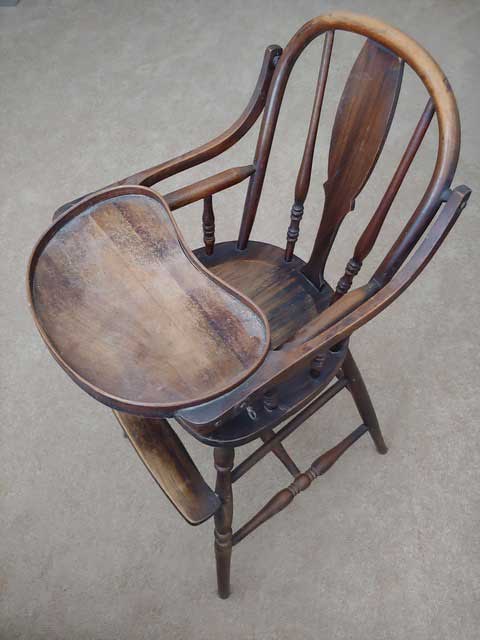 The high chair. Its serving tray could be pivoted up and behind the seat, making it easier to attend to the child. (photo from Ken Weyand collection)

Waltman, who served in the Korean War, married a young teacher and went on to raise a large family. I’m not sure if my parents offered to return the chair, but it stayed in their possession, and probably for a time may have been re-purposed as the holder of a flower-pot. By the time I rescued it and cleaned it up, my parents had passed on and the chair was stored in one corner of their house, topped by a pile of old magazines.

Like most chairs of its type, my chair has a tray with inch-high sides to avoid the worst of spills. The tray swings over the back of the chair to allow a parent to lift the child into the seat, which has no padding. A small footrest is built onto the chair legs. The stained finish is original. Many of the features are replicated in modern chairs, although they are usually foldable and lighter in weight.

I guess I kept my chair as a reminder of my country childhood and as a conversation piece. Many of Waltman’s children have grandchildren today. If any of them read this and want the chair, contact me through this publication. I’d be happy to let it go.

This month we welcome back Ken Weyand, founder of Discover Vintage America magazine. Ken will be writing columns occasionally and they will be printed when space permits. Please check his page on our website for additional articles (discovervintage.com/vintagediscoveries)