One of the few records of my grandfather’s early life and that of his brothers is an old geography book I re-discovered recently in a cedar chest full of other family history. The book, “Cornell’s Intermediate Geography,” was published in 1879 by Appleton and Company in New York. It was described on the title page as “Forming Part Second of a Systematic Series of School Geographies by S.S. Cornell, Corresponding Member of the American Geographical and Statistical Society.”

The book offers some fascinating looks at the world as it appeared – or was perceived – in 1879.

Beginning with definitions of geographical terms and explanations of the science, the book went on to show illustrations or “scenes” in various locations, combined with appropriate maps.

Typical of the time period, the maps indicate principle waterways, mountain ranges, and other physical features. Manmade features include railroads and towns, reminding the reader that in those pre-automobile days there were no major roads or highways.
To me, one of the more interesting maps was Florida. In 1879, the only railroad in the state was the Yulee Line, from Ferdandina in extreme northeast Florida, to Cedar Key, on the Gulf (the line to Cedar Key was abandoned in 1935, with part of the original right-of-way now serving as a nature trail). The Southern half of the state had virtually no towns — Miami wouldn’t be incorporated until 1896. For many years, other attractions in the state were accessible mainly by steamboat, and later by short-line railroads.

The Midwest was similarly bare, with only a few major towns. Kansas City was barely legible. There was no Branson, but Hartville and Forsyth were shown. Kansas City’s population, appearing in a listing near the back to the book, was given as 32,736, and could barely be seen on the map. In the upper part of the state, there were no towns north of Hannibal. Keokuk, IA, long important as a steamboat and railway terminal, was shown prominently. In Kansas, the area west of Topeka was mostly devoid of towns. Wichita wasn’t mentioned: although incorporated in 1870, it was little more than a trading post when the book was printed. 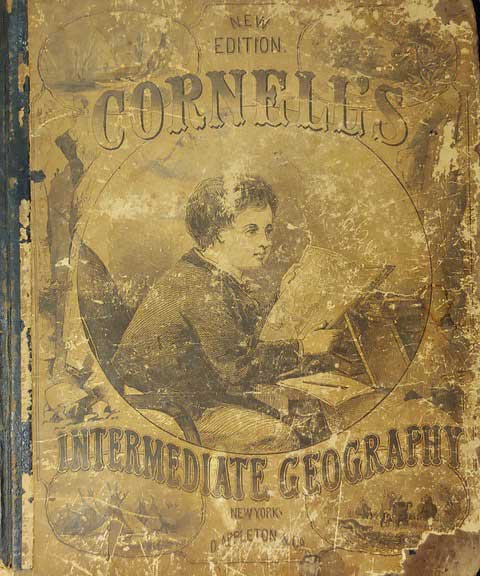 Among the most changed parts of the world were Europe and the Middle-East, where two world wars and numerous other conflicts dissolved countries and created new ones. The German and Russian empires seemed to overlap, with no apparent boundary lines shown. Of course the country of Israel was yet to be formed.

The African continent was also interesting, with few countries delineated. South Africa was named “Cape Colony,” and a nearby region was called “Country of the Hottentots.”

Quaint illustrations appear throughout the book, reflecting the customs and activities of the mid-1800s. Near the back of the book, a “View of the City of New York” shows a collection of low buildings adjacent to a river. There are no buildings that could be considered “skyscrapers.” According to Google, the term didn’t even exist until the 1880s.