One of my favorite decorative glass types is slag glass, made in a number of different colors by a number of 19th- to 20th-century American glassmakers (including Northwood, Imperial, Westmoreland, Akro Agate, and Fenton) and still made by surviving glass companies of the 21st century, such as Boyd, Summit, and Mosser. Among the earliest U.S. producers of slag glass, beginning in the 1860s, were Atterbury & Co. and Challinor, Taylor & Co. England also had a few late 19th-century slag glassmakers, including Sowerby, Greener, and Davidson. The Greener company called its green slag glass “Malachite” after the dark green striated mineral of the same name.

According to the online Glass Encyclopedia (glassencyclopedia.com), slag glass is most commonly found in purple and less often in blue, green, and brown (AKA caramel). This may depend on the section of the country, however, as I see more of the caramel slag where I am in northern New England than I do any of the other colors.

The Corning Museum of Glass (libanswers.cmog.org/faq/143759) has a pretty good theory about the origins of slag glass; it may have been a kind of “end of day” glass in which individual workers were allowed to experiment with leftover colored glass batches to make items of their own. If that was the case, it didn’t take company brass long to see the market potential in producing deliberate recipes of slag glass.

I recently discovered, in an estate sale buy, that Westmoreland, in addition to making slag glass with milk glass, also mixed colored glass with a creamier off-white usually called almond. For example, at a recent local estate sale where I live in Vermont, I purchased a large, perfect-condition hen on nest in which the alternating complement of the caramel is a cream-colored glass, probably almond. Westmoreland often made items in the almond color alone, which is a very light tan color, but in the items in which the lighter non-white color is mixed with caramel, it takes on a deeper, almost golden color. 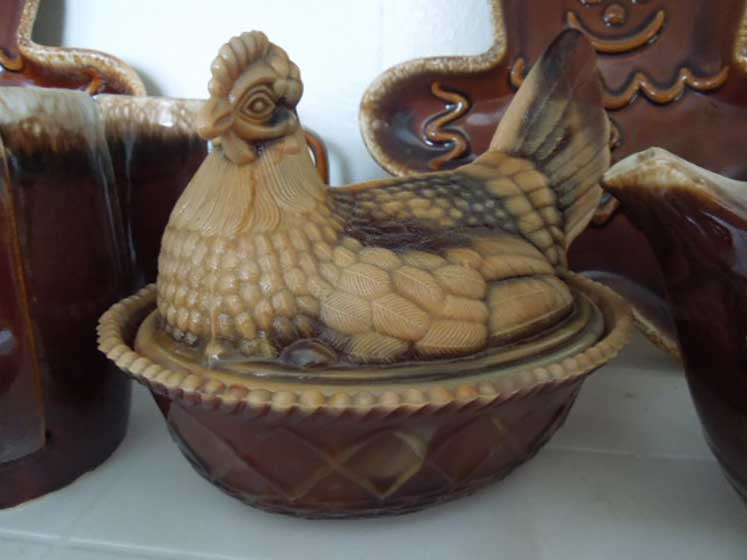 I recently bought this large Westmoreland hen on nest at an estate sale in a very old farmhouse. It displays well my extensive collection of Hull and McCoy brown drip pottery! It is in perfect condition, without the chips one often finds around the inside of the lid and the inside rim of the base on such items (The line in front of the lid is a seam). Westmoreland made its slag in two forms, one using milk glass as the complement and the other, as here, a creamier color, probably almond. The mark dates from 1940 until the company’s closing in 1984. I paid a very reasonable $20 for it.
(Image courtesy of the author)

One of the most prolific makers of slag glass in various colors was Imperial, which made it in purple, green, brown (caramel), and red. My parents had a collection of Imperial’s caramel-colored slag glass that I was only too happy to help them collect over the years as it made great presents from me for special occasions. A crucial information resource on Imperial slag is Volume II of the three-volume book set on Imperial Glass, titled Imperial Glass Encyclopedia by James Measell, an unparalleled expert in many types of collectible glass.

In the 1990s, Fenton had production trouble with a cobalt slag glass it called “Almost Heaven,” in which the blue would not fuse well with the milk glass and usually broke apart in the kiln; those items that made it out were sold in the Fenton Gift Shop.

Some Fenton colors from the 1930s, such as Mandarin Red, Mongolian Green, and Periwinkle Blue also have a slightly “streaky” appearance, but these are not referred to as slag glass in which the alternating white or cream glass is thicker and most clearly its own color. Similarly, Fenton also made, in the 1980s, many items in a glass it called “Blue Marble” (light blue with white streaks) that is not known as slag.

For collectors, an attractive characteristic of slag glass is that every piece made in it, of whatever color, is a “one of a kind” since there is no way to control the amount of streaking nor which of the two colors will predominate in the finished glass. In some cases, the glass is primarily white with just a few streaks of color. In other examples from the same mould, the colored glass will predominate. Collectors tend to prefer specific color mixes, although the comparative scarcity of some of the items made in slag glass may mean buying what color mix you can get!