Fenton Art Glass continues to heat up the market

Fenton Art Glass continues to heat up the market

As a collector, I came late to Fenton Art Glass, just a decade or two before the company closed in 2011. In those years, I bought Fenton affordably on the retail and secondary markets. Now, here we are at 2021, and the market in Fenton glass is super hot – and not just online. I can barely keep my two Fenton glass booths restocked in a local Vermont antique mall.
What’s up with that? Well, Fenton glass is beautiful and very well made, but the company is no longer making it. Recently, also, the Asian market has discovered Fenton, and buyers from Asian countries are scarfing it up on the secondary market as fast as they can find it in online auctions. That all means Fenton prices are up dramatically.

Fenton glass animals are particularly pricey right now. Years ago, you could buy them for $35 apiece or less, but the price has doubled, even tripled since then. One of the reasons is that veteran Fenton collectors here in the States are running out of space, and the animal models are easy to fit into display areas. That means more buying competition for the figurines available. I have a lot of Fenton animal figurines, most of which I’m keeping. Some I’m moving to my antique mall booths, pricing them at half what the going price is just about anywhere online and still selling them for more than what I paid for them 20 or so years ago.

Older undecorated Fenton glass, especially in colors such as Red Carnival, Mandarin Red, Topaz (AKA Vaseline), tends to be very pricey. Studio Glass by artists such as Dave Fetty or Kelsey Murphy and Robert Bomkamp is highly desired. Glass that Fenton made for other companies is also in high demand as it was usually made in very limited production runs.
Beginning in 1970, glass made by Fenton, was marked on the bottom, usually with a Fenton logo. Fenton started making its own glass as early as 1907, however, and anything made before 1970 is not marked.

One of the decisions Fenton collectors have to make is whether they want to buy glass made by companies such as Mosser that have bought up the Fenton moulds at auction. Clearly, many Fenton collectors do. But I have so much original Fenton glass (and still can’t help buying more when it catches my eye in an antique shop) that I’ve pretty much decided not to buy Mosser Glass from Fenton moulds – even though Mosser is a perfectly fine company that makes excellent glass. 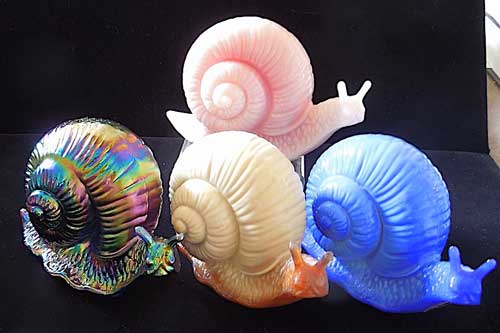 Snail model made in Fenton glass, clockwise from top: Rosalene, Periwinkle Blue, Chocolate, and Cobalt Marigold Carnival. This model is very finely detailed, from the shell to the face and rippling body of the snail. As one example, the Chocolate snail was made in 2005 for the Fenton Art Glass Collectors of America at $25 for members. I managed to collect 10 sold prices for it in 2021, in a range from $55 to $110 (average price just under $80). Prices on the other three in the photo were comparable. Photo courtesy of the author

Another collecting factor is whether the painter in decorated glass was originally employed by Fenton, as there are now non-Fenton glass painters, of varying levels of expertise, who are buying up Fenton blanks (unpainted glass) to decorate. Some of the best of these painters, such as Vicki Carpenter, have a huge market demand for their pieces, which drives the prices for their work to astonishing levels. Also, some former Fenton artists, such as Michelle Kibbe, JK Spindler, and Kim Barley, are still employed at the Fenton Gift Shop in West Virginia, which now deals in Mosser glass made from Fenton molds and painted by these artists. These also command high prices, on both retail and secondary markets. Most Mosser-made glass is marked, but Mosser made for the Fenton collector clubs is not.

It will be interesting to see whether the super-heated market in Fenton holds. We’re not talking about Beanie Babies here, a flash in the pan that was born one year, enjoyed two or three years on the secondary market, and then pretty much fizzled. Still, secondary market prices for Lladró porcelain, for example, have been in the doldrums lately after years of a once-hot but now cooling Asian market. As far as the quality of American glass goes, Fenton can certainly hold its own, but we’ll just have to see whether today’s hot market in it can sustain itself.

Peggy Whiteneck is a writer, collector, and dealer living in East Randolph, VT. If you would like to suggest a subject that she can address in her column, email her at allwritealready2000@gmail.com.