Dark brown dinnerware with a foam drip edge? It may not sound appetizing, but seeing is believing, and, in the 1960s through the 1980s, a few American pottery companies were producing a shiny-glaze, dark brown dinnerware with an ivory foam trim to meet a growing consumer demand. I started collecting this Brown Drip pottery about three decades ago when my mom was still alive. She had an entire collection of it herself, stashed in the cellar of my parents’ home, which she gave to me when she heard I was collecting it. So now I have what I’m quite sure is one of the largest collections of Brown Drip pottery anywhere.

Most of it was made by Hull, which called it House ‘n Garden, which the company also made in other drip colors under the brand name Crestone, including sand, gray, olive green, agate green, turquoise, and tangerine. McCoy Pottery made a Brown Drip indistinguishable from Hull’s, so I tend to mix and match them (A Pfaltzgraff version has a noticeably darker brown that doesn’t blend well with the other two). 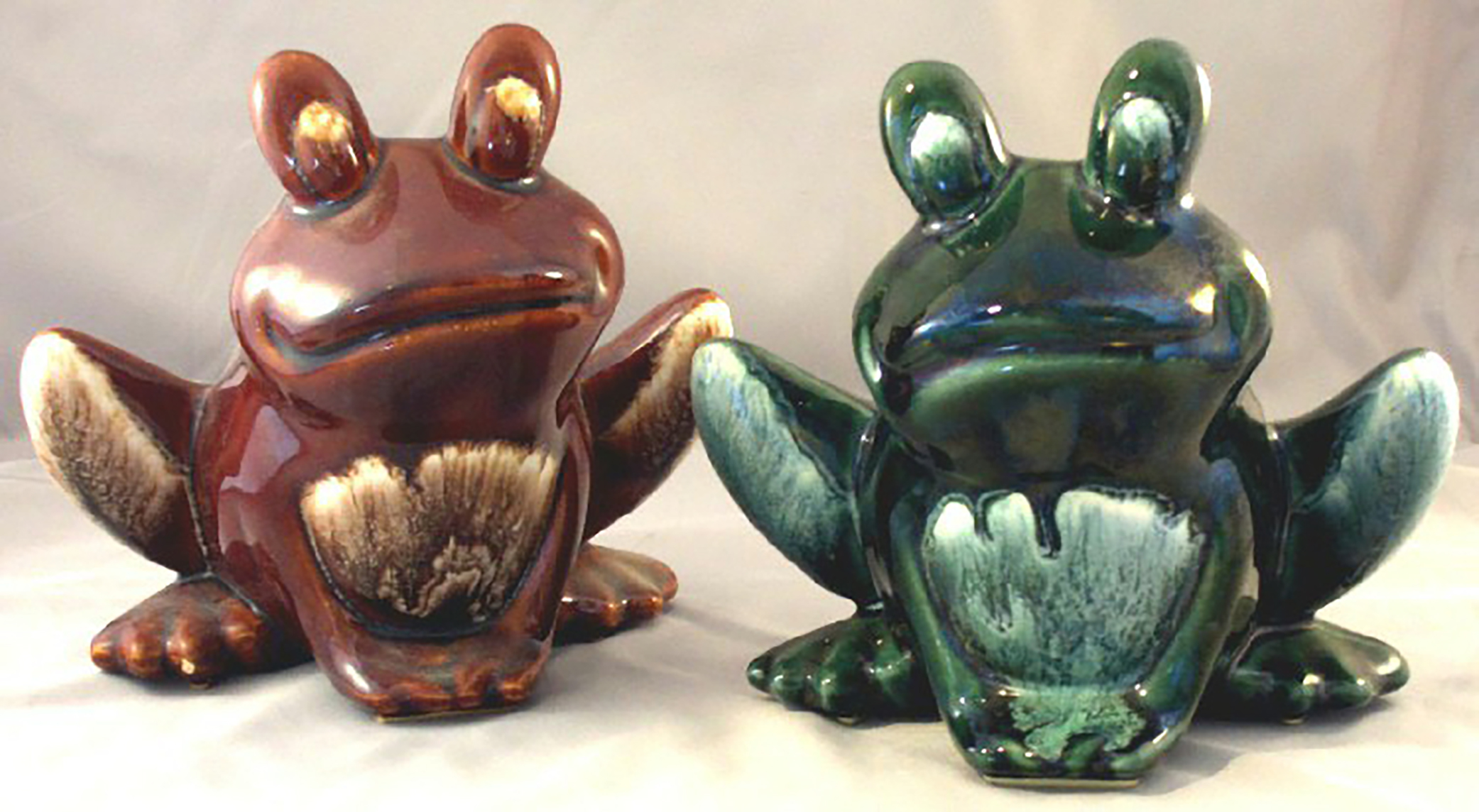 Here are two colors of an exaggeratedly whimsical Hull frog planter in foam drip designs, Brown Drip at left and Green Agate at right. Most Hull House ‘n Garden on eBay is very modestly priced (basic tableware under $10), but recent eBay sold prices on this seldom-seen model were $40-$55, with the equally scarce Brown Drip Hippo planter gaining similar prices. While these two frog examples are pristine, many existing copies have chips on the protruding eyes or legs – which, of course, drastically reduces both value and the availability of good examples. (Photo courtesy of the author)

American brown glazed pottery is marked with the maker and brand. Anything that has a red clay ring base but otherwise looks like Brown Drip is probably Asian (usually unmarked) or Canadian.
The American companies also made brown drip decorative pieces such as planters. Although Hull and McCoy potteries are better known for a variety of multi-colored decorative wares, American-made Brown Drip pottery is still popular with collectors. There’s even a Facebook group for it: www.facebook.com/groups/721067218053951/.

You can find a lot of the Brown Drip, mostly bowls, coffee cups and mugs, and a few of the larger oval-shaped serving dishes. Dinner plates are harder to find in unmarred condition; those that have been used for their intended purpose tend to be scratched by the metal utensils with which they were used at meals. As with most collectible tableware, many homes bought only what they needed to set a basic table. Consequently, much of what one finds in antique stores today are the basic starter pieces such as cups and individual serving bowls. Some of the harder-to-find pieces (e.g., cookie jars, cannisters, and unusually shaped platters and planters) can command high prices.

Most Hull or McCoy Brown Drip is marked as oven safe and also distributes heat well, which is why I use my Hull pie plates when I’m baking pies and some of my casserole dishes when I want to serve directly from oven to table. However, these wares are heavier than most tableware, which can make them more difficult to handle. The Hull covers on everything from sugar bowls to serving pieces have attenuated cover knobs that can make them difficult to hold onto. The Hull teapot also has a shortened spout that makes it difficult to pour cleanly, for which reason I prefer the McCoy teapot.

When the Shawnee Pottery closed, Terrace Ceramics bought the molds from Shawnee’s corn ware lines and made them in a Brown Drip form it called “Maizeware Colonial Brown.” The color is indistinguishable from the Hull and McCoy Brown Drip and matches up very nicely with them (Shawnee originally made these molds in colors it called “Corn King” with bright yellow ear kernels and dark green leaves, “Corn Queen” with light yellow kernels and light green leaves, and white corn ware with two-color green husks. Along with its Colonial Brown color, Terrace Ceramics also made the corn ware in paler versions of the original Shawnee corn colors).

Hull Pottery went out of business in 1986, and McCoy (under various names and ownership) went out in 1991. Terrace Ceramics itself went out of business in 1965, just four years after the Shawnee Pottery closed in 1961. As with American glass companies, the second half of the 20th century was not kind to American potteries as cheap imports became more popular in the retail marketplace.

Peggy Whiteneck is a writer, collector and dealer living in East Randolph, VT. If you would like to suggest a subject that she can address in her column, email her at allwrite@sover.net.