As a current member and former Board member of the Fenton Art Glass Collectors of America (FAGCA), I was very glad to be able to attend the organization’s annual convention in Williamstown, W. VA, an event which resumed at the end of July after being forced into cancelation during the 2020 COVID shutdown. I’d already noted a heightened interest in Fenton glass during the epidemic, with a proliferation of new Facebook interest and auction groups about it. 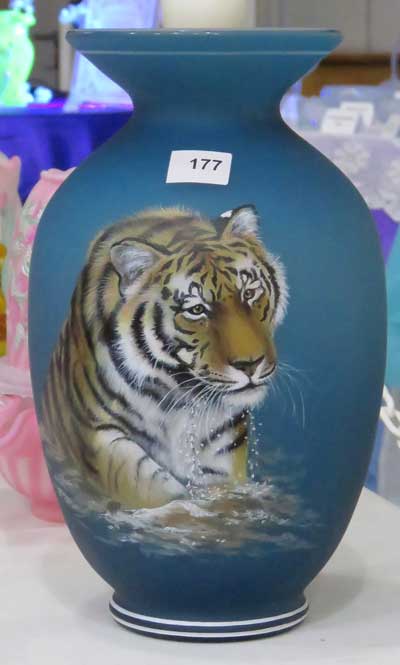 Highest price paid at the July 2021 FAGCA consignment auction was $900 for this one-of-a-kind vase by CC Hardman, painted with a tiger on a Fenton Azure Blue vase. The detail is stunning, right down to the water dripping from the tiger’s mouth. (Image courtesy of the author)

Now, I was especially interested to find that attendance at the annual convention was more than 100 conventioneers, the largest number in several years. Many of the conventioneers had also attended the convention of the National Fenton Glass Society (NFGS, a spinoff group from FAGCA almost 30 years ago), which had been held in the days just prior to the FAGCA convention.

I was one of the featured speakers at the FAGCA convention, where I used a PowerPoint presentation and live glass examples to talk about Fenton animal and bird models. Fenton animals have become not only a draw for new collectors but also a popular alternative for those longer-time collectors whose massive collections mean they’ve had to resist acquiring larger items. Some of these animal figurines are scarce today, and that drives price. Actually, in tracking prices for items in my own collection during 2020 and 2021, I’ve noted a marked increase in competitive pricing on many of them. As little as five years ago, the average price on the most collectible of Fenton animals was $35-$50. Today on eBay, the price for desirable Fenton figurines is $65 to more than $100. An example has been the accelerating price for a small mosaic owl made by Dave Fetty in 2006, for which I paid $100 on the secondary market. In 2020-21, the range of actual sales has been $254 to $425 (the highest price paid twice, in two different live auctions in 2021).

For vases, bowls, and other shapes produced by the company, sale prices can also include hundreds of dollars. When the Fenton company closed, the family retained some of its moulds and sold the rest to the two national collector groups and to other glass companies. Much of post-2011 Fenton hand decoration is done today on Mosser glass as painted for the still-operating Fenton Gift Shop. These pieces are hand-decorated by former Fenton artists such as JK Spindler and Michelle Kibbe, whose signed names on each Mosser Glass from a Fenton mould can still command very high prices. These artists have also been able to find a few original Fenton blanks for one-of-a-kind painting projects, and I always keep my eyes peeled for those.

Among the most popular former Fenton artists working today is the newly elected President of the FAGCA board, CC Hardman, and Dave Fetty, who still works blowing glass despite advanced age and his recovery last year from a COVID hospitalization. Both artists have produced work in original Fenton glass that commands big bucks today.

In recent years, FAGCA has been the recipient of a large bequest from the estate of Jacob Rosenthal, who had a massive collection that he left to the club along with a generous financial bequest, from which the club is using the interest to finance larger projects. The club is also aware that older collectors are challenged about what to do with their often very large collections given that their closest heirs, children now in their 40s and 50s, don’t seem to be interested in it. It does appear, though, that young grand- and great-grandchildren are showing a marked attraction to this lovely glass. It will take years, of course, for them to grow into the ability to acquire their own collections. In the meantime, since I do not have children of my own, I’ll be bequeathing most of my collection to the Fenton Art Glass Collectors of America.

Peggy Whiteneck is a writer, collector and dealer living in East Randolph, VT. If you would like to suggest a subject that she can address in her column, email her at allwrite@sover.net.