Old advertising items can be a fun and affordable collecting gig, and there are many useful and interesting ways to enjoy them! The graphics are often colorful and the taglines are catchy.

Back in the days when books on collecting interests were being produced in greater numbers than they are today, there were collecting guides on advertising collectibles featuring everything from Cracker Jacks to automobiles. These can still be purchased on eBay and other online sites.

Among the most functional old advertising collectibles are the wooden boxes that were used to transport vegetables, produce, and other consumables in the age before cardboard. Advertising for the inside product was often papered or painted on the wooden box ends. These boxes can be very functional for modern use as containers for cookbooks and other hard-to-contain household items. Crates with original labels still attached, and with both wood and label in fine condition, can be surprisingly expensive, probably due to their relative scarcity as items that were purely functional at their inception and not necessarily intended to last.

Cans and Can Labels

Years ago, in my favorite antique shop haunts in Vermont, I found a dealer who had happened upon a stash of what’s called “new old stock” consisting of original but never used paper labels for canned fruits and vegetables. These dated from the very late 19th and early 20th centuries. They were exceptionally colorful and detailed. I bought several of them that I still use to decorate the walls of my kitchen (A caution for serious collectors: original advertising labels, such as those this dealer was offering, have solid color; modern reprints feature telltale dot-matrix printing that is easily detected under a magnifying glass).

Many of these labels were produced by Olney & Floyd, which, before it morphed into its current identity as G.J. Olney Machinery (still family-owned by the third generation of Olneys), was a vegetable canning factory started by George F. Olney and C. Frank Floyd. The oldest of their canning labels date from the 1880s. By 1915, though, Olney & Floyd was already focusing, as it does today, pretty much exclusively on producing food processing machines. This makes the original labels from the early years of the company antique by any definition.

Old metal advertising signs can also be found in antique shops. Collectors look for signs in good condition without serious paint damage. These can range from relatively small to signs that were large enough to be posted outside buildings, such as signs for automotive products made for use in commercial garages or signs for soda brands made to post outside general stores. As with paper labels, these have been widely reproduced, especially signs advertising Coca-Cola, so look for metal signs with signs of wear (which can also be produced by artificial stressing) such as rusting and other markers around fastening corners. Prices on these range from modest to close to outrageous.

The Pillsbury Co. was especially successful in getting its name before the public not only in baking products but in a series of ceramic kitchen sets featuring items such as cookie Jars, napkin holders, utensil holders, and salt and pepper shakers. These were made in two or three series, the most desirable to collectors being the first in 1988; these were actually marked on the base with the year of production. Later versions show design changes over time, ranging from slight to marked. All these official Doughboy issues had the name Pillsbury in a blue logo on the front of the chef’s hat’s rim. Even before that, Pillsbury made a Doughboy bank marked 1985 on the base and, in 1972 and 1973, a family of Doughboy toys in vinyl. Later versions of these vinyl dolls were also made, again with various design changes. All the Pillsbury Doughboy items are very affordably priced on the secondary market. 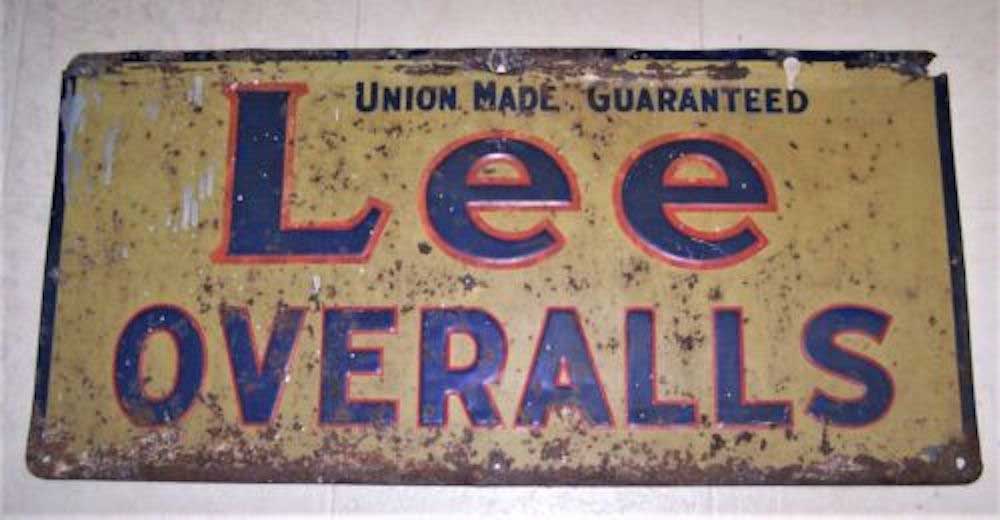 A metal sign for Lee Jeans from the 1930s and taken from a building and measuring 11 3/8” X 23 ¾” sold on eBay in early November of this year. The seller wasn’t pulling any punches on its condition: ”Lots of Wear from over the years, Minor Bends, Surface Rust Thru-out, Some Old Paint Spatter & Drips and it is Filthy Dirty.” The hyper-honest description didn’t deter bidders: the item sold for $390 in a bidding war involving 57 bids! (Image courtesy of eBay)