The small town of Council Grove is getting ready for a big party to celebrate the Santa Fe Trail’s 200th anniversary as a major route for trade in the 19th century.

The Rendezvous at Council Grove, scheduled for Sept. 17-19, will feature a host of activities designed to highlight life and historical events that would shape the history of the trial since 1821. A pageant sponsored by local group Voices of the Wind, made up of Konza Indians from the Kaw Nation, will “depict the changes affected by two vastly different cultures.

As the Kaw Indians were being relocated and European American settlers were beginning to populate Council Grove on the Santa Fe Trail, the dynamics of these two cultures co-existing proved to be intense,” according to the group’s website. The rendezvous also will include a mountain man exposition, an antique wagon show, and blacksmithing demonstrations.

The Voices of the Wind performances take place in the old Neosho riverbed near historic downtown Council Grove and adjacent to the Santa Fe Trail crossing on the Neosho River. The production incorporates historic photos, images of the prairie landscape, and video images with the live-action of a pack train, wagon train, stagecoach, riders on horseback, tepees and the campfire of a Kanza village, according to event co-organizer Diane Griz. 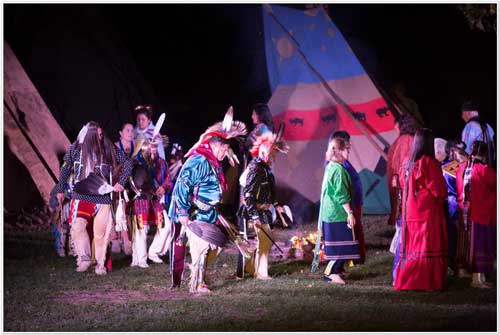 Konza Indians from the Kaw Nation perform their Voices of the Wind pageant at a previous event. The performance will be a highlight of this year’s Council Grove Rendezvous. (Image courtesy of Facebook)