You might be surprised to learn that many items of 17th and 18th centuries still come up for sale at modest prices. Also, there are many collectors around the world, including the United States, buying items dating to the American Revolution. Both British and American sides of the war are popular. This includes everything from military and clothing buttons to eating and serving items.

The great hunt for old pewter was revived in 1976 during the Bicentennial celebration. Not only were collectors on the hunt, but reproductions were made by the thousands. As you are about to learn, they are a continuing problem for todays’ collectors.

Historically, the making and use of pewter items dates back 2,000 years to Roman times. These were primarily utilitarian objects.
Fast forward several hundred years to Europe. The average person was using wood utensils. The wealthy and royalty used pewter and considered it a luxury item. Pewterers identified their work stamped with a mark called “touchmark.”

Before the American Revolution, the British used a lion image touch mark. Pewter was marked not only by the makers but by the owners. They would stamp or engrave their initials on important pieces or family crests or coat-of-arms.

In Colonial America, there was such high regard for English pewter that many early pieces were stamped “London” or “old England.” to make them more sellable. In Jamestown, VA, and in New England, by 1630, newly arrived Colonists brought pewter from England. Pewtermakers trained in England began working here.

In America. during the American Revolution, many pieces of pewter were donated to be cast into musket balls. 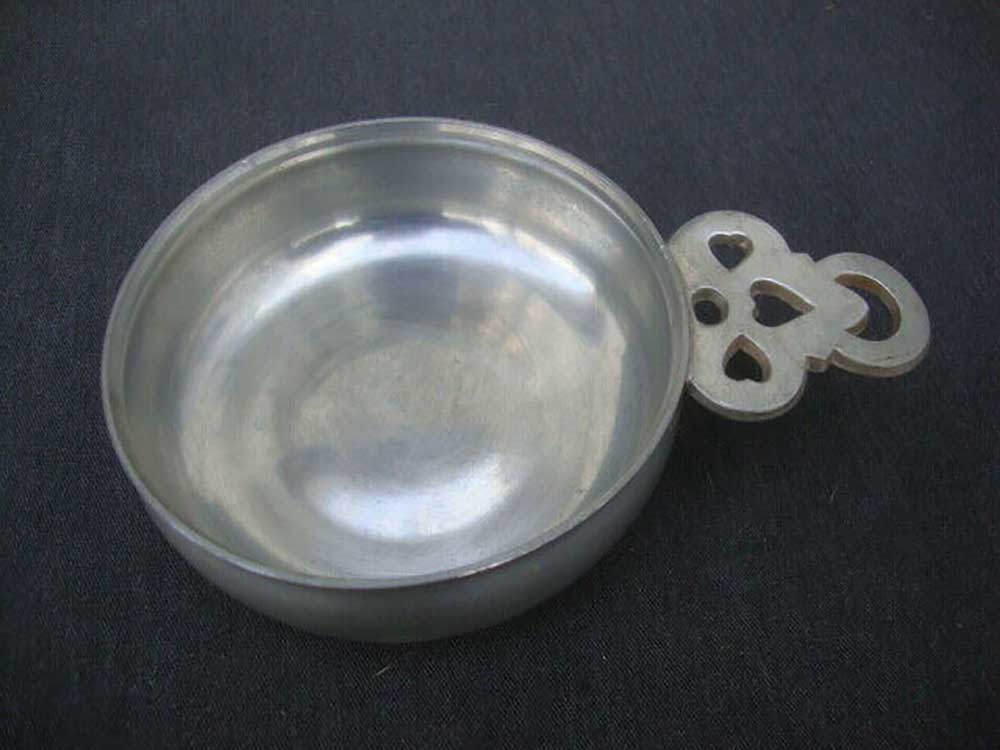 You don’t hear much about antique pewter buttons, but they still turn up. The British and American uniforms, both Army and Navy, used them on uniforms.

Pewter buttons were in high demand for women’s and men’s clothing in 18th and early 19th century England and America. Motifs included floral designs and stars. Designs were cast or stamped. Currently, a single button could sell for $175 or more. There are reproductions of the many designs offered on the Internet.

Reproductions of American pewter utensils were made in the 1920s-‘40s by the Stede Co. in Germany. They are marked with a horse head in a square and “Stede.” Prices are usually less than $50. Reproductions are still being made by individual pewters.