Summer al fresco Before packing up a seasonal picnic, feed your head with these historical facts 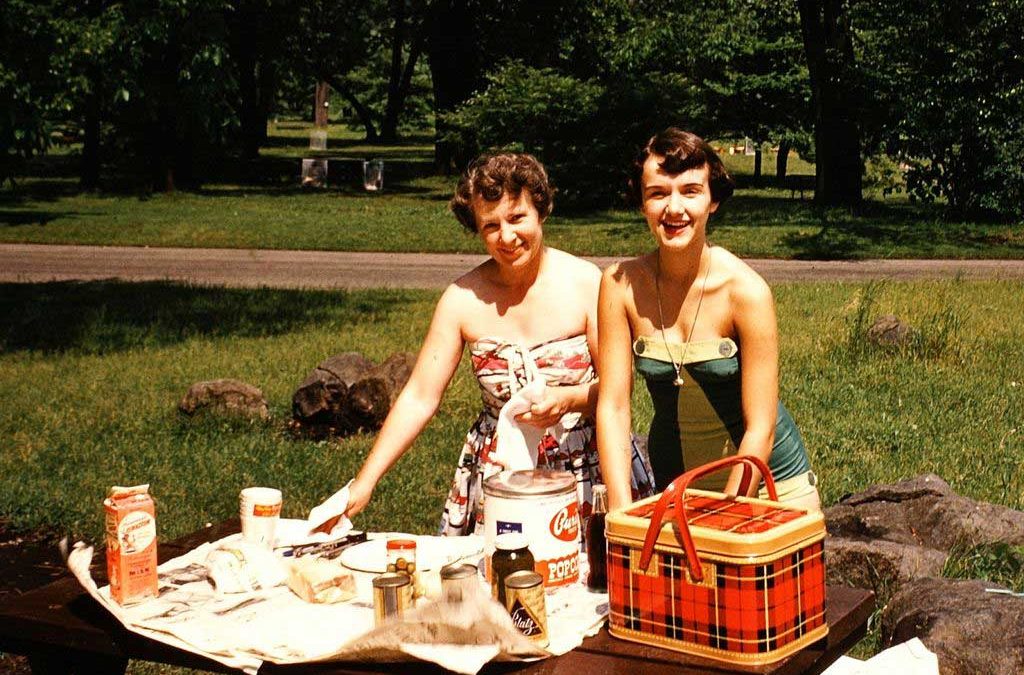 Before packing up a seasonal picnic, feed your head with these historical facts

One of the great joys of pleasant weather lies in the simple picnic, a summer activity whose history is as varied as the lunch offerings to be found there. The late cook and renowned foodie James Beard put it well when he observed that “picnicking is one of the supreme pleasures of outdoor life.”

Before the advent of the very word ‘picnic’ itself, according to May 26, 2013, NPR broadcast, picnicking as an activity could be found in the medieval lore of Robin Hood and his Merry Men, who traveled through the depths of Sherwood Forest, dining informally on bread and cheese – washed down with ale, of course.

The origins of the word ‘picnic,’ meanwhile, are up for debate, but what we do know for certain is that it first appeared in a French satire in which the primary character, named ‘Pique-Nique,’ is presented as a gluttonous protagonist who led a revolution against the ruling class in 17th-century France. Since he was known for eating large, lavish meals, Pique-Nique’s name, which literally translates to “To peck a small amount,” was an exercise in irony.

In the 1700s, enjoying a picnic was an activity indulged in mostly by aristocrats, who requested that attendees bring an item to share, such as a beverage. If they wished, attendees could opt not to bring anything to share, but they could help pay a portion of the overall cost of the picnic instead. At these picnics, while servants would dish out the food and drink, the aristocrats especially enjoyed the wit and rich conversation of their peers, so the picnic was viewed as an activity for the refined and educated. Playing music also was a common accompaniment. 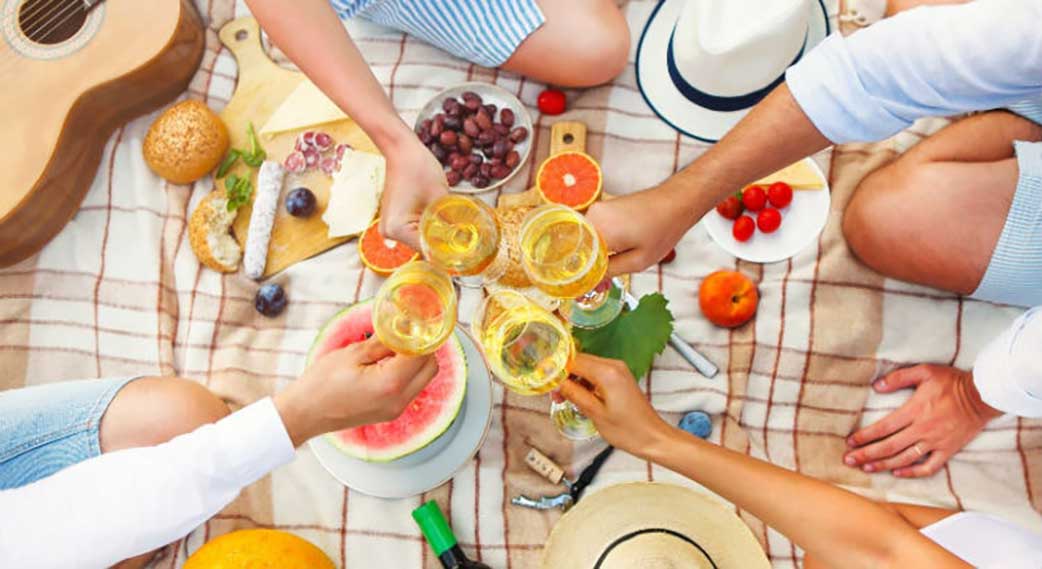 Whether you opt for a wine, a fruity cocktail or a traditional lemonade, your drink selection is sure to be the centerpiece of
your picnic. (Image courtesy of Our Table)

“The original definition of the word ‘picnic’ denoted something like a potluck, so you would have a bunch of people getting together, and each would be contributing to the feast,” food historian Lynne Olver told NPR in the 2013 broadcast.

The face of the picnic changed completely during the French Revolution, when members of the aristocracy immigrated to England and, their fortunes shattered by the conflict, tried to adapt and maintain their former quality of life.

“This led to two important developments,” according to a 2019 article written by Alexander Lee and published in the periodical History Today. “The first – and shortest-lived – was that, in London, the picnic became less refined and more raucous. This was thanks to a group of 200 wealthy young Francophiles, who – in late 1801 – founded the ‘Pic Nic Society’. Held in hired rooms in Tottenham Street, their gatherings were self-consciously extravagant. Every member was required to bring a dish (decided by lot) and six bottles of wine.”

Who ever heard of an indoor picnic?

Until the early 1800s, picnics were held exclusively indoors. With the dawn of the new century came the activity’s move to outdoors. It would be another 100 years – the early 20th century – before outdoor picnicking became more popular than the indoor version.

“What caused this change is somewhat unclear, but the most likely explanation is that the socially aspirational simply applied a fashionable French word to a pre-existing practice, without being aware of its connotations,” Lee writes. “One of the results of this was that picnicking ceased to be associated with music and dancing and became a simple meal to which people were invited by a host. Another was that it became both more ‘genteel’ and – thanks to the idealisation of the countryside – more innocent.” 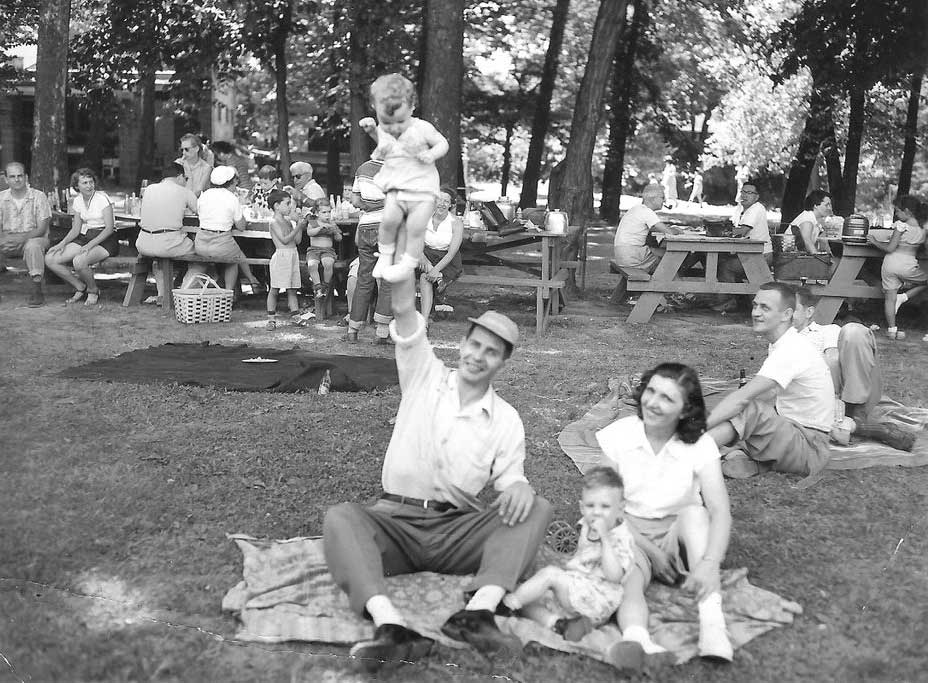 The perfect picnic – the ingredients are merely food and fun

Always remember that there’s no hard and fast rule to making the perfect
picnic – the ingredients are merely food and fun. (Image courtesy of Reader’s Digest) 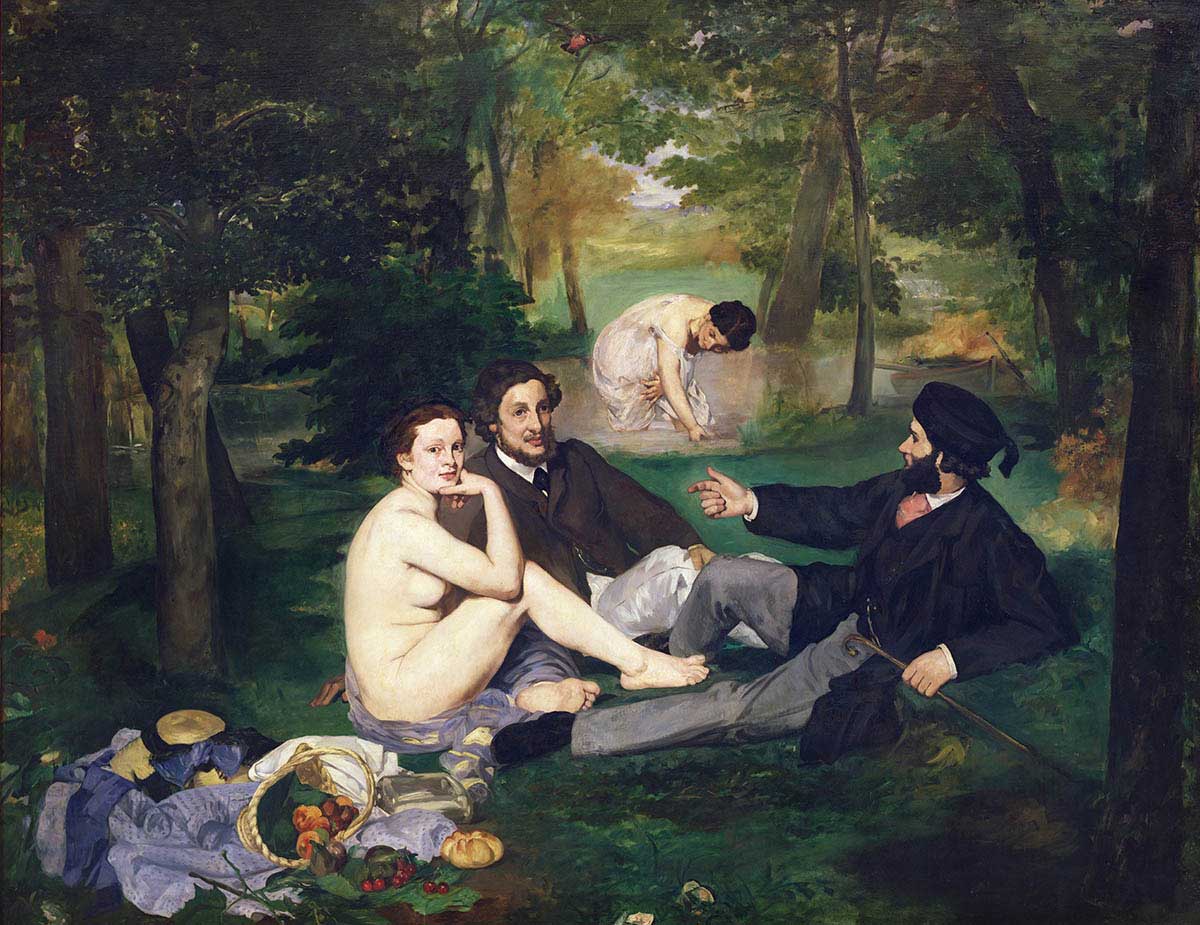 Portrayed the picnic as a hedonistic activity

Surprisingly, picnics were a moral issue in the 18th and 19th centuries, when they found their way into both the visual and written arts; though paintings, poems and novels portrayed the picnic as a celebration of innocence and simplicity in life, others still showed the picnic as decadent and hedonistic, such as the nude picnicker in Manet’s “Le Dejeuner sur l’herbe” (1862).

In Victorian England, if one were having a picnic outside, according to the NPR broadcast, one had to include “tables, linens, crystal, chairs and servants – and gourmet fare, of course.”

Author Katherine Mansfield, in her blog The Vintage Kitchen, writes that as picnics moved outside and became more casual, the look and the food that accompanied the activity changed drastically.

Economical, spontaneous, and available to everyone, picnics naturally turned destinations into dining opportunities. All you needed was a basket, a blanket, a small collection of foodstuffs, and an adventurous spirit.”

A tisket, a tasket, a picnic basket

And as the 19th century gave way to the 1900s and the pioneering invention of the automobile made the countryside and nature more accessible to those wishing to enjoy a picnic, merchants began to produce baskets in which picnickers could carry their bounty. Around the time when British novelist Kenneth Grahame’s animals dined from a picnic basket in “Wind in the Willows” (1908), the picnic basket (also referred to as a “picnic hamper”) was invented.

“Picnic basket kits as we know today — having placeholders for dishes and silverware and glasses and napkins — actually begin to appear at the very dawn of the 20th century,” NPR’s Lydia Zurow writes.

Antique and vintage picnic baskets, usually made from woven wicker (though aluminum picnic baskets began to be manufactured in the mid-20th century in various colors), can be easily found online for less than $100. Sites such as Chairish.com have some options that cost up to $200, some with stenciled images or other embellishments.

Slow down, enjoy the finer things

Mansfield writes that when it comes to picnics, one thing that hasn’t changed throughout the centuries is an enjoyment of the finer things in life.

“The vintage-style picnic favors china plates and real glassware, classic cocktails and linen napkins, and most importantly, homemade food. It is the sort of affair that wraps you up in a long, restful lazy day adventure fueled with time-honored tradition and attention to detail. It discourages anything fast or obtuse- like technology and frenzied time schedules and plastic utensils,” Mansfield says. “It champions a slower, simpler and more relaxing rhythm. The type of experience that not only feeds your appetite but also your senses, your spirit and your sanity. Basically, a vintage-style picnic is a big, long break in your day meant for resting, relaxing and restoring through small details… the time-worn touch of an old plate, the taste of an heirloom recipe, the time-out of technology, and the tune in to your natural surroundings. 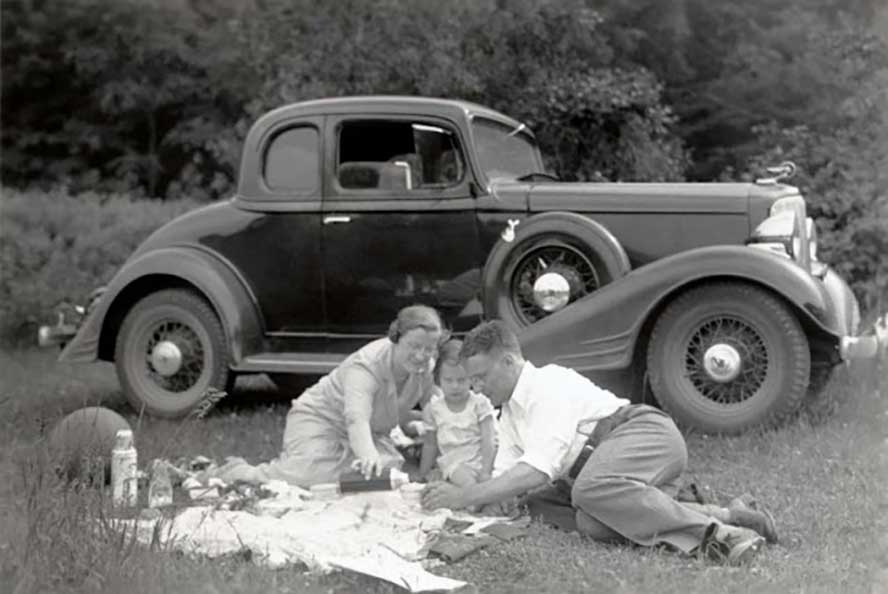 Picnic in the countryside in 1933

A family enjoying a summer picnic in the countryside in 1933. (Image courtesy of Vintage Everyday) 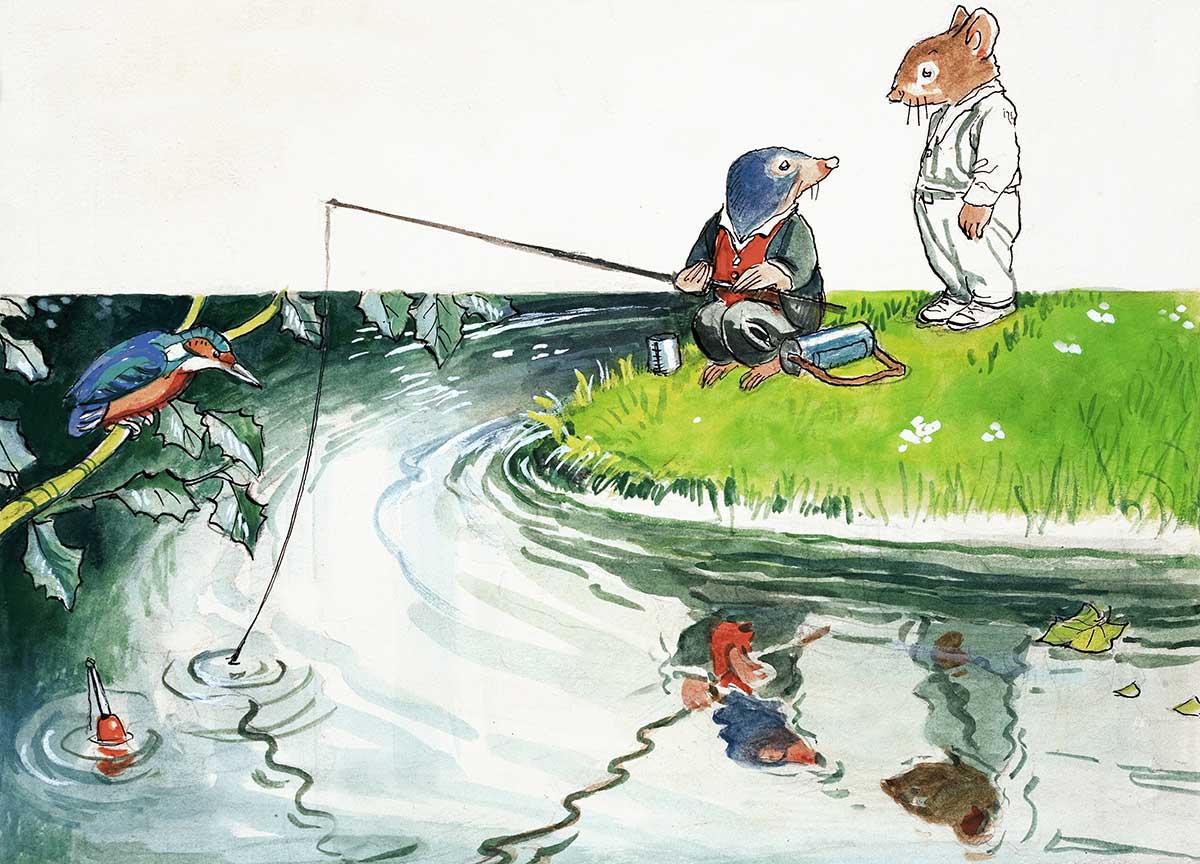 Kenneth Grahame’s “The Wind in the Willows” (1908) is one example of the presence of picnics in literature. (Image courtesy of Philip Mendoza, Bridgeman Images) 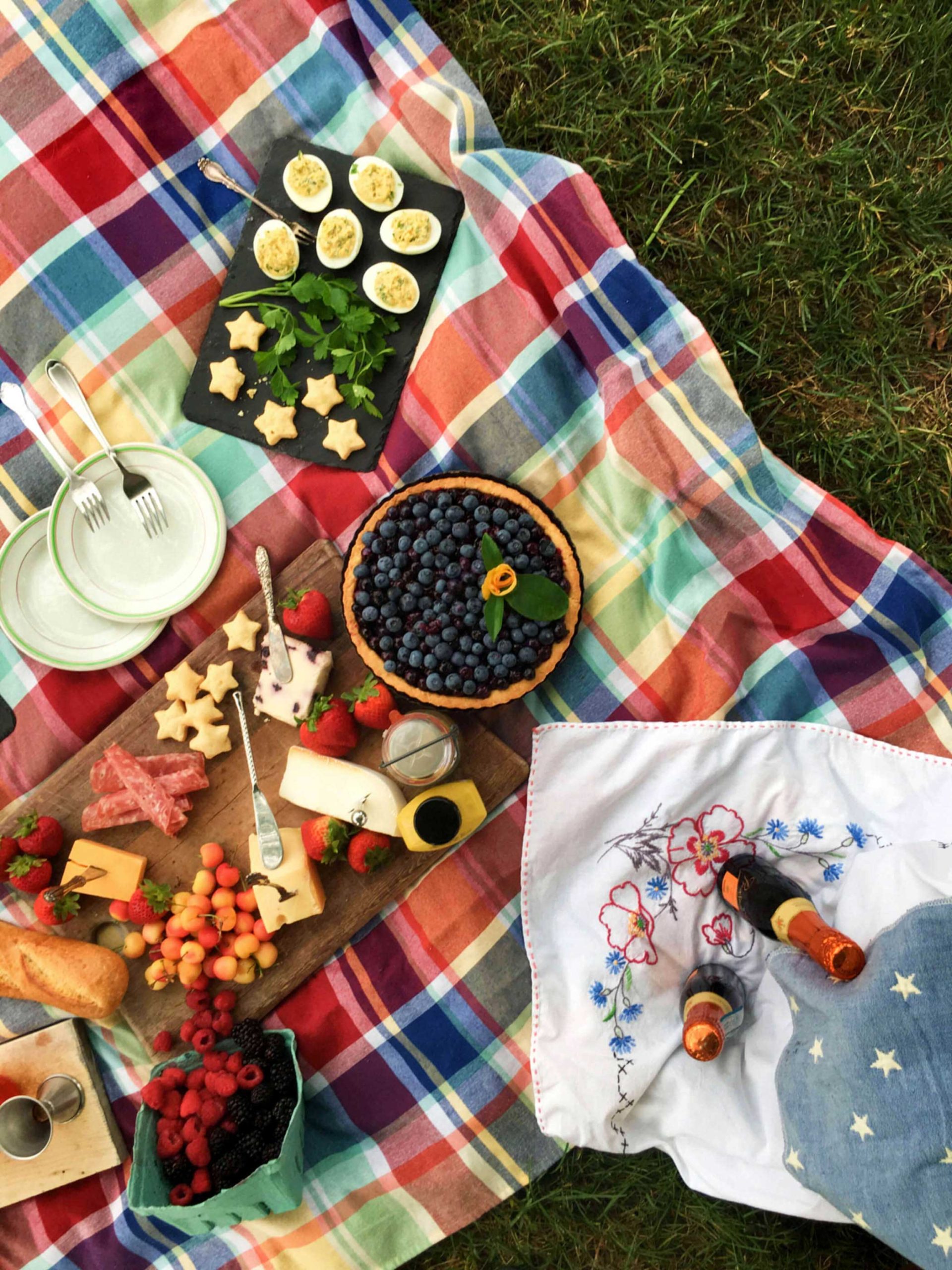 You can pack whatever you’d like into your summer picnic basket, but for a vintage picnic feel, you can include classic foods such as deviled eggs, fruit tarts and wine and cheese. (Image courtesy of In The Vintage Kitchen)

All the standard treats

Much like the location and look of picnics have evolved, so too have the foods enjoyed at such relaxing outings.
The types of foods that we commonly associate with a picnic fell into favor with picnickers in the mid-20th century, according to Mansfield.

“By the time the mid-20th century rolled around, there was a definite type of picnic fare anticipated and defined by the activity,” Mansfield writes. “Fried chicken, salads and deviled eggs topped the favorites list, along with hot dogs, sandwiches, pies, cakes, bread and fruit.”

“Eating is a ceremonial act,” she says. “The art of the vintage picnic reminds us of that. Just as it has in the past and will continue to do so in the future.” 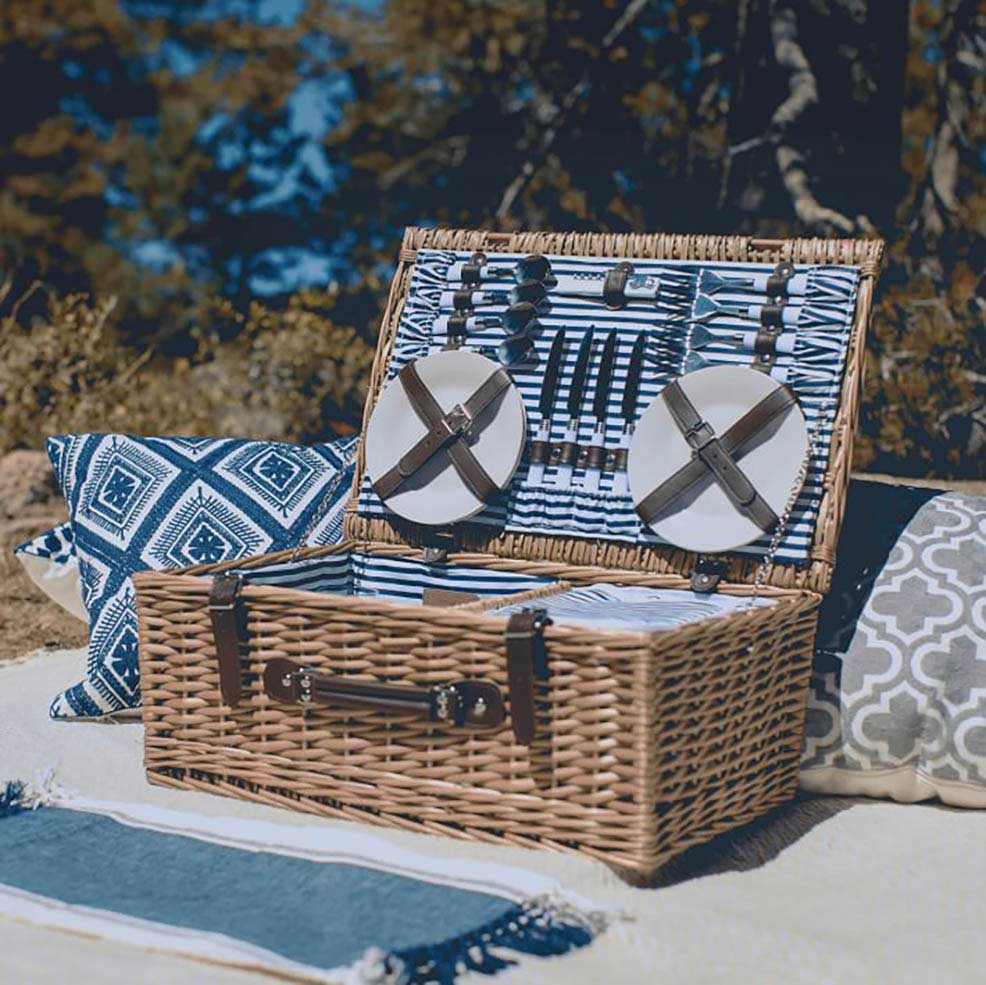 Vintage and vintage-inspired picnic baskets are readily available on websites like Etsy. They usually sell for around $100 or so. This basket, complete with place settings for two, sells for $100 on Westelm.com. (Image courtesy of West Elm)