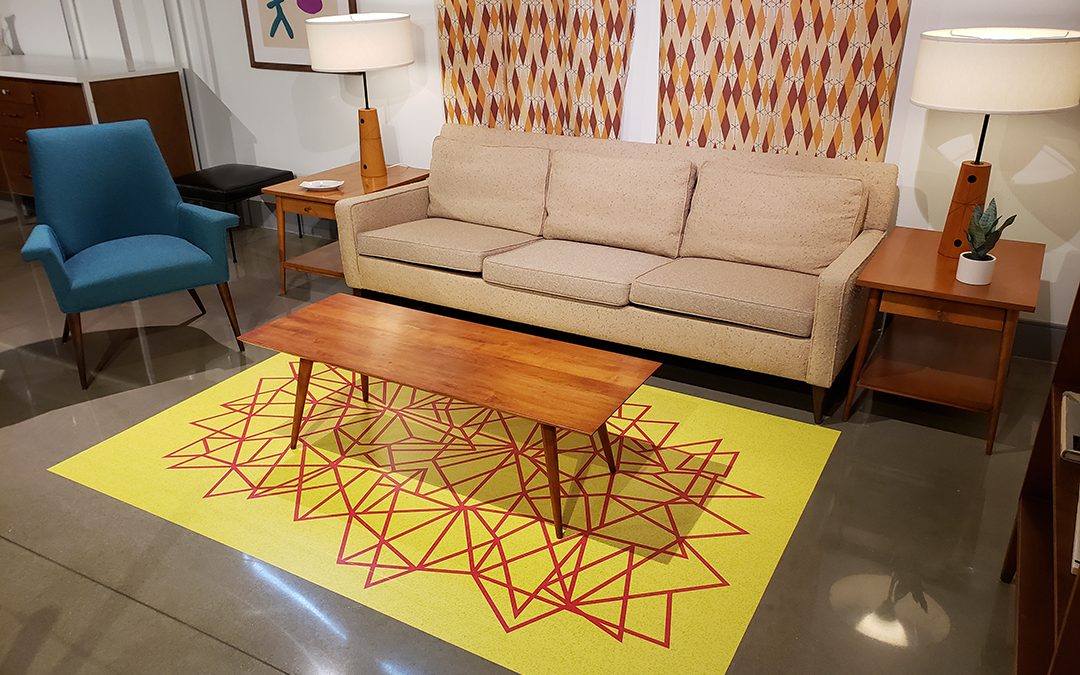 The Johnson County (KS) Museum has brought back the simplicity and style of midcentury modern design with its exhibit on industrial designer Paul McCobb.
The museum’s exhibit, Paul McCobb: American Designer, which opened in May and runs through Jan. 8, 2022, features several pieces from the personal collection of Kansas City area resident Samuel Hildreth, showcasing McCobb’s versatility as a midcentury modern designer and his legacy as a man who filled postwar houses with items that pieced together the American Dream.
Characterized by clean, simple lines, the Midcentury Modern design movement, which lasted from the end of World War II until the late 1960s, eschewed any embellishments in decoration. Perhaps best known for his forward-thinking furniture designs, McCobb, one of the most easily recognizable designers of the midcentury modern period, was the creator of so much more, one museum administrator says.
“Paul McCobb was much more than a furniture designer. In fact, he preferred to be called an industrial designer, and those are people who design for lifestyles – not just furniture,” says Andrew Gustafson, curator of interpretation for the Johnson County Museum. “He did textiles, tiles, lamps, warming trays, china, drinking cups, radios, TV sets, air conditioning units, structures for world fairs, a really impressive array of things. Like other industrial designers, he was trying to change the way people lived, to simplify their lives, to make things very versatile and very easy.” 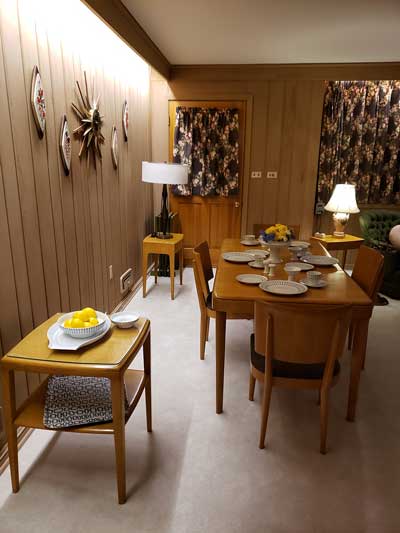 Several Paul McCobb furniture pieces have been incorporated Into this 1954 All-Electric House, on permanent display at the Johnson County Museum. 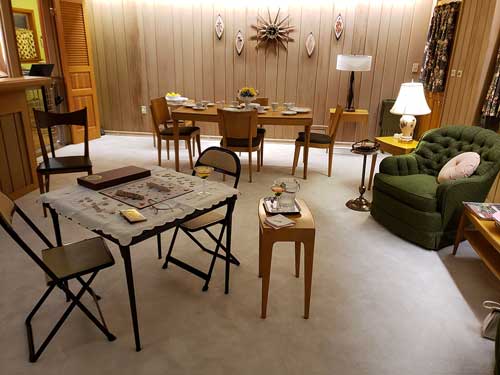 The All-Electric House on display at the Johnson County Museum, in which several Paul McCobb
pieces can be seen, will soon be redecorated for the Christmas holiday.

Designing the basics of midcentury life

Paul McCobb was born in Massachusetts in 1917 and embraced art at an early age. After serving a short stint in the U.S. Army at the height of World War II, McCobb moved to New York City, where he found work as a decorating consultant for a furniture store. In the 1950s, he would join the Planner and Directional furniture lines as a business partner In addition to his furniture designs, McCobb also joined forces with such household names as CBS-Columbia, designing radios and television sets, and Bell & Howell, for whom he designed hi-fi consoles.
McCobb died in 1969 at the age of 51; his designs can still be easily found on auction websites and antiques websites.
Gustafson says that for the current exhibit, Hildreth approached museum administrators and pitched the idea. It was, Gustafson recalls, an easy sell.
“(Hildreth) said, ‘I have this amazing collection. It might be worth checking out to include in one of your exhibits,’ and so we did,” Gustafson says. “We checked out this huge array of pieces. We said, ‘Sam, you’ve got everything but the kitchen sink!’”
As the pieces that would make up the exhibit were carefully transported to the museum, Gustafson says he and his colleagues agreed that the installment would be a success. After all, most people have seen McCobb’s work before, even though they might not have even known it at the time.
“Besides the collection being local, Paul McCobb was designing for the entire United States. His pieces were in department stores, they were available in high-end show rooms,” Gustafson says. “He had something that would fit your needs. His furniture is very recognizable. People would recognize these pieces from their parents’ or grandparents’ homes. All of those things together made him a great choice for us.” 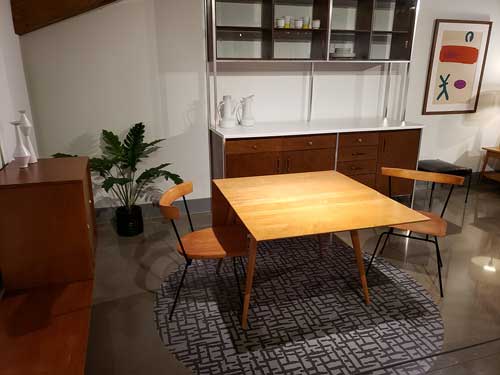 Gustafson says that due to the size of the exhibition space, staff had to be especially strategic about choosing which McCobb pieces to showcase from Hildreth’s diverse collection.
“Our exhibit space has some limitations. We’re only 1,450 square feet, so it’s not a huge space,” he says. “We had to keep in mind that we have a lot of children and families who come through here, so how can we display things safely? That’s why we chose to do sets behind wires. We alos wanted to display the variety of things McCobb made.”
More and more merchants and vendors have begun reproducing McCobb pieces as the trend toward minimalism in design has gained favor with the public in recent years, Gustafson adds. McCobb’s furniture is a perfect example of items that fit into such a minimalist home, both then and now.
“They’re sleek, they’re clean,” Gustafson says of McCobb’s furniture designs. “Johnson County has lots of postwar houses — in all of those homes, these pieces would be appropriate. People don’t want a lot of clutter. If you want to declutter, this is the style to have. (McCobb) used natural woods, natural fabrics, and he used the postwar color palette. He loved the color lemon yellow, so that features in our big sign (at the exhibit’s entrance). All of those things are popular; people tend to be comfortable around those things.”

Those feelings of comfort and familiarity reveal themselves in a feedback wall, on which visitors to the exhibit may scrawl their review on a Post-It note and affix it to the wall as they leave the exhibition space.
“People are really responding,” Gustafson says, gesturing at the feedback wall, dotted with small, pink pieces of paper. “Midcentury Modern design is popular again.”
The presentation of McCobb’s works doesn’t end at the exhibit itself. Some McCobb pieces have also been incorporated into the museum’s permanent installments, most notably its 1950s All-Electric House. The house, built in 1954 by Kansas City Power and Light Co., was hailed as the pinnacle of “modern American family living” and the type of home families would pursue as they moved into America’s suburbs. The house was physically moved from two of its previous locations around the county, Gustafson says, before being modified and settled into the museum’s permanent collection. By the time it was donated to the museum in 1994, five families had lived in it. 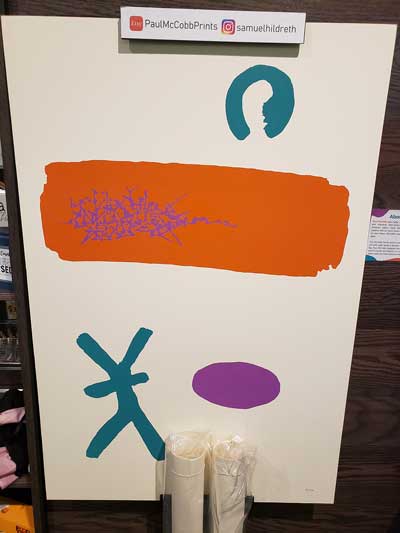 Paul McCobb created this abstract painting for his family’s 1960 Christmas card. The image appears in the McCobb exhibit and on posters for sale in the Johnson County Museum’s new gift shop. 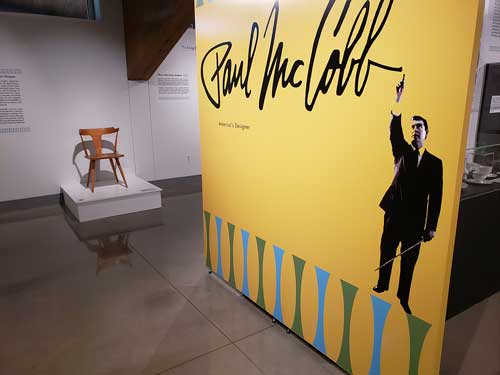 The sign at the entrance to the exhibit Paul McCobb: American Designer, now on
display at the Johnson County Museum in Overland Park, KS, prominently features
the color lemon yellow, a favorite of McCobb himself.

According to Johnson County’s Parks and Recreation Department, the house and others like it were marketed as “the lazy man’s paradise” – electrical outlets could be found along baseboards every three feet in any given room in the house, electrical switches opened and closed the living room curtains, and built-in speakers meant the family was able to watch TV from their own patio, and a special switch above the living room fireplace opens a painting to reveal a black-and-white television set.
In recent months, Gustafson says, some McCobb pieces have been incorporated into the living room’s setup, including chairs, tables and lamps. The museum’s staff makes seasonal changes to the house’s decorations, too – for the Christmas season, for instance, a silver aluminum Christmas tree will be put up in the living room. Students and faculty members from nearby Johnson County Community College’s Department of Fashion Merchandising will get in on the holiday fun, too, bringing in some wardrobes to create a scene of a holiday cocktail party. On Dec. 2, the fashion merchandising students and faculty members will be on site to discuss the pieces on display, Gustafson adds.
Visitors to the museum can take a bit of McCobb home with them, Gustafson says. In the museum’s brand-new gift shop, a variety of items related to the exhibit are being sold, with the most notable being a poster bearing the design of a Christmas card designed by McCobb himself, an abstract piece in violet, orange and teal.
Gustafson says there is still plenty of time in which to visit the museum for the holiday season and to discover (or rediscover) the designs of Paul McCobb.
“Our museum is one of the first to do an exhibit just on McCobb,” Gustafson says. “There are some real gems here.”
For more information, call 913-826-2787 or visit www.jcprd.com/434/Special-Exhibitions.