If you had to think of the most iconic Valentine’s Day candy, it’s likely that those chalky, pastel-colored conversation hearts would come to mind – and their history is richer than the contents of a Whitman’s Sampler.
And if you think the candies taste similar to NECCO Wafers, that’s because they were actually invented by NECCO in 1866. The makeup of the candy is simple – just corn syrup, sugar, gelatin, and coloring, baked into a dough and then flattened and cut into small heart shapes with cute sayings painted on.

A sweet cure for what ails you

The precursor to conversation hearts were lozenges sold in apothecaries across the country. They were administered for a variety of ailments – even bad breath. The American public enjoyed them because they were so sweet – the fact that they were sold as a cure-all almost seemed like a secondary benefit.

The booming lozenge industry benefitted from the Industrial Revolution in the 19th century, which saw steam-powered machinery able to mass-produce everyday items at a faster rate than workers ever could by hand. In 1847, one Massachusetts pharmacist, Oliver Chase, had the idea of inventing a machine that would produce the hard-to-make lozenges at a rapid pace. Oliver’s machine rolled out, flattened, and cut the dough into small disc shapes. Today, historians consider Oliver’s invention to be the very first candy-making machine. 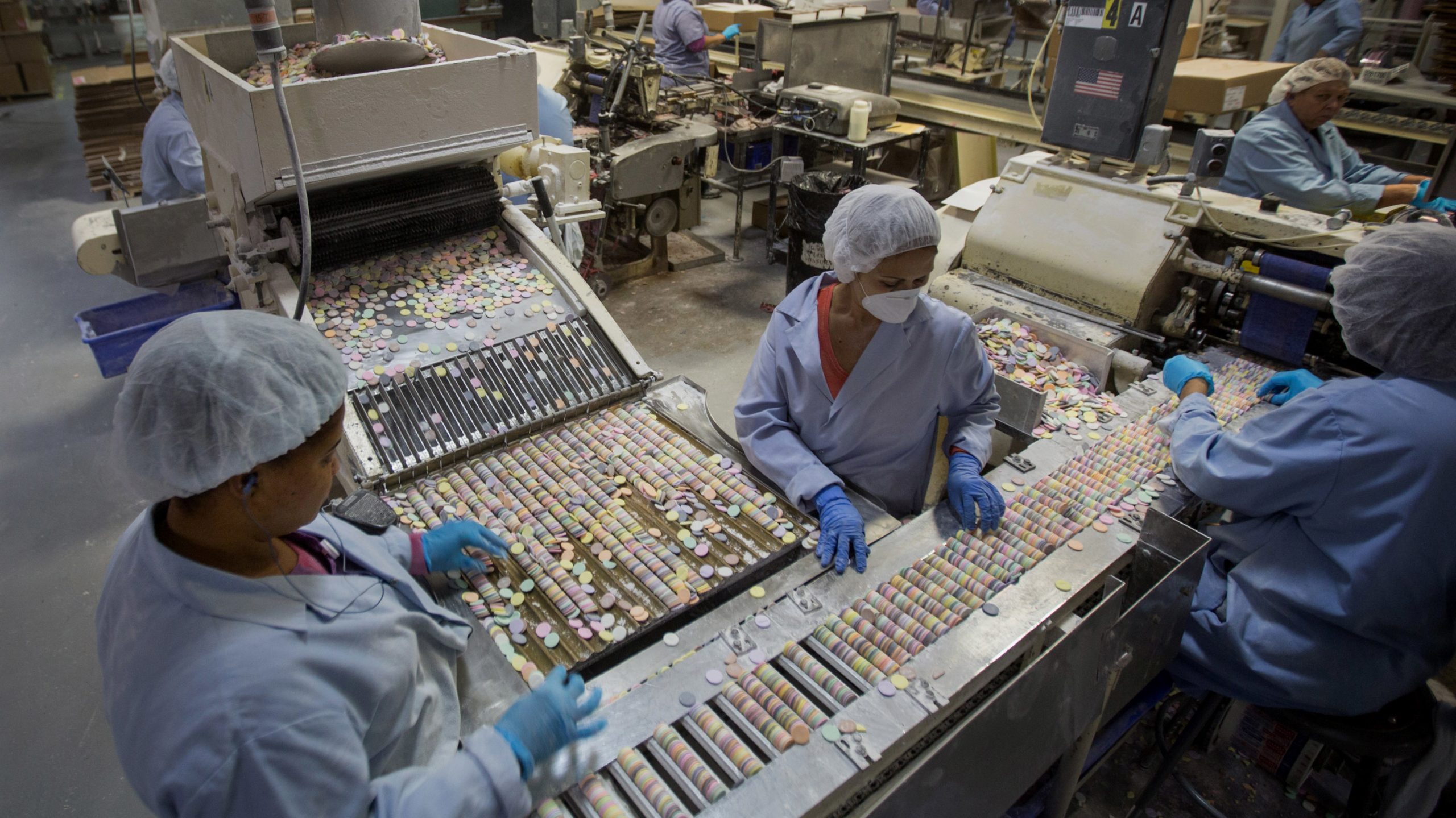 NECCO, the company that made NECCO Wafers as well as Conversation Hearts, filed for bankruptcy in 2018. The company that bought NECCO, Spangler, eventually began making the candies, but only a portion of the candies contained the small messages to which buyers were accustomed. (Image courtesy of NPR)

Chase and his brother Silas set their focus on the confectionary industry, and their business, Chase & Co., merged with several other companies to form the New England Confectionary Company – or NECCO.

Now that the process of actually producing the lozenges had been made easier, the Chase brothers decided to market the small discs as candies instead of medicine, and they wanted the ability to print small sayings on them as well. Another Chase brother, Daniel, invented a machine that would make this goal a reality – his machine could press sayings onto the candies using a red dye. 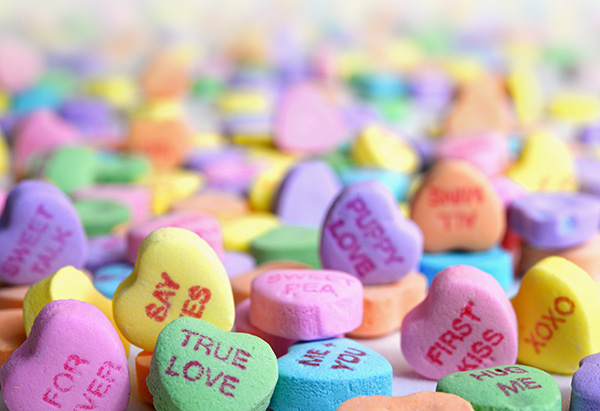 Conversation Hearts were given their popular heart shape in 1902. (Photo by Laura Ockel on Unsplash )

My heart belongs to you

Next came the idea of a different shape. The earliest lozenges resembled the marshmallows you might later find in Lucky Charms cereal – horseshoes, clovers, and the like. But with the rise of popularity in the Valentine’s Day holiday in the early 20th century, the Chase brothers decided that the candy should be marketed for the special holiday. In 1902, the candy began to be produced only in the shape of a heart.

The candies, which became known as “conversation hearts,” proved to be an immediate hit. Early sayings that were pressed onto the candies included, “Please be considerate” and “Marry Me.” Larger versions of the candy hearts even bore the lengthier message, “Please send a lock of your hair by return mail” (during the Victorian era, hair relics were a popular declaration of love as well as a memento of a deceased loved one, kept by bereaved family members).

Though the taste and texture have remained largely the same over the years, the candy’s messages have kept up with the times. Since the 1990s, around 60 messages have found their way onto the candies, including “LOL” and other such acronyms synonymous with the Digital Age. Other, older sayings that have become dated are removed from the list regularly.

Falling out of favor

The contemporary popularity of the candy, however, has proven to be divisive, with just as many critics as fans these days.

“Why do we need chalky, dusty, and tasteless candy for a day about love?” blogger Sarah Perchikoff wrote in 2020. “Surely, there are better ways to say ‘Love You’ or ‘Be Mine’ than on a gross, heart-shaped candy. We can do better, right?”

Although NECCO went bankrupt in 2018, the company that bought NECCO, Spangler, has taken up the mantle of producing and selling the tiny candies – and business, it would seem, is on the decline.

It took Spangler a little more than a year to get its footing as far as production of the conversation hearts goes – the company didn’t produce or sell them at all in 2019, but competitor Brach’s did. Even after the 2019 shortage, consumers found that Spangler’s version of the candy not only looked different from its original counterpart – the candies looked different, too, with only a small percentage bearing pressed-on messages (the machine that pressed the messages onto the candies required repair, which wasn’t exactly high on the company’s budgetary priorities). After years of the industry churning out an average of 19 million pounds of the candies each year, sales of conversation hearts were down industrywide by about 24% in 2021.

Before the company folded, even NECCO itself seemed to admit that the candy’s best days were behind it, and that it now was bought due in large part to nostalgia. “Our main market is in classrooms – kids, teachers, and moms,” the company’s marketing director admitted in a 2011 interview.

“Be Mine”? For candy conversation hearts these days, fewer consumers are responding to that plea in the affirmative.