The Christmas season is a feast for the senses – watching the twinkle of colored light displays, the sound of tearing open wrapped gifts, and the smell and feel of a freshly decorated fir. And one affordable collectible helps bring the taste of Christmas to every kitchen – cookie cutters.

The tool found in every baker’s arsenal can be traced back roughly 700 years, to the 1400s, when they were invented in Italy and known as “imprint cutters.” Like many Christmas traditions, the imprint cutter evolved to become used widely in Germany and Holland, where housewives used them during the Christmas holiday to bake cookies in the shapes of doves, eagles, and human figures, according to Collectors Weekly. Those earliest cookie cutters were made of wood.

When they immigrated to the New World, those same German settlers who worked as tinsmiths crafted cutters made of cheap tin, and the shapes in which they were produced now included stars, spades, and hearts, as well as reindeer and clowns.

“Old tin can be identified from modern metals as it is relatively heavy and thick, usually darkened in color. These cutters make 3/4-inch to 1 1/8-inch-deep cuts,” according to Collectors Weekly. “The back of antique cutters are flat and may or may not have strap handles. Because tinsmiths tried to conserve every possible inch of metal they could, older backs are more or less cut to the shape of the cutting edge. These also have ‘air holes’ or ‘push holes,’ which helped detach the cookie dough from the cutter.”

Those cookie cutters made for the Christmas season were also made to be decorative, writes collector Kate Miller-Wilson for the antique blog Love to Know.

“As the idea of Christmas cookies spread throughout the Colonies, tinsmiths created Christmas-themed cutters that created cookies meant to be hung on Christmas trees. It wasn’t until the 1930s that the tradition of leaving cookies for Santa was established,” Miller-Wilson writes. ”Antique Christmas cookie cutters vary in value from a few dollars to over $100. In addition to the condition and age of the cookie cutter, size can also play a role in the value. For example, an extra-large, German-made Santa cookie cutter sold for about $80.”

Metal cookie cutters made in the 19th century can be found in antique stores and online – they were easily mass-produced, thanks to technological innovations made during the Industrial Revolution. These cookie cutters had handles made of metal or wood.
Aluminum cutters began to be produced around the turn of the century, with the most common coming from the 1930s.
“Metal cookie cutters with ‘bullet’ handles are especially sought after by collectors,” Collectors Weekly states. “In general, figurals like chickens and elephants tend to be more valuable than geometric shapes.”

These cutters weren’t just for cookies, however; in the early 20th century, they were made in the shapes of diamonds, hearts, spades, and diamonds – the four suites of playing cards – and made for sandwiches served at poker or bridge games. 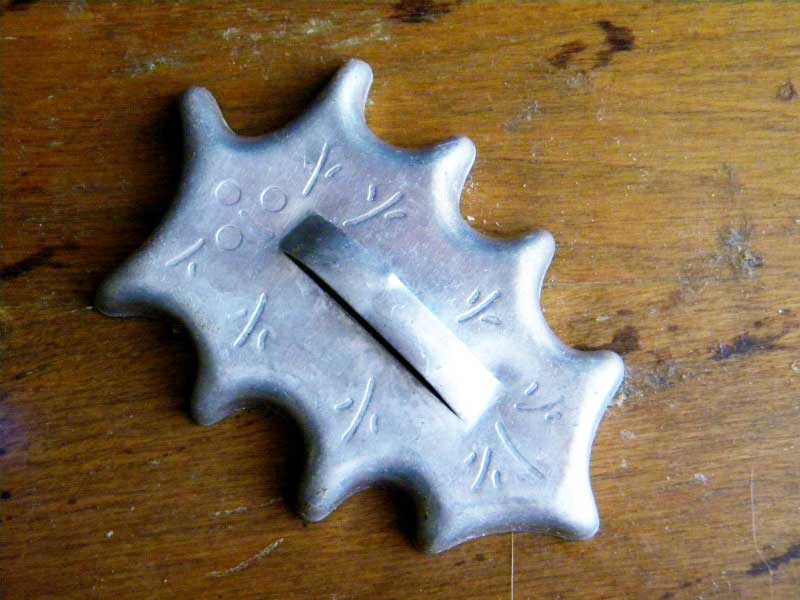 A vintage aluminum cookie cutter in the shape of a holly leaf. (Image courtesy of Love to Know)

Tin and plastic cookie cutters came in a variety of colors in the mid-20th century. British company Tala revolutionized the market by designing cookie cutters of different sizes that nested within one another. Major American companies that manufactured similar cookie cutters, meanwhile, included Midwestern Home Products, Ekco, and Kansas City-based Hallmark. Those cookie cutters sold by Hallmark in the late 1970s and early 1980s are especially collectible, Collectors Weekly reports.

“Recently, collectors have gravitated toward plastic cutters that advertise businesses,” the site states. “The vintage American cutters are marked ‘Made in the U.S.A.,’ while new ones are generally made in Hong Kong.”

Still, according to Miller-Wilson, those wishing to gift vintage cookie cutters as stocking stuffers shouldn’t expect to pay too much for these culinary tools.

“These little treasures are easy to find in antique stores, and they’re affordable to collect,” she writes. “They often sell for only a few dollars.”