Baby shoes from the 1880’s recall some sad family history

Baby shoes from the 1880’s recall some sad family history

My dad often referred to his seven siblings when recalling how the family split up when their parents died, and they were “farmed out” in 1900 to various aunts and uncles. But he seldom mentioned the ninth member of the family, William Albert Weyand, who was only two years old when he died in 1884.

Years later, when I discovered two pairs of baby shoes that had been saved with old photos and other family memorabilia, he told me they had belonged to his mother. When my parents died, the shoes remained with me, tiny reminders of my family, and their early struggles. Recently rediscovered, they had spent years hidden away as our family went about our lives.

Although my dad traced the shoes to his mother, I have a strong hunch they belonged to her late son, and she saved them to honor his memory. In the mid-1800s, when many babies died in infancy, E.D.E.N. Southworth, a novelist, wrote a short essay in Godey’s Lady’s Book on the subject, according to an article by Jeanne Gutierrez for the New York Historical Society. “There is no part of a baby’s wardrobe so suggestive and beautiful as the little shoes,” he wrote. Southworth’s essay made several references to grieving mothers who kept baby shoes in the 1800s. 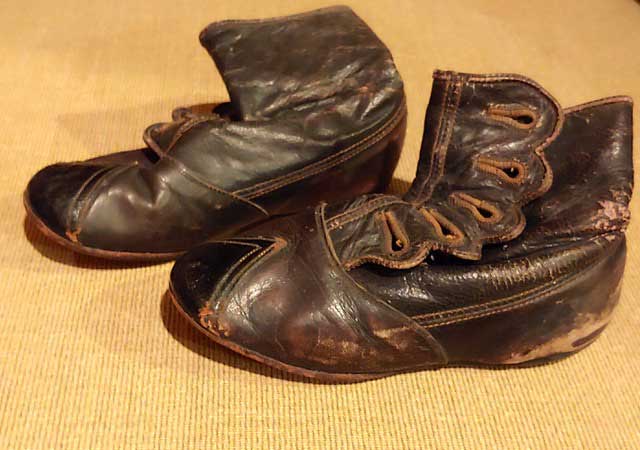 At the time of his death, my uncle may have worn these shoes, with five buttons. 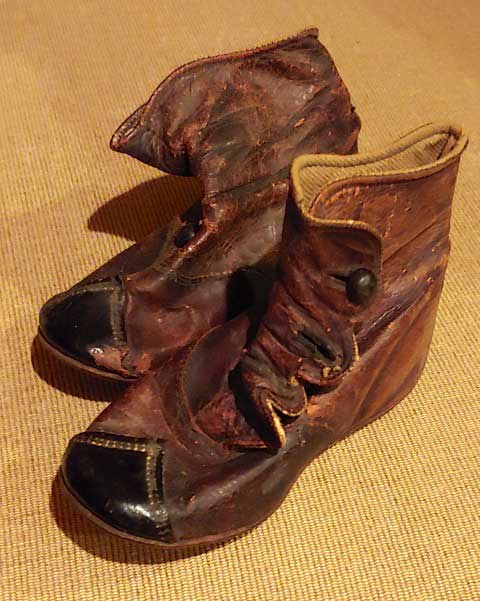 A far cry from today’s booties, these shoes were meant for infants but were made to look like miniatures of adult shoes.

My shoes were fastened by buttons, not laces. They vary in size, indicating one pair could have been worn by an infant, with four buttons. The other pair, about an inch long, was also higher and had six buttons. At least one button was missing on both pairs. Both had polished leather toes and hard leather soles. Unlike baby shoes of later eras, the shoes seemed to be designed not for comfort, but to be a miniature version of adult footwear.

There are few markings on the shoes to reveal the manufacturer. However, on both shoes, a small image etched into the sole, shows a tiny flower with petals. As the family often received gifts from my great-grandfather in Philadelphia, I’m guessing the manufacturer could have been Philly-based S. S. Sollers, a leading maker of children’s shoes in the 1800s. Advertising from another maker, John Mundell, & Co, announced they specialized in “solar-tipped shoes,” which could explain the polished leather on my two pairs. However, I could find no logos from either company that featured a flower petal. More research is needed.

November 2021​Vintage Discoveries​‘Single Tree’ was part of old-time farmingby Ken Weyand  Early in the 1940s, after years of “horse-farming,” my dad bought a tractor and sold his team of draft horses. Soon after that, much of the horse-drawn equipment was sold,...

END_OF_DOCUMENT_TOKEN_TO_BE_REPLACED

September 2019​Vintage DiscoveriesVisiting Chicago's Century of Progress Exposition, 1934by Ken Weyand  On Sept. 16, 1934, my mother, Mabel Weyand, and her parents, Charles and Carrie Forrester, boarded a train at Medill, MO, for Chicago to attend the Century of...

END_OF_DOCUMENT_TOKEN_TO_BE_REPLACED

~ October 2018 /  Traveling with Ken ~​Vintage DiscoveriesFlying 'back in time' in a vintage biplane  ~ by Ken Weyand ~  Flying in an open-cockpit biplane is a forgotten part of our history. It was an era when pilots flew "tail-dragger" aircraft from grass...

END_OF_DOCUMENT_TOKEN_TO_BE_REPLACED

~ December 2017 /  Traveling with Ken ~Vintage DiscoveriesOnly ghosts remain in Arkansas mining town  ~ by Ken Weyand ~  Unlike the many pop-ulated hamlets that dot the Ozarks countryside, the old mining town of Rush is a true ghost town. Located 16 miles...

END_OF_DOCUMENT_TOKEN_TO_BE_REPLACED

~ December 2016 /  Traveling with Ken ~Vintage DiscoveriesWill Rogers' birthplace, memorial museum worth a visit  ~ by Ken Weyand ~   One of the most famous Oklahoma natives to influence American culture was Will Rogers. Known as a “cowboy philosopher,”...